The walls of Kensington Palace may have a wealth of stories to tell of its royal occupants since the seventeenth century; William III, the young Queen Victoria and Princess Margaret, however it is unquestionably recognized for its symbolic role adopted by the public as a place of tribute after the tragic death of Diana, The Princess of Wales in 1997. The sea of flowers and sentiments outside the late Princess’s home are some of the most iconic images of the twentieth century and has since shaped public behaviour towards celebrity and Monarchy alike.
Tomorrow the doors of Kensington Palace will reopen after a year-long twelve million pound restoration project in time for the Queen’s Diamond Jubilee and Olympic Games, launching with the exhibition, Diana: Glimpses Of A Modern Princess. Installed in Apartment 1A where the late Princess resided, and scheduled to be the future home of The Duke and Duchess of Cambridge next year, the exhibition will reflect some of the most important and memorable moments in Diana’s public life and will focus on her iconic fashion and style. If the Grace Kelly: Image Of A Movie Star at the Victoria and Albert Museum, London or The Metropolitan Museum of Art’s Alexander McQueen: Savage Beauty is anything to go by, fashion sells both on the streets as well as in the galleries and will undoubtedly be a sell out show for Historical Royal Palaces who run the royal residence in West London. 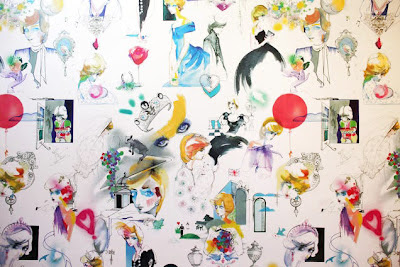 Dresses aside, the curators of the exhibition were intent to avoid a formal institutional display, perhaps conscious of the creative expectations that such showstoppers now command, and have commissioned contemporary illustrator Julie Verhoeven to produce a modern toile based on moments throughout the Princess’s life, incorporated into a wallpaper repeat pattern in a graphic collage in watercolour. 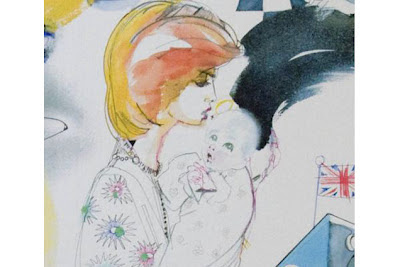 Diana with newborn Prince William
Drawing from photographs of Diana’s engagement announcement to Prince Charles, subsequent wedding, royal tours around the world and the last portraits to be shot by Mario Testino as well as architectural elements that resemble that of the palace or from Althorp, the resting place of the Princess at her ancestral home, Verhoeven employs her trademark technique to introduce a contemporary atmosphere within a loaded historical setting of both pomp and pop culture. While if a little naïve and childlike given the context of a woman in her prime, the style is resolutely Nineties, similar to the bright kitsch children’s wallpaper that I remember from the decade that was to be Diana’s last. 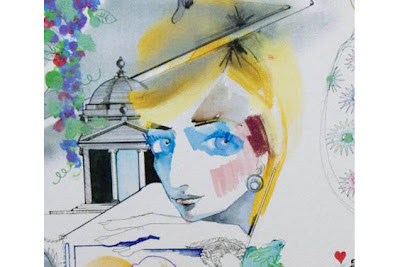 Diana shot by Mario Testino
Printed by hand in England by interiors firm and royal warrant holders Cole and Son who produce traditional period designs, the wallpaper will be installed throughout the exhibition in the palace’s State Rooms and will reflect the lasting influence in style and history of the Mother of the future King of England: whether this is the grande finale of a commercial chapter past in order to allow for chapters anew to evolve in the highs and lows of the dynasty of the Windsors is still to be seen. For now, memories of the past fuel what is a record period of public popularity and a right royal renaissance in the year where the matriarch of the British Monarchy celebrates sixty years on the throne.

Posted by Jonathan Velardi at 02:47