The polar opposite of stability must be the laborious act of moving home. When you have drugged your possessions as many times as I have, as if by magic that cardboard box suddenly transforms itself into a perfectly acceptable chest of drawers or side table and one surrenders, with little will left, to the cardboard-house-lifestyle that you have only just avoided or crossed over the street from when walking back home, albeit yours is under a roof.
I have realised there are items that make the last-in and first-out from my mobile side table - a habitual hierarchy of sorts; my most cherished photo frames, a fedora that was gifted to me when I used to live in Chicago (if it’s made it this far, a house move is not going to stand in its crease-free way) a pair of highball glasses and a gin bottle (moving is thirsty work) and lastly, my Keith Haring tome. This is no paperback and as someone who is known for their packing etiquette – heavy items at the bottom – I find myself keeping this weighty publication for last and first out. Is it the grinning triclops on the cover? The graffiti characters that dance around the page edges? The instant gratification of turning through the five hundred-plus pages of the artist’s colourful career? Put simply, it’s everything and much more. It lives on top of my old school trunk and as I work at my desk on my computer, all three eyes on the cover burn a hole in the side of my head and invite me for much needed distraction into a world of prolific artistic expression - the deep end of the inspiration pool for anyone interested in the birth of public art, street culture and graphic allegory that was pioneered by Haring in the late-twentieth century. 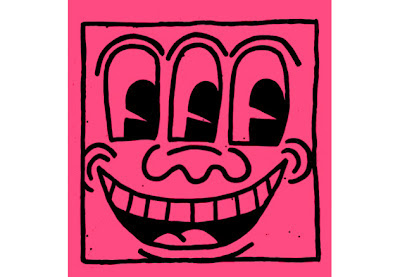 Keith Haring - Rizzoli, 2008
Today sees the opening of the first exhibition that explores the artist’s early career in Keith Haring: 1978-1982 at the Brooklyn Museum. With over three hundred objects and works on paper, experimental videos and a rare presentation of Haring’s personal sketchbooks and journals, which encapsulate the everyday life that inspired the artist, the exhibition guarantees to be an exciting journey into the art scene, subcultures and politics of New York City in the early Eighties through the eyes of an energised nineteen year old artist. Haring’s focus on bringing his recognisable style out of his studio and onto the streets is an important shift in viewing art as well as its accessibility to a wider commercial audience which is of particular interest in respect to my own art practice. What has to be one of the best uses of social media to date, in conjunction with the exhibition, The Keith Haring Foundation has created a Tumblr site and is posting pages from the artist’s journals every day up to the closing of the show. Lists, photographs and sketches make up the intimate visuals that inspired a young Haring who was at the beginning of creating a vocabulary of signs and codes that he was later to become famous for. Like anyone who knows they have a good thing going for them, Haring writes in his Secret Code Book No. 138QT,
“DANGER: keep out of reach of enemy agents and spies!!” 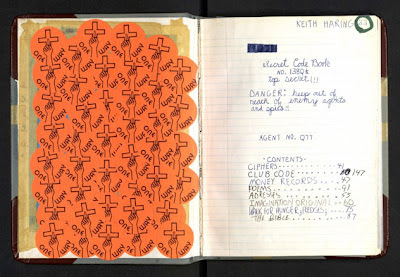 Thanks to the work of The Keith Haring Foundation, the late artist’s work is as provocative and relevant today as it was during his lifetime and continues to work on a number of contemporary collaborations and projects from the worlds of design and fashion - most recently Garage Magazine x Haring, Comme des Garçons Original x Haring and Colette x Case Scenario x Haring to name only a few - that attests to the graphic expression of the everyday into a symbolic legacy, page by page.

Images courtesy of The Keith Haring Foundation
Posted by Jonathan Velardi at 18:07