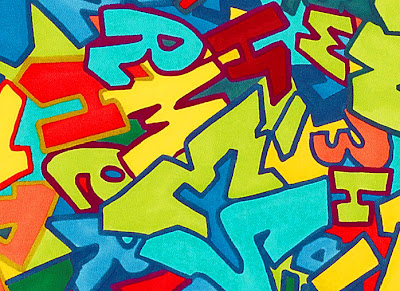 Renowned as the luxury capital of the world and equally famed for its graffiti culture, France embodies both #highlife and #lowlife of the everyday - where a fresh baguette for a Euro from the corner bakery can rival any accompaniment with a vintage bottle of Pétrus and therefore no surprise that high and low culture cross rues – 24 rue Faubourg Saint-Honoré to be precise, as Hermès has teamed up with banlieue graffiti artist Cyril ‘Kongo’ Phan for the luxury House’s latest carré collaboration for its Autumn/Winter 2011 collection. 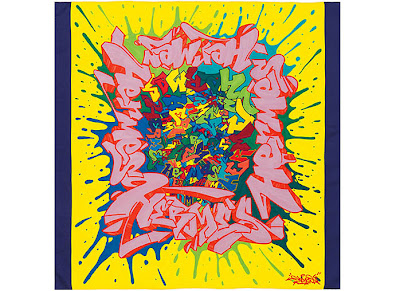 Hermès X Kongo Graff carré, 2011
The collaboration supports Kongo’s International Festival of Graffiti, of which the artist co-founded, as well as the graffiti artists’ collective Kosmopolis that will tour eight countries and provide opportunities for street artists to paint public murals in every city, all subsequently supported by proceeds from the Hermès X Kongo Graff carré that are now available at all Hermès boutiques. 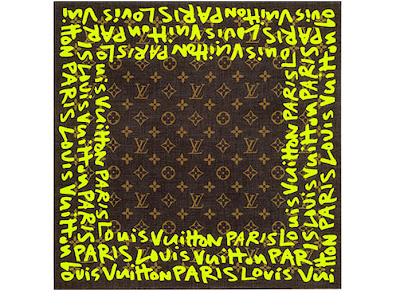 Louis Vuitton X Stephen Sprouse, 2009
Several coloruways in Kongo’s bold trademark tag designs have been produced onto the House’s finest silk scarves and while collaborations are not unfamiliar territory (Daniel Buren – Souvenirs For All Seasons October 2010), critics have been musing as to whether Hermès has sacrificed its subtle, sophisticated and timeless identity by working with a street artist to produce such loud and urban designs – words rarely associated with the cashmere furnishings and clemence leather trimmings usually associated with the brand. While the cause behind the collaboration is in tune with Hermès’s international support for the arts, direct comparison can be made with LVHM rival Louis Vuitton who collaborated with the late Eighties American artist Stephen Sprouse in 2009 that saw neon graffiti emblazoned on the label’s fashion and leather collections. Perhaps a message from one House to another amidst the stealth tactics that saw LVHM acquire a stake in the family-owned Hermès company over the last twelve months? If so, Hermès has chosen to take to the streets en force with Kongo’s colourful tags and accents that result in an exciting and unique direction for the classic luxury brand, succumbing to recent trends of extreme partnerships and dare I say it, edgy, making the then-contemporary Sprouse collaboration passé.
Look out for the new season’s window displays of graffiti murals composed of Hermès’s signature orange boxes and visit the World of Hermès for more information about the Graff carré and updates on the Kosmopolis tour.
Posted by Jonathan Velardi at 13:36