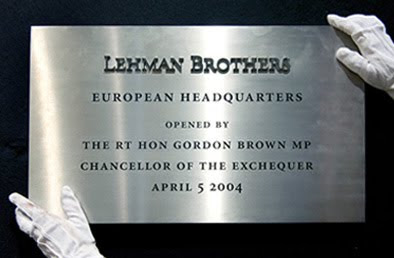 Christie's, London 2010
It has been eight years since London has seen anything like this - in 2002 Enron, the disgraced energy giant, was auctioning as much of the company's property as possible from their UK operations, with thousands of lots defining corporate taste, painting a picture of how the other half live. A lot has happened since then, with the public's taste turning into disdain at the very mention of the 'b' words (banks, bankers and bonuses) with society's finger pointing firmly at them to blame for the recession. Like an uninvited open house, interest in what the other half actually spend their money on creates much media fascination.

This week sees the auction of artwork and ephemera from the European arms of the brothers Lehman. Having filed for Chapter 11 bankruptcy in September 2008, the investment bank, Lehman Brothers are giving everyone the opportunity to purchase a little piece of history at Christie's in South Kensington, London. Yesterday I wandered through the auction rooms to view an interesting array of paintings, prints and objets d'art which adorned the company's London offices in Canary Wharf. From Post-War and Contemporary paintings, eighteenth-century French furniture and Chinois ceramics to Meissen porcelain figures, Persian carpets, Georgian tea caddies and lacquered cigar boxes, all hope to realise around two-million pounds and judging by the browsers yesterday there really is something for everybody. From the businessman eager to bid on a statement piece and his Stepford wife looking for furnishings to decorate their new country pile, to the antique dealer looking for a treasure; the young entrepreneur hoping to bag an investment or the typographer interested in the company's iconic sign that once lived above the front door - it was interesting to see that many people wanted to acquire something with a Lehman connection: a slice of Lehman's taste. Yesterday however was big league when you consider my visit to the advertising studio of Partners & Spade in the East Village, New York in early 2009 to view an exhibit about the then-freshly insolvent Lehman Brothers. There were no Old Masters here, instead, Partners & Spade were offering another aspect of the world of Lehman, like a time capsule of corporate narcissism: Lehman branded mugs, baseball caps, canvas bags and even baby clothes were displayed under glass like ancient artefacts of a plundered city.

The inevitable success of this Wednesday's auction will be down to the powerful image of Lehman employees vacating their offices two years ago, carrying their possessions in a cardboard box. Provenance is a great way to sell and the brothers Lehman have a good story and a story that is still making column inches after two years. Those bidding this week will have invested in good dinner talk and at the end of the day isn't that what it's all about? Because even the really bad lots will make anyone feel like they've trumped a bank and in today's climate, nothing can taste better than that. 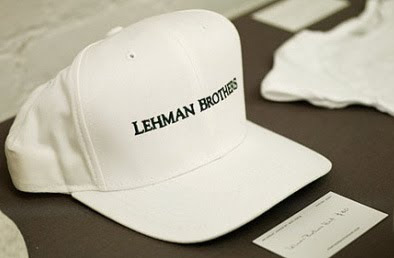