Courgettes or Zucchini? Lambrini or Laurent-Perrier? Ryanair or Riva? These are a few questions I have been thinking about after speaking with Hypothetically's guest editor, Nicola McCartney, before the issue launched last month. Nicola introduced me to French sociologist and philosopher, Pierre Bourdieu and I have been captivated by his pioneering investigations and theories regarding the dynamics and power relations in social life. I have particularly taken to Bourdieu's primary research around ethnography - his first book, Sociologie de L'Algerie (1962) - since this was the basis of my own research at The Slade. It is his later explorations concerning the developments in everyday life however, that relate as mush to my ethos as to my artistic practice today. I have been known to loosely throw the term 'cultural caché' around with little understanding of its power that Bourdieu explains in his classic work, Distinction: A Social Critique of the Judgement of Taste (La Distinction) (1984) that looks at social structures and places them into symbolic orders. Although an academic, Bourdieu was perceived in France's public eye to be one of the people - an accessible intellectual - and a theorist that confronted the reality of social issues unashamedly. Through the processes of image recognition and association within varying demographics of society, the worth of his findings led to the definitions of a person's capital - being social, economic and cultural. Class and social positioning was determined by the attitudes and choices of the everyday that Bourdieu would simplify with the revelation of one's style of furniture and clothing; what one would eat on a regular day and a special day, the type of music that was favoured. All of these examples were strong factors that lay outside the realm of previous studies that based results around the educational system. With these everyday results, Bourdieu discovered society's naked taste: a taste that had been inherited from one's surroundings by natural association that was, if subconsciously, pure of any interventions from unnatural surroundings that one may come across during childhood - a theory he termed, habitus. For Bourdieu, this was a case that was much more than economic distinction between social classes. One's primary social field defined one's path through life by means of familiarity and natural choice. To change fields by entering a higher or lower social bracket was not theoretically comfortable, affirming Bourdieu's controversial stance that financial labelling was not a sole factor for social advancement when the symbols of everyday life play an equal part. 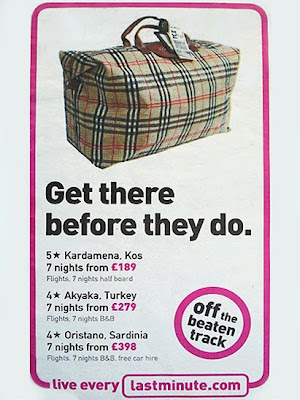 The image above is a good example of the type of visual recognition that plays a powerful role in our society, which advertisers profit from in abundance. Taken from a British newspaper between 2006-2007 in times of pre-recession and when British fashion house, Burberry were doing too well, becoming too accessible to the wrong type of social class, the lastminute.com "Get there before they do" campaign sells the idea that the wrong social class, a reference to the 'Chav' breed - borne from Labour's 'Cool Britannia' - were proving to be just as mobile as the middle and upper classes. The advertisement speaks to a more conservative class through the language of image association - an imitation Burberry check holdall - as a way of warning them to book their holiday sooner rather than later as well as opting for a more exotic destination that would not be on the they-in-question's geographical radar. 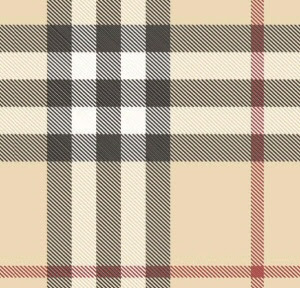 Brand backtrack: the Burberry check was invented in the 1920s
What is fascinating is that every aspect of society continues to follow the behaviours set out in La Distinction and without knowing it, the natural progression of society mirrors the cultural capital of individuals even in times when governments strive for change and social conflict persists. We only need to look back at the British General Election of last month and listen to the barrage of class distinction that was flung between the Labour and Conservative Party. I only had to log in to my Facebook account to gage the deep-rooted distain for private education (referring to Eton-alumni Prime Minister Cameron) that revolted many of my artistic colleagues. But aside from status-protest that clearly did not do them any good, the bourdieusian framework is everywhere. Whether we are drawn into the doors of Waitrose or Asda, paint our walls magnolia or arsenic green, go to art or medical school or even go to university at all, these are choices that although at the time may have felt foreign, were natural within our social field and continue to define our identity through social association.

I leave you with a story from my hometown, the Royal Borough of Windsor, Eton and Maidenhead. Taking association and bringing it to the political stage, was a recent campaign by the Royal Borough in the county of Berkshire, to dissassociate itself with the "SL" postcode - taken from neighbouring town Slough - famed by Poet Laureate, John Betjeman in his stanza,
.
Come friendly bombs and fall on Slough! / It isn't fit for humans now...
.
As he viewed the industrial town from the East Terrace at Royal residence, Windsor Castle in 1937. Unfortunately Slough's image has never recovered since and with ever-increasing petitions from residents in the Royal Borough to lose SL and replace it with "WM" (Windsor Maidenhead) for apparent reasons of economic and social amelioration, Bourdieu's theories are and will be forevermore du moment.

Visit INTRODUCING and jonathanvelardi.blogpspot.com  between 31st May - 6th June for more posts in conjunction with Hypothetically.
Posted by Jonathan Velardi at 02:49