The marking of the end of summer has always been for me the sight of revellers trudging around London’s mainline railway stations with their muddy Wellington boots and tall backpacks weighing down their posture, swaying to and fro towards their homebound platform after another year of festival excess. Swapping the comfort of warmth within four walls for a sleeping bag and a tent with a mind of its own has grown in popularity year on year with trends of summer festivals and stay-cations enticing urbanites into the dark depths of Nature’s womb. For some, camping remains a liberating exercise, free from inhibition and free from the continuous rhythms of commercial speech that engulf our urban landscape.
Yesterday evening, with gravity winning over the autumnal leaves, I made my way across the Thames to the opening of Ground Truth by Louisa Fairclough at Danielle Arnaud. Fairclough’s practice has always incorporated elements of analogue since a student at The Slade School of Fine Art in the late nineties and she had introduced me to 16mm and Super 8 film when she returned to the school as a tutor; her approach hearty and physical towards the equipment which was in contrast to my fear of pressing the wrong button and ending up with an empty reel. 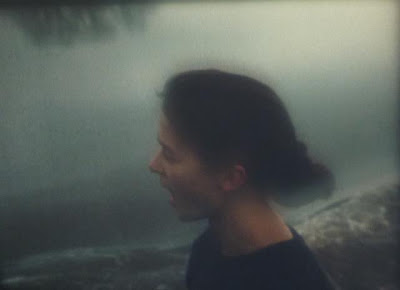 Bore Song, 2011
With the success of Tacita Dean’s Turbine Hall installation at Tate Modern there is no question analogue film is experiencing a renaissance in the public’s perception of contemporary art. Ground Truth – a geographical term of analogue land verification - consists of two film and sound installations as well as a series of drawings exhibited on the first floor of this Georgian terrace gallery. Fairclough, who is now based in the natural surroundings of Gloucester, has given sound an important role to play – it is the first sense that welcomes you into the space and it remains with you throughout the exhibition. Bore Song (2011) is a beautifully executed 16mm film loop of a young woman surrounded by the water of the River Severn projected onto a small slice of glass – she opens her mouth to a continuous piercing note that fills the space, the pitch reminiscent of analogue TV during midnight hours. In the moments of silence Song of Grief (2011), in the adjoining space, invites your attention with the same note emitting at different intervals. Two 16mm projectors face one another; their empty film is suspended and travels up and across the space to create a shimmering installation of white light and sound, creating a ghost-like and yet embracing atmosphere. Celluloid film has always possessed an additional layer of attention that the digital lacks. The artist is inherently conscious of exposure, frame and shot and while I have always respected the medium of film I have never experienced the reaction that I felt towards Fairclough’s new body of work. Intimate, poignant and raw, the works invite the viewer to access the artist’s personal expression of grief for the loss of a sibling as well as an account of her journey to the Severn by bicycle with her young son - genuine events in one’s life that have been reinterpreted in beautiful visuals and moving audio. 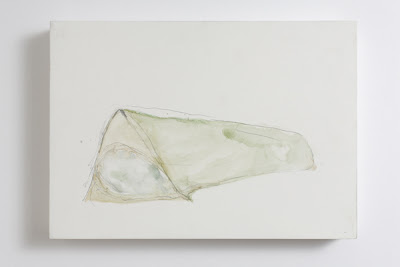 Ground Truth, 2011
Camping paraphernalia are the subject of the series of fourteen drawings that correspond to these bicycle journeys and the nights spent on the riverbanks under tents and in sleeping bags. The exhibition catalogue written by art critic and poet Cherry Smyth describes these drawings made of pencil, spit and watercolour as ‘a softly creeping calendar of grief’ and Smyth’s essay makes for a wonderful narration of the context behind Fairclough’s Ground Truth – a journey that began with escape and ended in confrontation across the natural landscape that is analogue in every sense of the word.

Ground Truth will run at Danielle Arnaud until 11th December - visit the gallery's website for further information about the exhibition and opening times. Louisa Fairclough was nominated for this year's Jerwood Drawing Prize and her drawing Ground Truth (2011), named after this exhibiton, is displayed on the first floor.

Images courtesy of Danielle Arnaud
Posted by Jonathan Velardi at 16:25