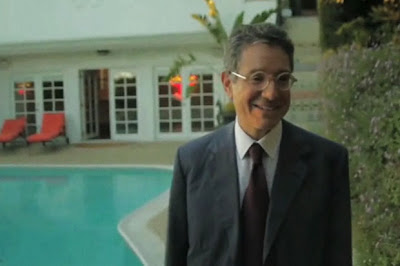 Money Maker - Jeffrey Deitch
"Celebrity has become, for better or for worse, an art form" states Jeffrey Deitch, Director of the Los Angeles Museum of Contemporary Art, in a recent interview with online luxury lifestyle resource, NOWNESS. I last reported on Deitch at the very beginning of the year after the announcement of his appointment as Director at MOCA, where he was to leave the contemporary art scene of Manhattan which he shaped with great success with his SoHo gallery Deitch Projects and take his assets - and address book - to the West Coast. It was hoped Deitch would reinvent the financially-troubled museum and create a scene in the City of Angels akin to his accomplishments as a collector, consultant and dealer of some of the world's most important contemporary and modern art activity.
If this film is anything to go by, it looks like Deitch has settled into his new life very well as he gives NOWNESS a tour of his "movie star house" in the hills of Los Feliz. You would be forgiven if you thought this was from an episode of MTV's Cribs - the Hip hop soundtrack and punchy camera shots may be absent but the tour possesses all the Cribs-credentials: the swooping driveway shot of the Spanish revival house that has been previously owned by actor, Cary Grant (tick); Deitch explaining his plans for a party room (tick) while he describes some of his art collection on the walls (tick), followed by a tour of his bedroom (tick). OK, so this episode is missing the default, "and this is where the magic happens", but we are invited to see Jesus in our eye lids thanks to his painting by Aaron Young, and maybe that works just as well for Mr. Deitch! Speaking about celebrity culture in reference to Jeff Koons, Richard Prince and Gilbert and George, Deitch is clearly fascinated when the worlds of art and entertainment meet (see my entry, Cover Girls) and there is no better place than in Hollywood to feed his interest with MOCA as his platform. This is an insightful view into the private and professional world of Jeffrey Deitch making himself part of the celebrity culture that he is hoping will drive the art market on the West Coast. In true celebrity fashion, Deitch doesn't give everything away and leaves us asking the most critical question of all... what's in your fridge?

Posted by Jonathan Velardi at 09:30