For over two hundred years Heal’s has offered homegrown craftsmanship on the British high street and has championed the best of young design talent in the country. Last month I was invited to the furniture emporium’s London flagship on Tottenham Court Road to preview their 2013 Autumn Collection with a host of exciting collaborations and emerging talent on display in the press showroom. 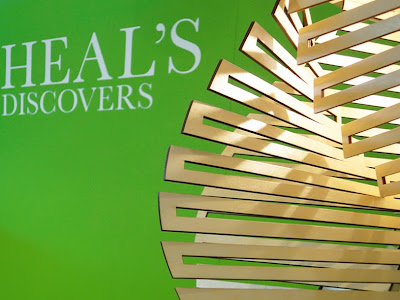 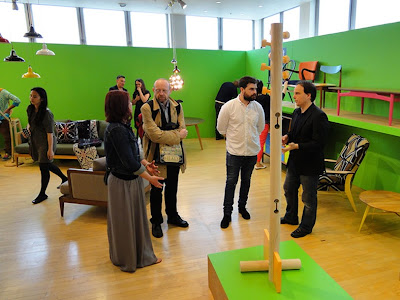 ‘Old icons meet future classics’ is the order of the season for the collection, which sees the reissue of iconic pieces by Ernest Race to the debuts works from young designers Ian Archer, Sebastian Cox and Matthew Elton, who feature under the annual Heal’s Discovers programme. Working around the themes of sustainability and contemporary craftsmanship, each designer presents an individual collection with an eye for heritage and quality that is certain to attract admirers across all tastes. Lee Broom, a Discovers alumnus himself from 2010, now features as a fully-fledged collaborator. After growing national and international success as a product designer, Broom has been commissioned to create a suite of upholstered furniture that will contribute to the Heal’s Designer Collaboration range. 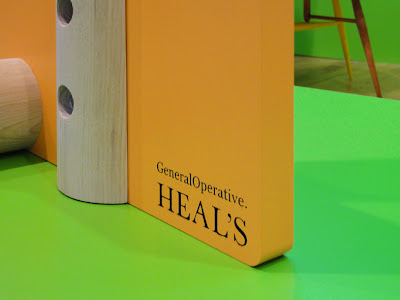 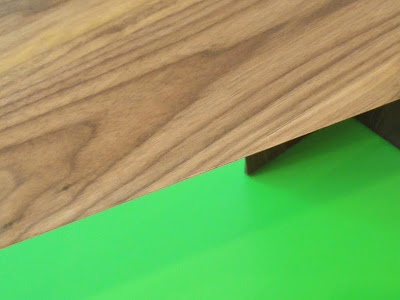 Such an aspiring journey will undoubtedly be on the minds of the four third-year students at London's Art, Architecture and Design Faculty, The Cass who are all in reaching distance of the winner’s prize that is the next up-and-coming design star who will have their product manufactured by Heal’s and showcased this year at the London Design Festival. 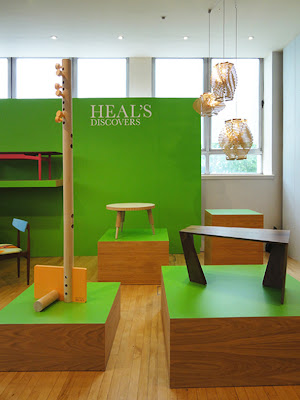 Heal’s Head of Furniture, Tim Ely selected four finalists from twenty-two applicants in the competition and it was a pleasure to have had the opportunity to meet the emerging quartert that were Alexander Mueller, Mika Ogarca, Douglas Montgomery and Michael Randall, to discuss both their practices and their Discovers experience to date. 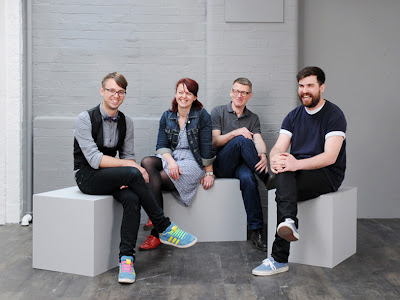 Heal's Discovers 2013: Alexander Mueller, Mika Ogarca, Douglas Montgomery and Michael Randall
Riding high on recent accolades from John Lewis’s very own Award for Design Excellence and Innovation, Mika described her personal experience to be far from the competitive atmosphere that most contests take, but as an invaluable opportunity to participate with her fellow Cass-alumni and be recognised by a British institution of interior design. Her laser-cut Twist lampshade in birch plywood is a wonderfully organic and practical product that places the customer at the centre of its construction by way of its flat-pack design. 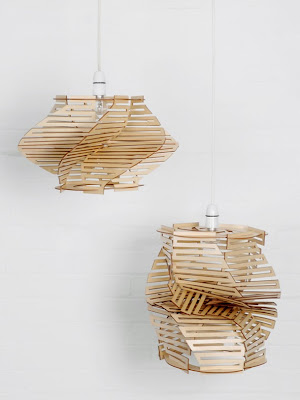 Twist by Mika Ogarca
Alexander and Douglas present their unique takes on a coffee table, sourcing Japanese origami and bygone manufacturing methods as inspiration, respectively. Alexander’s limited edition Fold coffee table in walnut, exudes craftsmanship in the details that cannot be seen – the fit of the tongue and groove joints seamlessly blend to create a stunning product in form and utility. 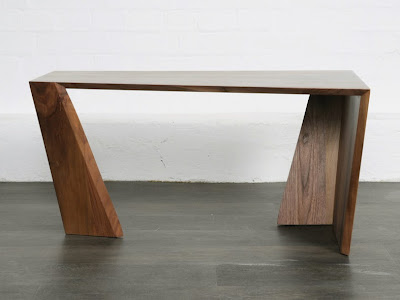 Fold by Alexander Mueller
The tactile result of Douglas’s Cog coffee table is taken from the cross-section of a classical column, balanced on three legs that highlight recent shifts in taste, away from the decorative and fussy styles such as barley twisting and fluting. Its reeded pins will positively command the affectionate caress of craft connoisseurs over many a brew. 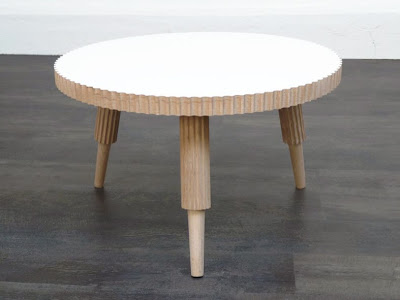 Cog by Douglas Montgomery
Last, but by no means least, Michael’s quest to identify a product that was overlooked in the home lead him to the humble coat stand. After describing The Cass’s liberal approach to design, au fait with contemporary art school teaching, as well as the group’s involvement at the Salone del Mobile in Milan earlier this year, his submission to the competition is the most conceptual in nature, sighting Native American totem poles as inspiration for his Totem coat stand. Moveable pegs may be slotted into a variety of holes available along the stand’s body in English ash. With a family as his customer in mind, Michael sees users adapting the coat stand to tell their own personal tales – a charming sentiment as the pegs follow a child’s growth. 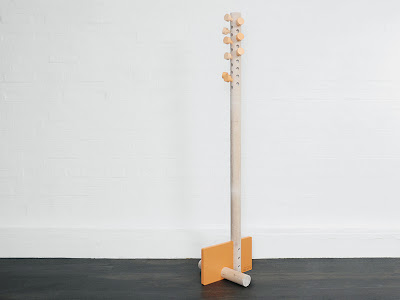 Totem by Michael Randall
The finalists' involvement with the Heal's Discovers collection will be determined by the public – hear the designers speak about their concepts in their own words in the video below. Votes may be cast for your favourite product online and the winner will be announced in-store at Heal’s Tottenham Court Road next month on 18th September in time for the London Design Festival.

The beautiful works of West London-based studio, DeGross Design & Innovation caught my eye and I very much enjoyed speaking with co-founder Sabrina Gross, who introduced me to the studio’s Utrem Lux series of upcycled lamps made from discarded glass bottles in warm hues of brown and mustard. 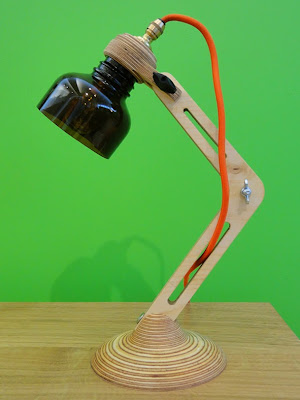 Utrem Lux table lamp by DeGross Design & Innovation
The bottles’ body, with its delightful handle detail, are elegantly constructed into adjustable wall, ceiling and base fixtures, which are produced by hand and finished off with on-trend, colourful power cords. The Utrem Lux series will be available at Heal’s newly remodelled Lighting Department at Tottenham Court Road.

Also being showcased this Autumn are charitable social enterprise Out of the Dark. Followers of my blog will remember my visit to their High Wycombe showroom and studio earlier this year (Interior Confidence, March 2013) - it was brilliant to see founders Jay and Jade again, in front of their seductive wall of furniture all restored and revamped by their young apprentices and sitting proudly under the roof of the institution that is Heal's. 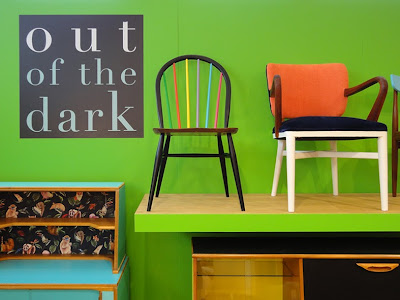 Working with names that would have been sold at the store during the Fifties and Sixties, pieces by G-Plan, Ercol and Parker Knoll will be given the Out of the Dark touch of bold, colour blocking and will be showcased in the flagship’s street-level window display along Tottenham Court Road. 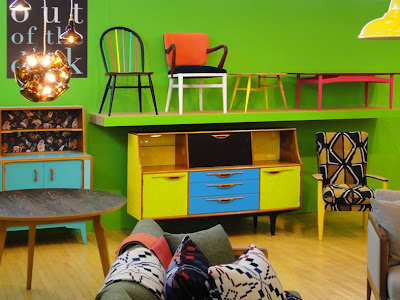 Out of the Dark's furniture will be on sale from 5th August to 22nd September and the team will run a series of weekend workshops for upcycle enthusiasts as well as a children's toy-painting session. They will join the Discovers collection to form part of Heal’s central showcase for the London Design Festival between 14th and 22nd September 2013. 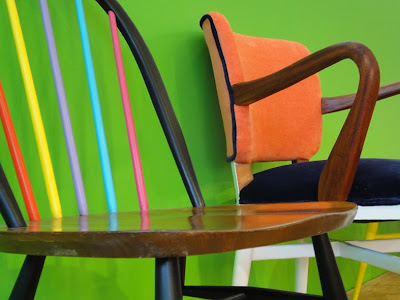 For more information about the Heal’s Discovers range and associated events this Autumn visit heals.co.uk - click here for details about this year’s London Design Festival.


Best of luck to all four finalists competing to win the Heal’s Discovers competition - visit the voting page here to cast your vote - and follow @JMVELARDI for the latest news, updates and winner to be announced next month.