After double digit visits, I only wish I had the time to write double digit reviews on the gloriously resonant retrospective in both image and sound, that is The Victoria & Albert Museum’s David Bowie Is exhibition. Curated by Geoffrey March and Victoria Broackes and designed by 59 Productions, the sensory journey of the life and times of Mr David Robert Jones through the bounteous items of memorabilia from the David Bowie Archive can only be described as a privilege, exemplified by the daily queues that have wrapped around the museum every morning in South Kensington since its opening in March of this year.


Unfortunately time has not crawled, and the curtains will draw on David Bowie Is this weekend. It was impossible not to obsess over a new item after every visit – the detail in both object and curation was a seductive match that undoubtedly fed Bowie die-hards and culture vultures old and new alike. A pioneer across multiple mediums and over many decades in the twentieth and twenty-first centuries, the exhibition does justice to its iconic subject and amongst the sketches, the art, the bodysuits, the euphoric visual space projecting music videos and concert highlights – I could go on and on – I wanted to share a possibly unnoticed and rare item on display. 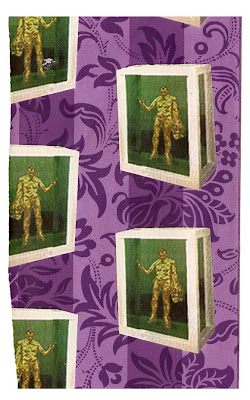 An original roll of wallpaper produced by Laura Ashley incorporating Bowie’s portrait of Lucien Freud was a surprise discovery. The limited edition boxed item of 500 was in aid of the War Child fashion event Pagan Fun Wear and featured in conjunction with the occasional series project Antennae #1, held at London’s Saatchi Gallery in St John’s Wood in 1995. The product is a brazen clashing of quintessential English country chintz from the house of Ashley with the equally brazen character that was Freud, which Bowie portrays in conceptually decorative unison within a Damien Hirst-esque formaldehyde tank in repeat. 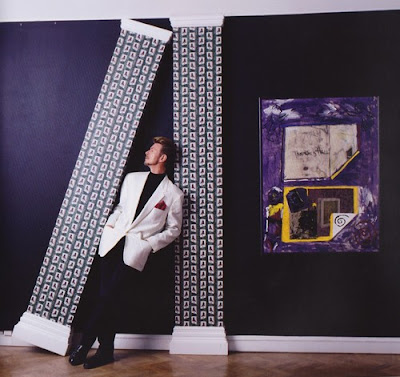 Buyers were provided with a conceptual instruction manual whereby they could recreate the excitement of the fashion event in the comfort of their own home, with various suggestions listed such as ‘Push several tables together to form your own catwalk’ and then ‘Dress up in the clothes you bought from the auction and walk up and down the catwalk’. The art-meets-product wallpaper later features in a photo shoot by Lord Snowdon from 2005 of Bowie striking a pose between two decorative columns that are plastered with the motif. While it may not be the most daring of expressions from Bowie's repertoire, the artwork is just as contemporary today as it was in its conception. The wallpaper and its creator are a timeless embodiment of gifted talent - we can all but hope there are more Golden Years to come.

David Bowie Is unmissable and it's not too late to experience this phenomenal exhibition. David Bowie Is closes this Sunday 11th August 2013 - visitors are advised to arrive early for limited ticket sales on the day. For further information visit V&A.

Posted by Jonathan Velardi at 03:28