The world’s Press have descended on London again to pitch up on very different turf from the sporting spectacle of twelve months ago. In a corner of West London, St Mary’s Hospital in Paddington has been home to international royal correspondents, news anchors and television crews for weeks, all eagerly awaiting the birth of Their Royal Highnesses The Duke and Duchess of Cambridge’s first child. Now days after media speculation the due date would be Saturday 13th July, newsrooms have surrendered to the waiting game, covering royal baby stories of both the absurd and sublime variety.


#RoyalBaby - It's Monday and a sunny start to the week. Still no sign of The Duchess let alone a baby pic.twitter.com/6pruWgkJ9O
— Dickie Arbiter (@RoyalDickie) July 15, 2013

From commemorative coins, chocolates and even cheese to a twenty-first century must-have: an app - affirming baby Cambridge as the most anticipated birth since the beginning of Twitter. The Royal Baby app, which intends to document various ‘firsts’ by the new addition to the House of Windsor in the coming months for dedicated royal followers who simply cannot wait for ‘commemorative’ publications to hit newsstands day-after-week-after-month. I myself could not resist getting involved in The Great Kate Wait and I had CNN’s Royal Correspondent Max Foster question Mario Testino whether he would be shooting the first official photograph of the royal trio, after spotting him at a charity function at Prince Charles's London residence, Clarence House last week - could Testino be keeping silencioso?

While the media scrum have created somewhat of an art installation in their own right out of stepladders and duct tape in a kaleidoscope of colours on the sidewalk opposite the hospital, within its very walls one will discover that even the art world is included in the royal baby furore. The sterilised operating spaces of a hospital are after all akin to the clean, white walls of a white cube and in the private maternity unit of the Lindo Wing - specialising in labour, delivery and postnatal care and where Princess Diana gave birth to Princes William and Harry in 1982 and 1984 respectively - the worlds of medicine and contemporary art come together in a unique installation created by British artist, Julian Opie. 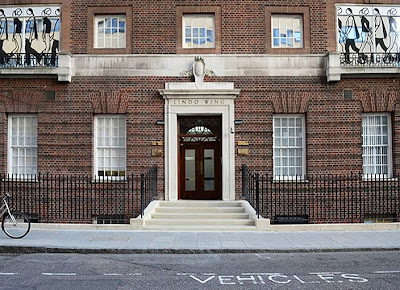 During its eighteenth-month renovation St Mary’s Hospital commissioned Opie to create forty panels of his trademark graphic portraits rendered with minimal detail, using thick, black lines for both the interior and exterior of the Lindo Wing, where the Duchess of Cambridge is due to give birth to the third in line to the throne. 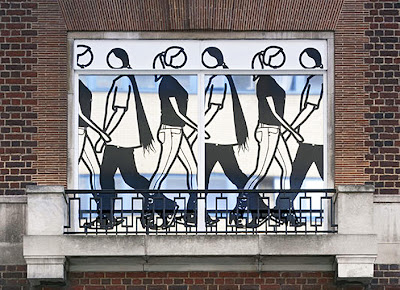 The permanent installation includes works of various sizes depicting tall, elegant women and crawling infants on transparent surfaces, light boxes and glass set against a neutral palette that feature along the walls of the wards, delivery rooms and building's façade. 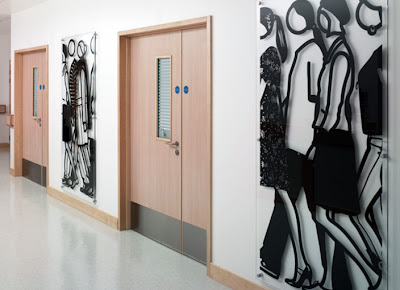 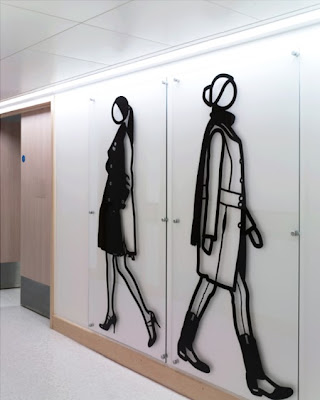 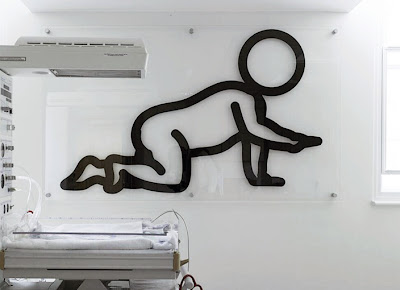 In an interview with The Telegraph, the artist talks of his intention to “enliven” patients with art that has a function to excite and the works certainly provide a special and alternative visual stimulus that is so very different from generic colour-conscious interior design, common on the bureaucratic agendas of public institutions. Given the Duchess is Patron of the capital's National Portrait Gallery she will appreciate the art around the unit and there is no doubt Opie will be amused that his work will be the first art seen by the future King or Queen of England. It would be wonderful if Their Royal Highnesses commissioned Opie to produce their newborn’s first official portrait in his contemporary style and save face amongst the art world with the rather disappointing choice of painter selected for the Duchess’s first official portrait unveiled earlier this year (A Portrait Of A Duchess, January 2013). 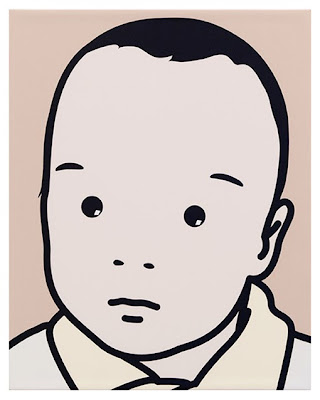 Paul, baby - 2001
My very best wishes to Their Royal Highnesses on their special delivery and as it so has been welcomed into this world, may their child be raised to reign supportive of arts, culture and creativity.

Visit Imperial College Healthcare NHS Trust for more information about the renovation to the Lindo Wing at St Mary’s Hospital.

Posted by Jonathan Velardi at 04:44