Wine collectors will already regard their cellars as a gallery of fine taste equal to any art collection, however collectors may want to keep Dom Pérignon’s 2003 Rosé Vintage above ground. The prestigious champagne house has invited Jeff Koons to produce a limited edition collaboration package that includes a scaled down version of his 2008 sculpture Balloon Venus, inspired by the ancient fertility statue Venus of Willendorf. The voluptuous vessel, exaggerated by Koons’s trademark inflatable aesthetic is anything but understated and the same can be said for its price tag – at $20,000 this is Dom Pérignon’s most expensive collaboration to date, after David Lynch, Andy Warhol (A Toast To Pop, July 2010), Karl Lagerfeld and Marc Newson. The iconic bottle’s label and foiling mirrors that of its presentation box in metallic majenta – a nod to its rosé interior. 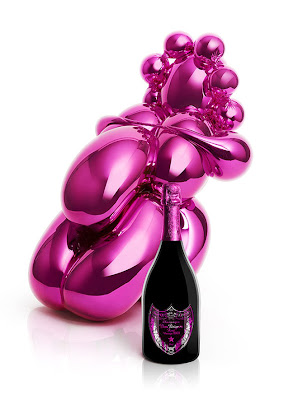 Balloon Venus, Dom Pérignon 2003 Rosé Vintage
This is not of course Koons’s first foray into the cellar – in 2010 Baroness Philippine de Rothschild continued the annual tradition since 1945 at the winery of Baron Philippe de Rothschild to commission an artist to design the label for its Château Mouton Rothschild bottles. Koons joined Picasso, Dali, Freud, Bacon and Warhol in this exclusive club with a reworking of the classical fresco image from Pompeii of yet another Venus - the House of the Venus Marina III - superimposed with an infantile silver line drawing of a sun and sailing boat. Château Mouton Rothschild 2010 remains one of the most expensive of the Moutons from the winery’s vintage from Pauillac over the last decade and is sought after by wine and art connoisseurs alike. 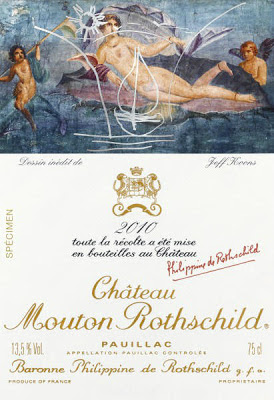 This latest luxury association with an art world grandee is somewhat of a first with regards to its price bracket, inevitably posing the question: is Dom Pérignon’s 2003 Rosé Vintage the most expensive champagne in one’s cellar or is Balloon Venus the most accessible Jeff Koons one can collect? Whatever camp it lies, Dom Pérignon affirms the high-culture-formula to be much more than a trend in recent years but an essential staple in a brand’s heritage and a profitable identity strategy that justifies larger than life price tags, and in this instance, larger than life lifestyles. For when money is no object, why not have one Balloon Venus in the cellar and the other on display upstairs. Chin-chin to the best of both worlds.

To find out more about Koons’s luxury lifestyle collaborations from this year read Fine Dining - a commission by French porcelain manufacturer Bernardaud to celebrate their 150th Anniversary with a collection of plates for L’Art de la Table.

Posted by Jonathan Velardi at 03:35