The annual Summer Opening of Buckingham Palace had an extra special plug before its official opening today - albeit indirectly - when Her Majesty The Queen disclosed to well wishers in Cumbria that she wished The Duke and Duchess of Cambridge’s imminent baby would arrive sooner rather than later as she was ‘going on holidays’. Prince George knew not to upset granny and arrived just in time to see her off before taking residence at Balmoral Castle in Scotland until the Autumn. When The Queen is away, the Royal Collection Trust opens the gates of the palace for visitors to explore inside one of London’s most famous landmarks and discover the wealth of fine art and objets d’art that make up this priceless, national collection. In what had been an extraordinary week for the House of Windsor in securing the line of succession for this century on the birth of His Royal Highness Prince George of Cambridge (Special Delivery: It's A Prince, July 2013), it was a pleasure to be invited to the scene of global interest on an unprecedented scale only a few days before, to attend the Press View of the palace’s State Apartments and exhibit before its public opening. 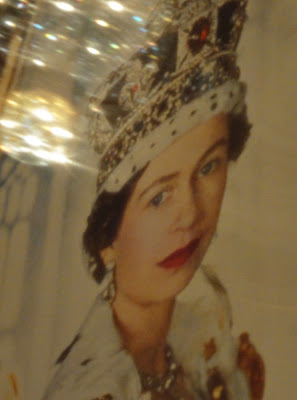 In 1953 London set the stage of pomp and pageantry that the world is so accustom with today. The Queen’s Coronation was the first major international event broadcast by the BBC on television and captured the atmosphere and regalia of a State occasion that remained essentially unchanged in British history for a thousand years. It made for potent viewing and set precedence for ceremonial documentation that too has changed very little with the planning of such events in the twenty-first century. The Summer Opening of Buckingham Palace celebrates the sixtieth anniversary of this historic event with the dedicated exhibition, The Queen’s Coronation 1953 that reunites art, fashion, jewellery and objects from the Coronation Day on 2nd June to recreate both the dazzling drama as well as the important sense of duty that had been bestowed on a young Princess Elizabeth. 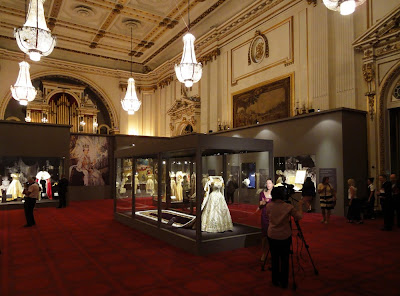 Caroline de Guitat - Royal Collection Curator in The Ballroom
While many will have seen footage from the day countless times before, this year’s exhibit successfully complements the State Apartments as more than just rooms labelled for ‘official occasions’. Walking through the gilded interiors remastered by the architect John Nash under George IV, that very same footage comes to life as one stands in The Throne Room watching private scenes of a rather disorganised royal family trying to arrange themselves into frame for the photographer Cecil Beaton. One can only imagine the roar of cheers from the crowds that swamped the Mall, trapped in the palace's quadrangle that would have resonated from room to room as The Queen and her family prepared to celebrate over a State Banquet after returning from Westminster Abbey where the investiture took place.

Visitors are welcomed into the exhibition space along the tour of the State Apartments by a marvellous contemporary visual installation in the Ball Supper Room of news footage - with the audio of a bygone reporting style in received pronunciation - in the run up to the Coronation, which is brilliantly displayed to project within the flat recesses of the ornate panelling and cornicing that decorate the walls of the room. A sculptural collection of wooden television sets from the Fifties show news items of families gripped with national pride, as well as the sheer excitement of television itself, with sets purchased for the very first time especially for the event.

The black and white images that had been captured by Marconi MK II film cameras is in stark contrast to the glittering technicolour display, curated by Caroline de Guitat, of the royal and ceremonial costume, jewellery and personal items that are presented in the adjoining Ballroom. Here are a few highlights from my visit: 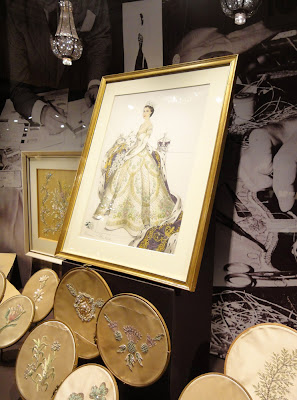 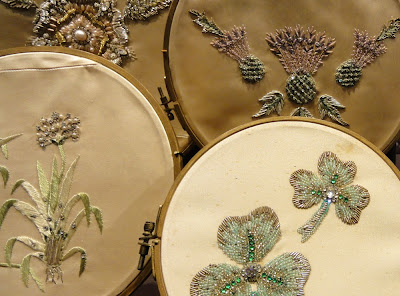 Encrusted floral symbols of the four countries of the United Kingdom 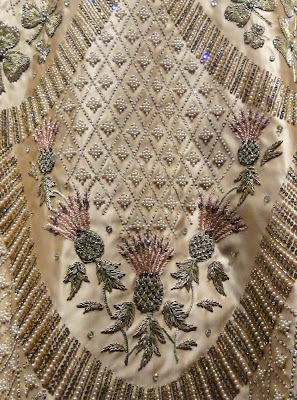 Fashion enthusiasts will admire the beautiful iconographic designs by British couturier Norman Hartnall, who worked national and commonwealth floral emblems into the embroidery design of The Queen's white satin Coronation Dress - a breathtaking installation of minute detail on display for the very first time since 1953. The Robe of Estate - six and half metres of purple silk-velvet, lined with ermine - made my Ede and Ravenscroft, incorporates imagery of peace and prosperity in the form of raised wheat ears and olive branches along the edge of the train and frames the Monarch's new cipher, executed in fine gold thread by the Royal School of Needlework over four laborious months. Hartnall's sketches and test hoops from the school neighbour the completed garment in all its glory as the centrepiece in the exhibition space. 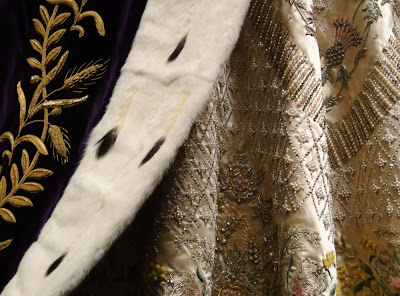 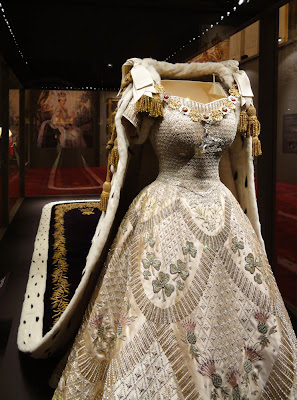 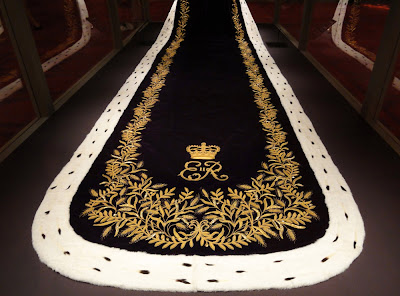 Putting on a show is nothing without diamonds and the iconic Diamond Diadem from 1820 by Rundell, Bridge and Rundell is paired with a necklace and earrings by R & S Garrard & Co. - masterpieces that are quite simply brilliant in name and vision. 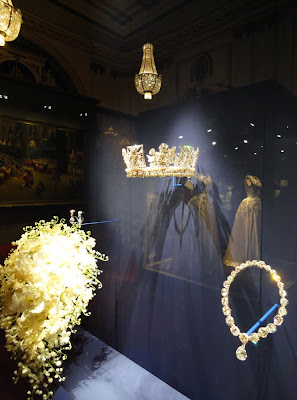 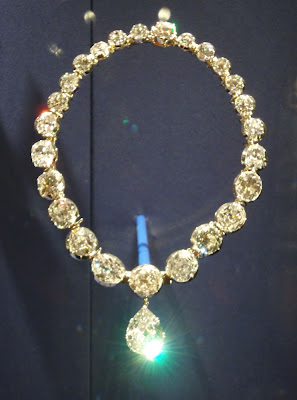 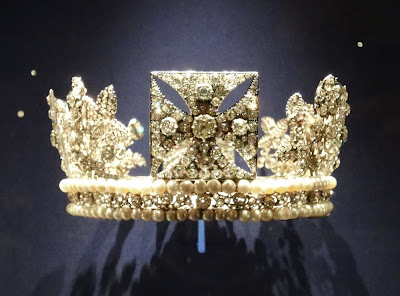 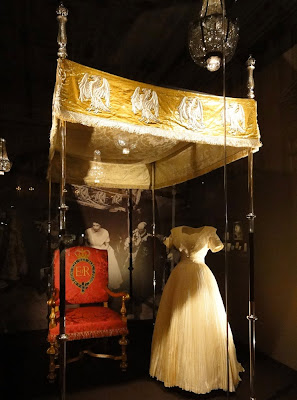 The Throne Chair and Anointing Dress 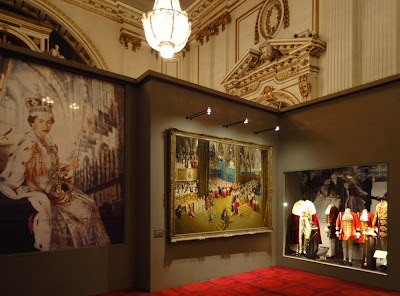 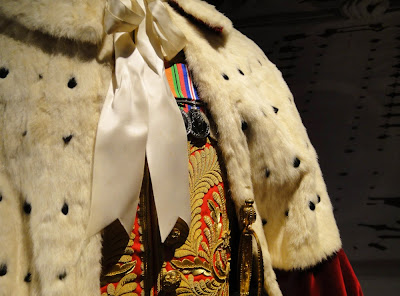 The Earl Marshal's Robe
Preliminary works in watercolour on paper by the Polish-born British expressionist painter Feliks Topolski capture the energy of the spectacle, as well as the distinction between the young Queen and her fellow, more mature subjects adorned in their weighty attire. The Duke of Edinburgh commissioned Topolski to record the occasion in a large-scale canvas composition, Coronation Frieze, completed in the artist’s fluid style in 1960 that is on display at the very beginning of the tour. Illustrators will appreciate the charming invitation personally created for a young Prince Charles to attend the Coronation by Joan Hassall that reminds visitors of both the importance of provenance and preservation – ephemera is not a word in the Royal Collection’s lexicon. 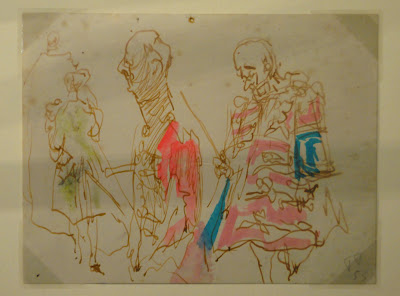 In the Abbey - Coronation 1953 - Feliks Topolski 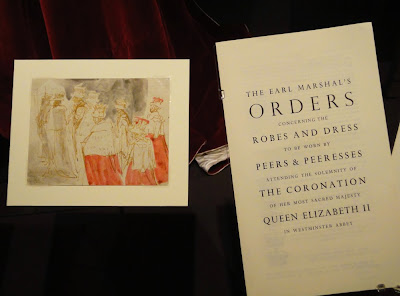 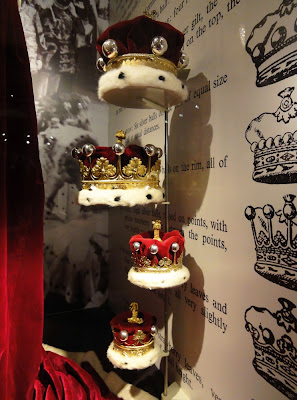 Coronets of Peers and Peeresses 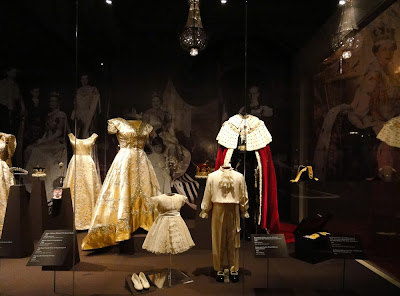 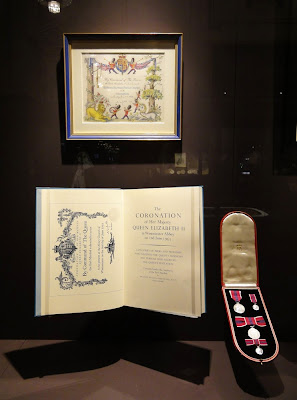 The Ballroom and subsequent State Dining Room - exquisitely dressed as it would have been for the Coronation Banquet on Sèvres and silver-gilt service - display a rich chapter in British history and presents the beginnings of a global understanding of the symbolism of Monarchy in the twentieth-century. Curatorially loaded yet also restrained, given the vastness of the Royal Collection’s archives, the exhibition effectively balances the familiar with the impeccable detail of the new and unseen: a fine-tuned formula that will no doubt continue to contribute to the allure of such a unique spectacle that is a Coronation, guaranteed to be performed by the House of Windsor for future generations to come.

The Queen’s Coronation 1953 is part of a visit to the Summer Opening of the State Rooms at Buckingham Palace that includes access to the royal garden until 29th September 2013. The Royal Mews and The Queen’s Gallery also offer exhibits during this period – for further details about events, educational programmes and ticket information visit the Royal Collection's official website.

Posted by Jonathan Velardi at 15:55