A Lot Of Possibilities: North Adams

It's been a while since I've posted anything about A Lot of Possibilities - many of you will remember the project created by artist and friend, Anna Lise Jensen, and my contribution since its launch in 2009 when I was living in New York City. Over the last two years Anna Lise has encouraged dialogue between contemporary artists and gardeners of the West 104th Street Community Garden on the Upper West Side as well as city officials in order to bridge private and public spaces around the Manhattan Valley. My contribution to the growing collective is Flamingo Parade, a digital illustration repeat pattern that was awarded funding from the Lower Manhattan Cultural Council in 2010 to be printed onto a 31 x 9ft vinyl banner for public installation. Towards the middle of last year I followed up the work in animated form that highlighted my journey of the elements in the West 104th Street Community Garden to produce a graphic narrative in motion. 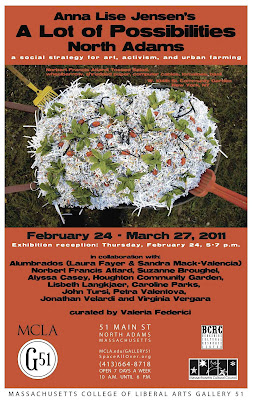 It gives me great pleasure therefore to announce the launch of A Lot of Possibilities: North Adams, an exhibition in North Adams, Massachusetts curated by Valeria Federici. The exhibition at MCLA Gallery 51 brings together the diverse range of creative input from a selection of artists who have worked on the project and were brought together by Anna Lise - I am very excited to have Flamingo Parade installed in all its grand scale in the space and it is a great achievement to have all the works together in a retrospective of what has been an exciting and ever growing concern of art and the wider audience. Check back at jonathanvelardi.blogspot.com for more updates and hopefully images from across the pond from the exhibition that will open with a Private View this Thursday the 24th February and will run until the 27th March. Visit MCLA Gallery 51 for further information about the exhibition and find below my own personal statement of how the project was conceived, my involvement with A Lot of Possibilities and the future ofFlamingo Parade. 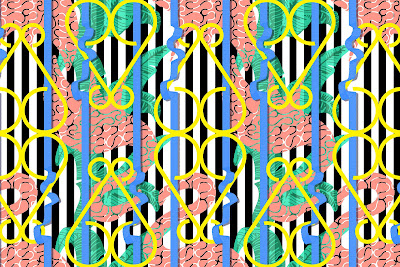 "In January 2009 I was invited by Anna Lise Jensen to take residence at Winter Space, West 103rd Street, Manhattan, New York. It is here where I began to involve myself in the community garden project, ‘A Lot of Possibilities’, as both an outsider amongst the gardeners as well as a foreigner in New York City. The view from my studio looked down onto the community garden of West 104th Street – it would greet me in the morning and it would be the last thing I saw at night. I am interested in public spaces within urban environments and I wanted to explore the notion of ‘green space’ and its fast-extinction on the island of Manhattan. I may have only been a ten-minute walk away from Central Park, but I was more interested in the pockets of community space that I came across while I explored the neighbourhoods on my travels across the city.

The winter season may not have shown the gardens in their best light, but what the freezing temperatures did expose were the aspects of human intervention, such as bamboo supports, trellises and personal decorations that portrayed the importance of the space as a place where gardeners could call it their own. I decided to contribute to the project with a work that was to be wall-based. I noticed that many community gardens were located between high-rise buildings on all sides and an element of height was needed. I noticed that although identity played an important role in community gardens – of which West 104th Street had in abundance – there was a familiar with all the gardens I visited: the use of wire fencing around the perimeter of the space. While in America thousands of miles of wire fencing is used to line sports fields, school grounds, parking lots and prison yards, in England, use of wire fencing is restricted to industrial use and protection. I found this cultural difference an interesting idea to explore, since I would also look at the garden from my studio window through a myriad of metal in the shape of wrought iron bars that also masked many other windows and doors around the city. I wanted to play with this notion of community and security - the idea that the garden was for the community while at the same time it needed to protect itself. I thought this was a poignant parallel with the continuous threat of destruction from property development in Manhattan. Irony in the form of the plastic, pink flamingoes that lined the entrance to the West 104th Street community garden were subjects I wanted to incorporate in my design to add an element of the community’s personality. I many not have noticed them had it been another season, but their tropical potency stood out while their heads poked out of the foot-high snowfall. After two drafts and discussions with the West 104th Street community gardeners, my final design for Flamingo Parade was completed in early 2010. It was awarded funding by the Lower Manhattan Cultural Council in the same year to be printed onto a 31 x 9ft vinyl banner. After the exhibition, Flamingo Parade is scheduled for installation within the garden, where it was inspired, in 2011."

Posted by Jonathan Velardi at 12:57