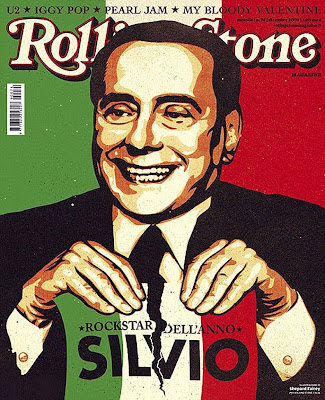 The Italian Prime Minister, Silvio Berlusconi, has fallen short of any accolades this year as a result of a tirade of scandals - from accusations of adultery to luxury gifts and parties that have been showered on a group of young aspiring models, known as veline. But while visiting the Middle East, the media mogul-turned-politican will probably believe the turbulence of the passing months was all worth it when he returns to Italy to find he has been named 'rock star of the year' by Rolling Stone Italia magazine. This rock and roll lifestyle award, usually honouring the kings and queens of rock, celebrates a not too dissimilar dolce vita between previously honoured rock legends with Berlusconi's private jets, island villas, Roman palazzos and a few sex-scandals thrown in for good measure.

Shepard Fairey designed the cover to produce a rather ironic take on Italy' s future under the control of the crass ageing billionaire. Famed for his HOPE campaign posters in support of Barack Obama, a very different cover story is being told here. Italy's lack of progression and backward political structure that is evident on the international stage sits hand in hand with Berlusconi's label as a divider rather than a unifier - as he tears the tricolore flag and dons a pair of Fairey-trademark skull cufflinks. Facing trials of bribery, tax fraud and marital divorce, he is more 'circus clown' than 'rock royalty' at the expense of Italy's reputation, it could be the grassroots of his success as a media emperor that may see his downfall with the publication - Gradisca, Presidente (Take Your Pleasure Prime Minister) - the memoirs of velina, Patrizia D'Addario that will leave a bitter, rather than sweet, taste of life for Mr. Berlusconi.
Posted by Jonathan Velardi at 03:44