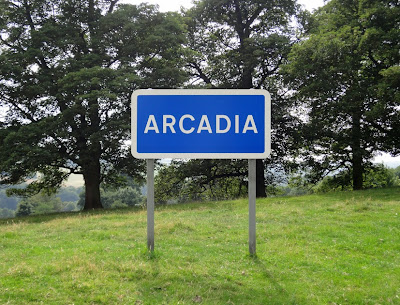 Arcadia - Leo Fitzmaurice
Last month I visited the enchanting estate of Bretton Hall, home to Yorkshire Sculpture Park. A short drive from neighbouring art hub The Hepworth Wakefield (Sound And Vision, September 2013), the open-air gallery is set amongst the undulating verdant Wakefield landscape and has been showcasing large-scale works by national and international artists through a changing exhibition programme since 1977. 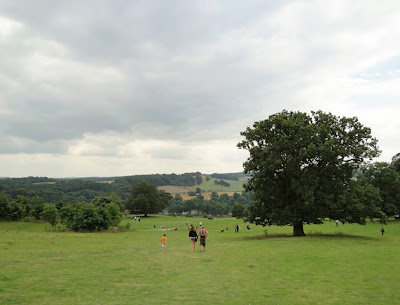 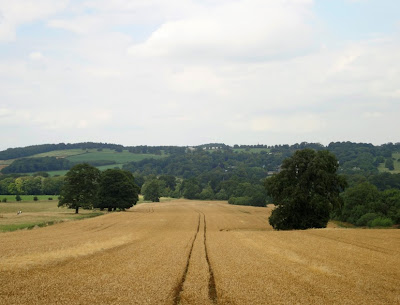 I was determined to make a northbound pilgrimage up the M1 to the much lauded and largest exhibition of work to date by Yinka Shonibare, MBE, before its end this month. 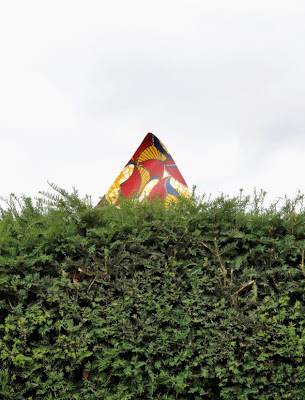 FABRIC-ATION features the wild mixed media practice from the British Nigerian artist’s career over the past decade as well as two major commissions entitled Wind Sculpture, which breathe a new direction for Shonibare and premiere in the Park’s formal landscape. 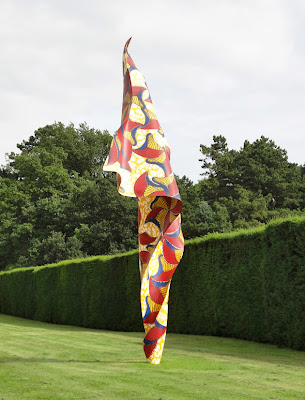 Wind Sculpture - Yinka Shonibare, MBE
Exploring themes of identity, stereotype and African-ness within the context of a superficial multicultural age, the artist’s witty playfulness spans from the patterns that adorn his now-signature use of Dutch Wax textiles to wordplays of titles, through to the metaphors of objects that are found in his divinely decapitated tableaux. In the interior gallery space, conceptually loaded works bridge the resurgence of protest that defined 2011 (HOPE Less, December 2011) – golden guns and Blackberry handsets make reference to the murdered Libyan dictator Colonel Gaddafi and the London riots respectively – they are held in the adolescent hands of a new body of work, Revolution Kids that comprise of hybrid taxidermy figures. 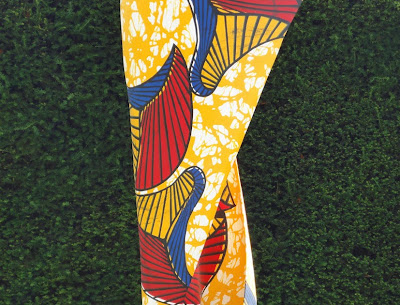 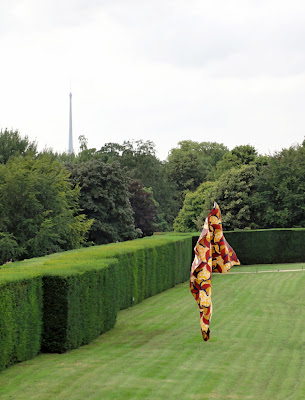 The distant high rise of the Emley Moor broadcasting tower 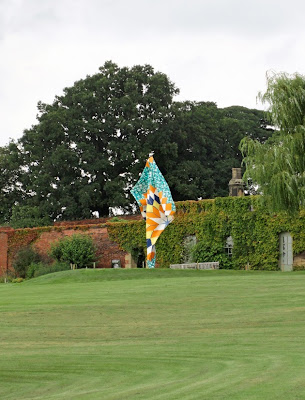 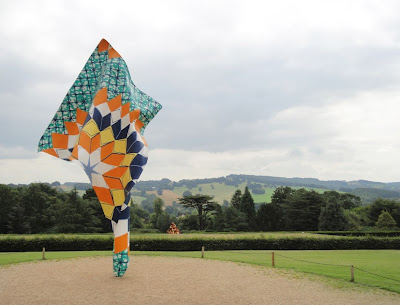 While this series pays homage to the tumultuous year that was 2011, the course of history will project an additional facet onto these artefacts: with continuing unrest in the Middle East and clandestine abuse across social media amongst youth culture, Revolution Kids may be the firstborn of a generation of works to come. 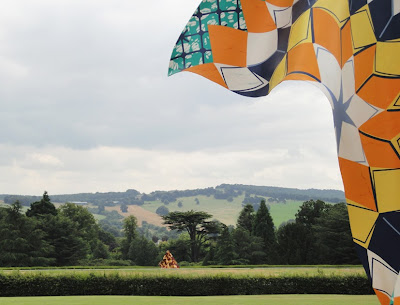 The two outdoor sculptures are sumptuous in scale as well as substance in their setting and it is impossible not to make references to the aesthetics of luxury and money that is produced by these gravity-defying plumes of textile print.
In as much are the number of undergarments that are meticulously created to costume Shonibare’s Victorian subjects of which he is most known, the layer upon layer of narrative that the works on display in the exhibition posses are magnetic and will have both the dandy and academic drawn into the ruffles of resonance that is uniquely Yinka Shonibare, MBE.

Over the years I have been very fortunate to visit some of the most beautiful public and private outdoor art collections in the world and Yorkshire Sculpture Park effortlessly makes the cut. As Leo Fitzmaurice's art-cum-road sign suggests on entry to the Park, I had arrived in Arcadia. Visitors may explore the manicured sanctuaries that are the surrounding areas of Bretton Hall where works by Hans Josephsohn, Barbara Hepworth, Jonathan Borofsky and Roger Hiorns with his celebrated Seizure installation, all take residence. 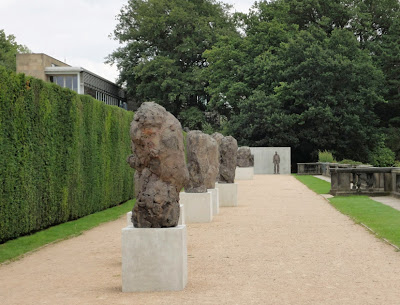 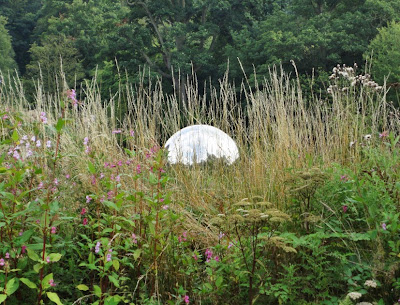 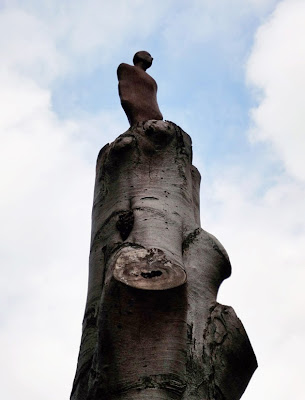 Antony Gormley
Ramblers may venture into the five hundred acre countryside to discover iconic installations by Antony Gormley, Andy Goldsworthy, Henry Moore and David Nash to name but a few. 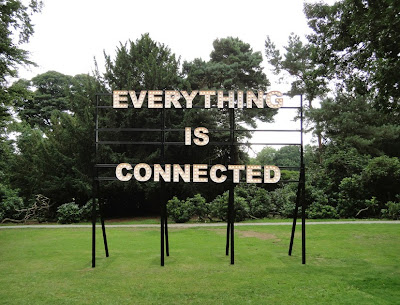 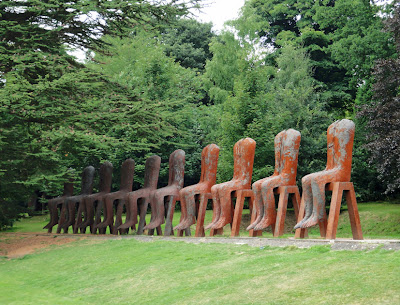 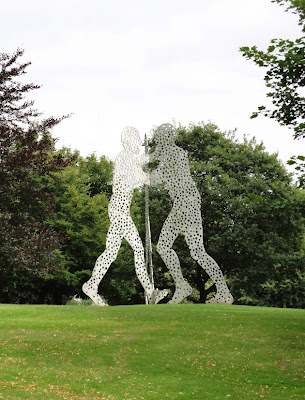 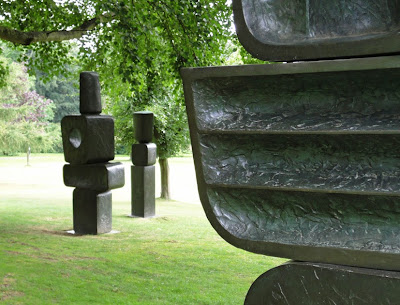 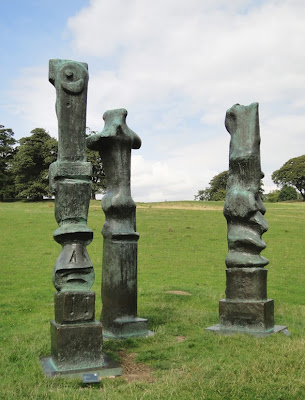 Henry Moore
Located two kilometres directly opposite the Park's main exhibition centre, The Longside Gallery is a contemporary outpost for both Yorkshire Sculpture Park and the Arts Council Collection. It is also as close to white cube as one will get when the stunning panorama spans a field of grazing cows and is worth the walk, or shuttle bus, to view the space. Currently on show are works by collaborative partnership Lucy + Jorge Orta concerned with global sustainability.

If you missed FABRIC-ATION visit Yorkshire Sculpture Park for a synopsis of the exhibition. London's Royal Museums Greenwich will play host to Shonibare's indoor and outdoor artworks during its Winter programme - Yinka Shonibare, MBE at Greenwich will be on display across several sites in the maritime museum's network of exhibition spaces from 18th September 2013 - 14th February 2014.

Visit jonathanvelardi.com/writing for more on art, culture and lifestyle

Posted by Jonathan Velardi at 14:16