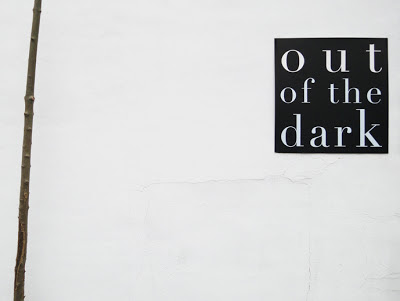 Winter may have decided to overstay its welcome, however in a corner of High Wycombe in Buckinghamshire, a furniture showroom is in full bloom, bursting with kaleidoscopic colour. Last weekend I travelled to the market town that was once the chair making capital of the world and epicentre of British furniture making throughout the nineteenth-century to visit Out of the Dark, a charitable social enterprise that recycles, restores and redecorates salvaged furniture. 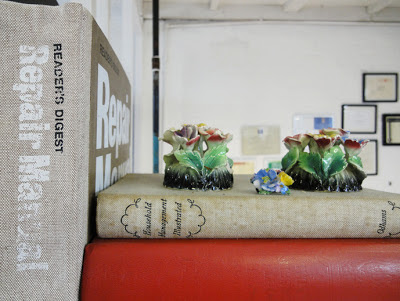 Founded by Jay and Jade Blades in 2010 as an extension to their already successful charitable programme Street Dreams, Out of the Dark is a practical resource for disadvantaged and disengaged young people in the local community to engage with skills training and business within a creative environment. I had discovered the enterprise on Twitter last year and after following their work online I was very excited to finally see it with my own eyes. 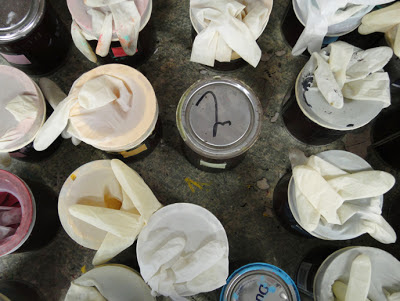 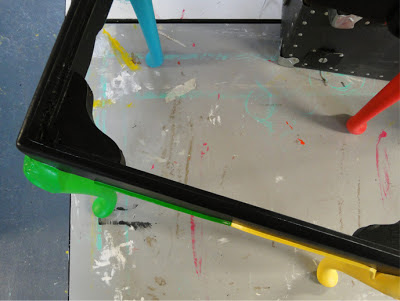 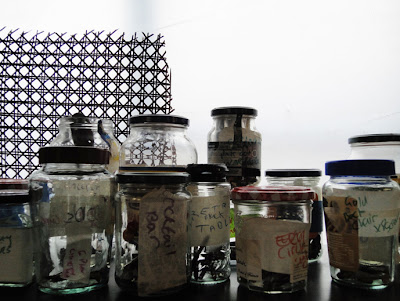 Few traces of High Wycombe’s furniture past exist today with only a handful of workshops still in production on the Abercromby Works industrial estate where Out of the Dark is based. In contrast to their dark wood counterparts, the bright white showroom at Out of the Dark HQ stages a euphoric collection of mid-century pieces - from Avalon, Mackintosh and Bucks-based firms Ercol, G-Plan and Parker Knoll – that have been either donated or salvaged. 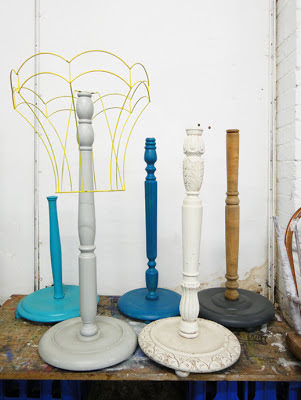 Colour-comrades will be in their element amongst the colour blocking aesthetic the enterprise has adopted in a zany Georgian palette of duck egg blue and arsenic green paired with canary yellow and fuchsia that accent as well as readdress the craft of forgotten furniture in an unashamed era of finite flat packs. For one-off warriors, the only duplicates you will find here are furniture sets and even then, legs of chairs or tables will be given their individual stroke of colour. My personal favourites were candelabras made from wooden lamp stands, ideal for eco-friendly romantics, and when clustered together make quite the grand statement. 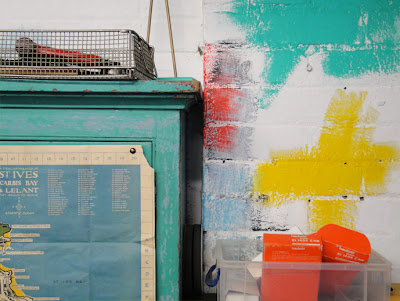 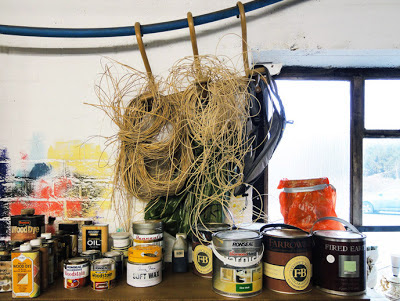 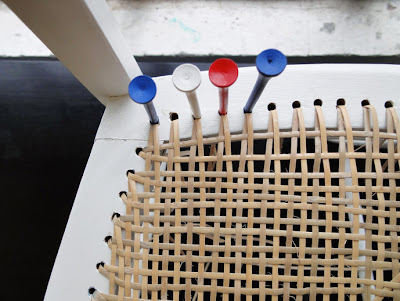 In the equally colourful workshop below, Jay kindly gave me a tour of the different workstations where his young apprentices learn and master a range of skills from wood planing to Danish cord weaving and even caning; the lost art of rattan vine decoration which is currently being taught by a ninety-one-year-old local caner. Dashing from wall to wall to show me the library of books and how-to manuals it was clear to see from Jay’s own enthusiasm why the current group of young people, aged between fourteen to eighteen-years-old, are so actively involved in something which they do in their free time between school or being out on the streets. He continued to explain why colour blocking was favoured above more on-trend styles such as vintage or shabby chic; the latter being easily achieved with a lick of paint and a lacklustre sand down, while the former demands commitment and crisp execution – sanding, stripping then multiple coats of paint followed by several layers of varnish – to produce the smooth finish of concentrated colour.
On a psychological level this process encourages confidence and commands respect; the respect the piece of furniture as commodity deserves by the apprentice as well as the respect earned by the apprentice through achievement. Working on three to four pieces at a time, they will see each piece through from beginning to end and witness its journey upstairs in the showroom to when it is bought and taken away to a new home. I don’t know any better feeling of satisfaction than that. 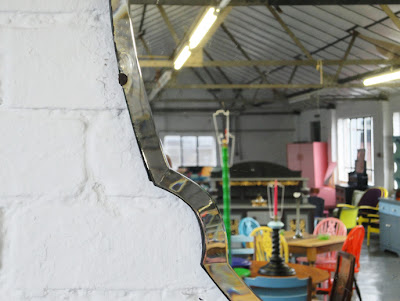 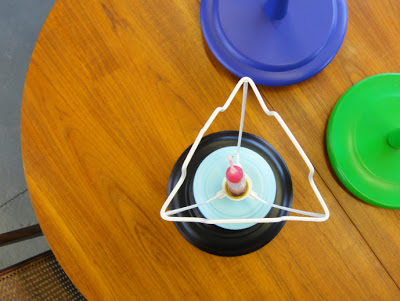 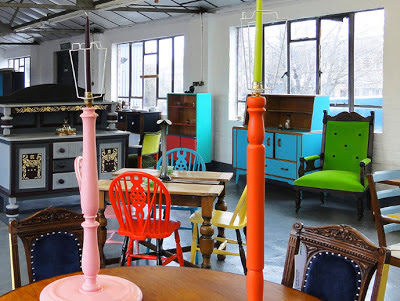 Emily, one of the more experienced young people, was not alien to satisfaction. The G-Plan chest of drawers she was currently working on was one in a long line of memorable achievements she modestly described. Having worked at Out of the Dark since she was fourteen-years-old, Emily explained how she had known nothing about furniture before and now finds herself giving once-overs to friends’ living rooms. Considering a career as a tattoo artist, Emily is a testament to Out of the Dark’s disciplinary formula that subsequently fosters new directions for the enterprise to explore. She recently launched an initiative to incorporate hand-drawn elements inspired by her interest in tattoo art on the furniture and invited other female graffiti artists to work on panels on larger pieces to create both unique and functional works of art. 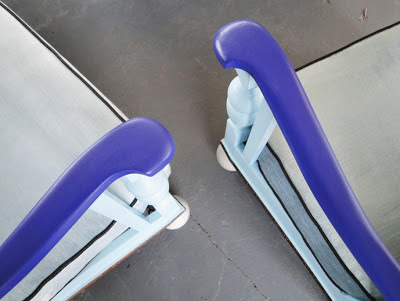 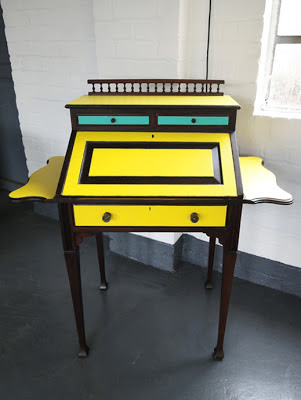 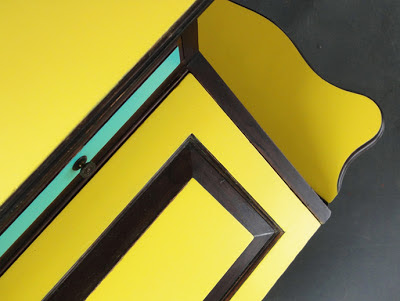 It was a pleasure meeting Emily, Jay, Jade and everyone at Out of the Dark over the weekend. Exploring the workshop brought me back to my art school days and the invincibility of knowing when you have a good thing going - only, I was much less confident with colour. Riding the waves of upcycling and sustainability as well as the resurgence of personal expression in the home that was documented by celebrated British artist Grayson Perry last year (The Grayson Perry Effect, July 2012), Out of the Dark not only appeals to young design-conscious customers but also to those who remember these classic pieces from conception. A group from the Women’s Institute in Bourne End who preceded my visit exemplified this very concept of nostalgic clientele who have not lost their desire for personality in their home amid a commercial market that offers very little to discerning seniors other than mahogany and magnolia. 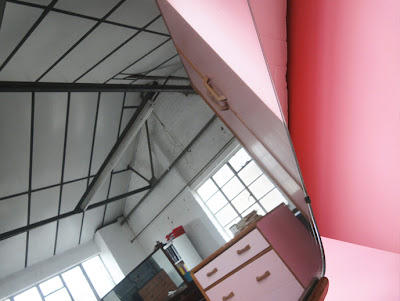 While it may not be to the taste of design purists, with several private commissions in the workshop awaiting only restoration, makeovers are not the only thing the enterprise is about. In as much as Jay and Jade nurture the inner and outer confidence of young people who don an overall with growing pride and give new life to design classics, Out of the Dark entices customers to rediscover their confidence and potential for minor or major doses of eccentricity within the four walls of their own home through colour, style or a spruce up, and all for a great cause.
Ever in demand from exhibiting fairs nationwide to the pages of The Financial Times How To Spend It luxury supplement magazine, it seems this kind of confidence is contagious. 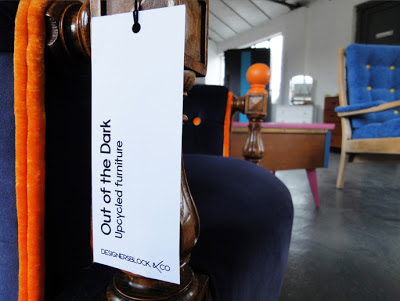 Londoners can find the Out of the Dark team running a workshop during Fabrications London later this month and in the West County, at the exhibition Furniture as Art in Bath between 25th April - 4th May.

The showroom is open to the public on Fridays and Saturdays 10am - 5pm or by appointment – visit Out of the Dark for contact details and pricing.