2013 is set to be yet another year of British accolade. Drum roll please, or should that be synthesizer, for breaking news about a certain Mr David Robert Jones - or David Bowie for non-Ziggy-super fans - who has released a new single today, on his sixty-sixth birthday.
Where We Are Now? is the first track ahead of a brand new album, The Next Day, scheduled for release in March. It has been ten long years since the Starman's last album and his reclusive nature, away from both public glare and stage, only fuels the anticipation and suspense of a pending new body of work and hopeful tour dates. Having turned down an invitation to perform in person at the London 2012 Olympic ceremonies, with only a few audio tracks to be contented with amidst the best of British fanfare (The Finish Line, 2012),  glam-rockers can look forward to a celebration of the iconic artist's contribution to art, fashion, film and music at the exhibition, David Bowie is at The Victoria and Albert Museum which will open in March and coincide with the album launch. The first international retrospective of its kind with unprecedented access to the David Bowie Archive will incorporate over three-hundred objects - from handwritten lyrics to original costumes and set designs to his very own instruments - charting Bowie's sustained reinvention across five decades.
Collaboration will be one of the themes explored in the exhibition and if today's music video is anything to go by, we can expect Bowie will be back with a bang and on the money with continued interest in contemporary art association and the prospect of a digital renaissance across social media for twenty-first century digital addicts. The Where We Are Now? music video is directed by international multimedia artist, Tony Oursler and features his trademark animated projections onto handmade sculptural figures. 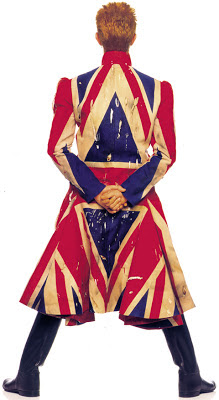 So here's to a new year and the return of the original new.
Happy Birthday Mr Bowie!

Find out more about the forthcoming exhibition David Bowie is 23rd March - 28th July at The Victoria and Albert Museum, London here.

Image courtesy of Victoria and Albert Museum
Posted by Jonathan Velardi at 03:56