A Portrait Of A Duchess 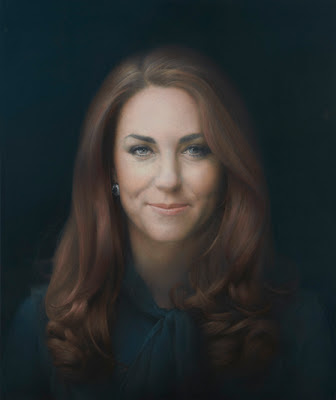 HRH The Duchess of Cambridge, 2013 - oil on canvas by Paul Emsley
It was the morning after the media furore as I walked up St Martin's Place to the scene of much debate and criticism. While the press pack had come and gone only the day before, my Twitter feed on Saturday morning continued to show virtual commentary on the Royal state of affairs that was the first official painted portrait of Her Royal Highness The Duchess of Cambridge. “It’s just amazing…” said The Duchess to Paul Emsley, the award-winning Scottish painter who took brush to canvas for the Royal commission by the National Portrait Gallery, of which The Duchess is Patron.

With less than twenty-four hours since its official unveiling, it was a surprisingly quiet Saturday morning in Room 36 with only a handful of visitors standing face to face with the larger than life profile. Kate shares the space with the neo expressionist style of Paula Rego portraying Germaine Greer, the awkward repose of Thomas Adès by Phil Hale; John Keane’s bright strokes of Mo Mowlam and the requisite Royal military presence in neighbour, Lance Corporal Beharry from the Prince of Wales Regiment, in the illustrative style of Emma Wesley. The darkest canvas of them all, Emsley’s style of restrained oil application and glazing is in contrast to the liberal and fluid gestures that surround it. ‘The singularity and silence of form’ is how the artist describes his use of dark backgrounds – pair this with a limited colour palette of blues and greys, the result is certainly silent and perhaps misjudged for a young subject who only turned thirty this very week. Light, an element Emsley has gained recognition in capturing with his photorealist BP Portrait Award in 2007, has refracted into an unattractive haze that has unfortunately gifted her both unnecessary age and formality. Closing in on the canvas equally disappoints – no revelations are unearthed and the rather mottled skin tones that have had blue tones picked out from other areas in a hopeful attempt at depth, fall quite literally flat on The Duchess’s face. With only two sittings and a series of photographs taken by the artist himself, in a press release published by St James's Palace Emsley explains how Kate wished to be portrayed 'naturally' as opposed to her 'official self'. How then naturally translated into soft focus is a curiosity, however the amount of detail that has been dedicated to her hair and cascading locks – a feature that is globally scrutinized and which the artist surprisingly stresses its importance as being 'strong' and 'recognisable' in a trailer for the National Portrait Gallery (below) - has been executed with such staging and minute attention through a spectrum of grey and luminous copper hues; detail that has been starved from anywhere else across the visage. I found myself transfixed on the unusually defined right eyebrow that somehow escaped this soft focus – a distraction that would have been welcomed in the eyes that suffer from icy up lighting. And so to the mouth: does Emsley's notification that it turned from unsmiling to smiling contribute any more or less to my understanding? He only confirms Kate is in fact smiling, albeit enigmatically. In the words of my esteemed friend and artist Ana Cavic, is she the Mona Lisa?, a question that may be on the lips of art historians forevermore.

It is however not entirely off with his head for Emsley. While he is the executioner, he is not alone for critical execution. It is reported that Kate was involved with choosing Emsley with the help of National Portrait Gallery Director, Sandy Nairne. Include the countless correspondence between palace and institution it would have been undoubtedly a daunting prospect for the new Royal. Yet given the strong signals that both Kate and her husband, Prince William have worked hard at expressing - that of a young, informal, changing face of the House of Windsor - the definitively conservative choice in artist and image is frustrating. The Sloane Ranger returneth is a message that instantly came to mind as I viewed the portrait, exposing another misjudgment on the part of Kate’s Royal advisors, or lack of if reports are to be believed. The Duchess’s choice of a navy blue pussybow blouse, made famous by former Prime Minister, Margaret Thatcher, teamed with heirloom earrings, present not only a potentially loaded composition but a stiff and detached icon of twenty-first century Britain through in an irrelevant Eighties filter. Also to be noted are the blouse’s sleeves that expose a possible amendment from their sleeveless state in the artist’s original photographs, which on canvas display very little effort to unify blouse with sleeve. If Austerity Duchess were the intentions du jour of Kate and company then this equally falls flat with delusion. Emsley and the club of traditional portrait artists command far greater amounts for this formal style of work than an emerging contemporary talent, which in my opinion would have been a far suitable choice - if not only for style, but also for substance. A graduate from London’s many fine art schools such as The Royal Academy or The Slade School of Fine Art, of which aspiring artists from around the world fight for student places, would have been a refreshing and powerful statement against the inevitability of Royal protocol.

What hangs in Room 36 is a portrait engulfed in safety and unexpected dullness of one of the most photographed women in the world. It is a pity an artist, who may have delved into allegorical integration or played with personality through colour or set design, was not elected. As for the choice of frame – a very plain silver number – unsurprisingly has invited damning comparisons to portraits that may be found in establishments on the British high street: a first in the comparison archives for Royal portraiture to date.

Emsley will now have to accept his portrait of The Duchess of Cambridge will eclipse his more celebrated works. For Kate, an alumnus of history of art, her first painted portrait now joins its very timeline and with Prince William, their duty as future King and Queen will consist of a whole life ahead of them with portraits and various immortalizations in the name of State and institution. In her early years as a new member of the Royal Family and a time that precedes the imminent birth of her first child, she may have wanted to be reminded of this special occasion in a different light in years to come: when she really is old and grey.