The Devil's in the Detail 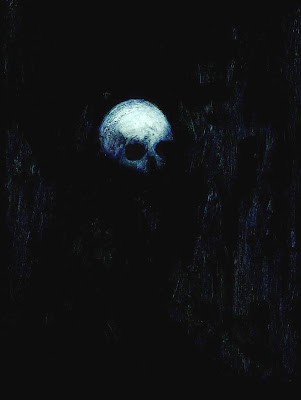 Had gallery etiquette turned over a new leaf? I asked myself. The arrogance that normally exudes from delusional art school students who work in contemporary galleries was absent in the air. The answer: I was in The Wallace Collection. Far from Hoxton Square and not too far from the scene in Mayfair, The Wallace Collection houses one of the world's finest collections of fine and decorative arts from the fifteenth to the nineteenth century that include an array of Old Master paintings and it is here that another of the world's finest - and prolific - subjects was to collide with this institution. Damien Hirst rediscovered the paint brush between 2006 and 2008 to produce 25 new paintings for the exhibition, No Love Lost, Blue Paintings.

The exhibition has caused much media attention not only in regards to the 'bold' new direction of Hirst's work but his personal choice to exhibit in such a classical environment au fait with the traditional European style that neighbours the dark, deathly, Bacon-inspired works. The stewards at the Wallace were wonderful and enjoyed the popularity of the show which is bringing in high visitor numbers.

Several figures have been quoted in regards to the installation of new silk walls and this was confirmed to be in the region of £60,000 - produced by silk manufacturers, Prelle of Lyon (favoured by Marie Antoinette as well as the Wallace). But the light blue striped silks in the two rooms will go with the works once the show closes and the walls will be recovered with a rich green design that is installed in the parallel wing of the house. In total however, it is believed Hirst paid a quarter of a million pounds to hold the exhibition and timing was everything. The two rooms used were scheduled to be renovated, so with Hirst funding the new floor and gilding on the ceiling, the Wallace allowed for the show to take place with half of the bill already covered to make way for the new Venetian Rooms where the collection's Canalettos et al will soon be hung.

I always enjoy the juxtaposition of setting in a contemporary art context and even though Hirst's lexicon of imagery from fags, to sharks and the exhausted skull remains, the show is a triumph - bringing new meaning to the saying, the Devil's in the detail.
Posted by Jonathan Velardi at 15:35