Amidst the Frieze furore of last week that reverberated across all corners of the capital, the stylish tranquillity of The Keeper’s House at the Royal Academy played host to an intimate evening in conversation with the artist and Royal Academician, Frank Bowling, OBE. Ahead of the abstract painter’s major exhibition opening this week at the Spritmuseum, Stockholm – home of the Absolut Art Collection - guests had the pleasure of being introduced to the exhibition’s curator Mia Sundberg, art historian Courtney J. Martin as well as critic and long-term friend of Bowling, Mel Gooding.

Traingone will showcase works produced in the artist’s New York and London studios between 1979 and 1996. The exhibition marks a resurgence of global attention that Bowling has received after his solo exhibition, Focus Display at Tate Britain in 2012.

The evening covered the artist’s colourful career that is famously reflected in his large-scale canvases. After graduating from the Royal College of Art in 1962, Bowling left London for New York with a “longing to be in literary things” and found his feet within the contemporary literary scene of poets and writers resisidng in the metropolis. It was there Bowling first met fellow Brit Gooding who developed an interest in the artist’s work and his inspiration, which was rooted in the works of great English painters such as Gainsborough, Constable and Turner. Gooding described Bowling at the time of possessing, “an inner knowledge of the works of American artists as a British outsider” while armed with classical foundations. This quality allowed Bowling a freedom to experiment on the canvas unseen before on the New York art scene that saw various influences of geometry and plastic materials manipulated to create sculptural relief on the surface. Charismatically, Bowling describes his practice as being  “intent on making competitive imagery”, which has seen his poetically titled works go on display in a number of prominent international exhibitions and collections throughout his career. 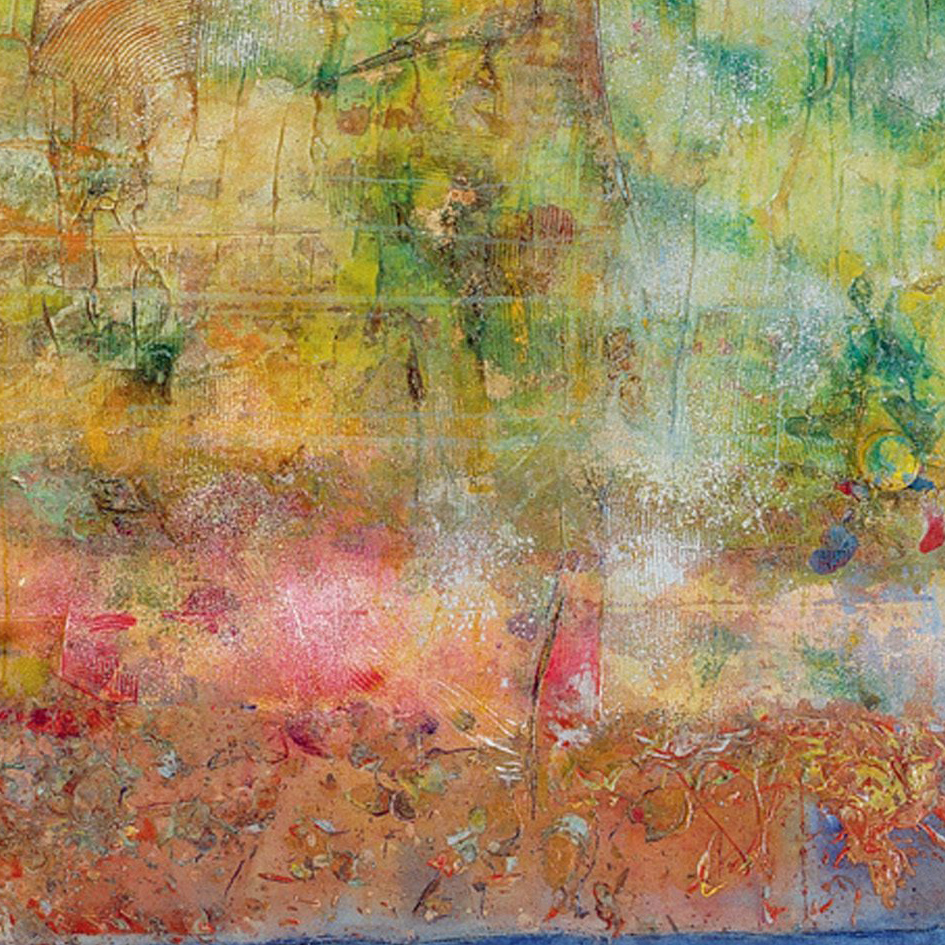 Detail - Traingone (Mahaicony Abary), 1996
Lauded by Gooding as a “master of Colour Field painting’, Bowling’s kelaidescopic-scapes attract the viewer with colour and entice in contextual dynamism – a formula that has proved Bowling’s foresight and endurance in today’s competitive painting market.

The 78 year old artist continues to work between London and New York and is represented by Hales Gallery, London.

Traingone by Frank Bowling, OBE RA opens at the Spritmusem in Stockholm, Sweden on 23rd October 2014 and runs to 6th April 2015.

Posted by Jonathan Velardi at 17:27