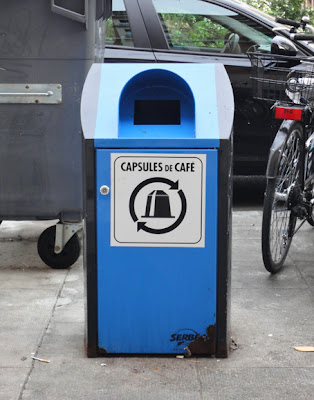 Posted by Jonathan Velardi at 04:07

The Art Of Packing

This week I'm in Europe with Studio Velardi and before leaving for my first pit stop in Geneva, Switzerland I've been featured on the lifestyle blog I Am Packed. Founded earlier this year and sponsored by Air New Zealand, the site features a selection of items, packed and ready to go for any eventuality by travellers from around the world. 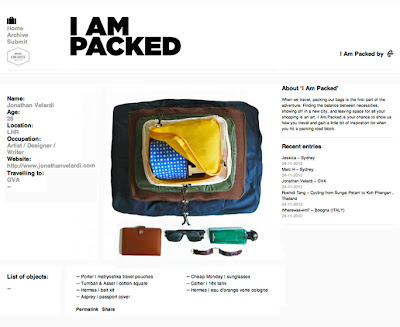 I Am Packed provides the necessary association of contemporary-cool that brands, such as Air New Zealand, look for within social media. The unexpected submissions that resemble more art, than casual throw-in-a-suitcase snapshot, give both blog and airline the curatorial credentials that will have everyone admiring the art of packing.

Check out what's inside my luggage between LHR and GVA here - more from Geneva on my return so until then, à bientôt tout le monde!

Posted by Jonathan Velardi at 03:41

The King of Pop Art, Andy Warhol said, “I want to be as famous as The Queen of England". Since the American artist’s death in 1987, countless retrospectives and iconic auctions of his trademark technicolour screen prints have travelled around the world, entering the public and private collections of the most powerful and popular personalities in the late twentieth and early twenty-first centuries. Contemporary culture continues to not only reference Warhol’s trademark aesthetic but also his intuitive prediction of the phenomenon that is celebrity today, coining the 'fifteen minutes of fame' expression in 1968,
“In the future, everyone will be world-famous for fifteen minutes". 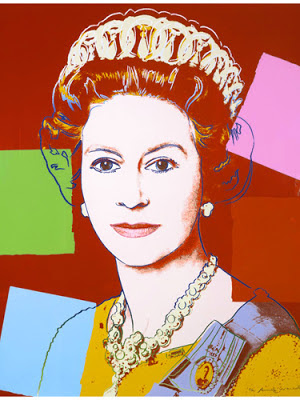 Queen Elizabeth II of the United Kingdom, Edition 'R' - Andy Warhol, 1985
If there is anyone who is to defy fifteen minutes, or fame for that matter, it is The Queen of England. Presidents, dictators and actors have come and gone, however it has been Queen Elizabeth II who has surpassed Warhol’s eclectic global subjects: way beyond fifteen minutes, eighty six years and counting, of which sixty have been to serve her country. In an era when it has been possible for artists, namely Damien Hirst, to become as wealthy as The Queen, it is the untouchable allure of Monarchy that transcends time and remains an inspiration for artists throughout history past, present and most likely future. Hirst is regularly likened to Warhol in practice and panache. Should Warhol have been alive today, Hirst would undoubtedly have some competition on both art and rich list charts, but more importantly he would realize he had achieved the levels of fame akin to the British Monarch. One thing that he may not have predicted was that the person he wanted to be as famous as would one day also be his collector. 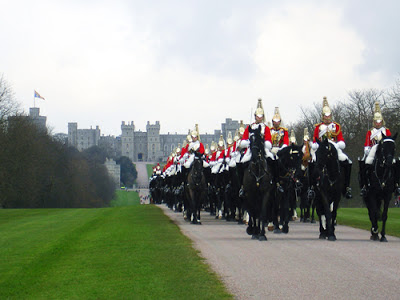 Windsor Castle in Berkshire - the world's oldest inhabited working castle
In the year that marks her Diamond Jubilee, in September The Royal Collection acquired a series of four screen prints of The Queen by Warhol. The four portraits on paper - edition 14 of 30 from Warhol's Royal Edition - were reworked from The Queen’s official Silver Jubilee photograph in 1977 by Peter Grugeon and form part of the portfolio Reining Queens, which include Queen Beatrix of the Netherlands, Queen Margrethe II of Denmark and Queen Ntombi laTfwala of Swaziland. Executed with a spectrum of colourways and sprinkled with fine particles of cut glass, known as ‘diamond dust’, the glittering purchase of Warhol’s work for The Royal Collection - property of the Monarch as Sovereign, held in trust for the British nation – signifies the conscious acceptance of the adage that has been synonymous of late with the House of Windsor: changing times. Joining the exclusive and spectacular roll call of artists from Holbein to van Dyck, da Vinci and Rubens, Lady Jane Roberts, Royal Librarian at The Royal Collection explains,
“The Warhol prints are in many ways the most important popular image of the queen to be created by an artist print maker over the last few decades.” 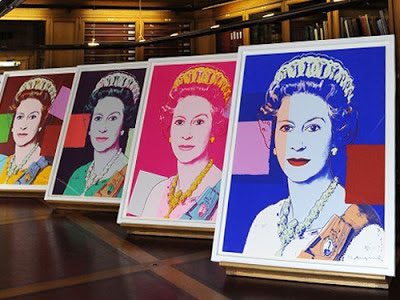 Opening today, the new works are on exhibit for the first time since their acquisition alongside select images by Beaton, Freud, Rankin and Leibovitz as well as a host of society photographers and international portrait artists as part of the exhibition, The Queen: Portraits of a Monarch, at Windsor Castle to commemorate the anniversary of the Queen’s Coronation next year. Charting the very first photograph of The Queen after her accession, taken by Dorothy Wilding, to subsequent official and Jubilee portraits commissioned by state and institution, the exhibition consists of works from different Royal residences and presents the image of a woman – a fact society seems to forget when erratic waves of feminist absence stir - whose face and expression has been captured in various sittings and moments in time; for canvas, coins, bank notes and postage stamps. 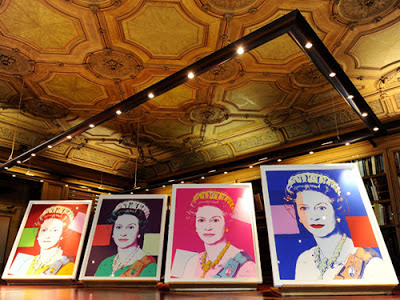 The addition of Warhol to the collection in this landmark year for Monarchy makes for quite the fairytale: a Queen-to-be and the son of Slovak American-dreamers, born within two years of each other, both conscious of one another in the public eye and yet leading polar opposite lives across the Atlantic, now come to share the exceptional historical status in both word and image. The conceptual process of repeat that the artist pioneered in the mid-fifties now resides under the Wyatville-designed ceiling of a woman whose very own face has been the most repeated image to date.

Pop Art’s message is often lost by its unashamedly superficial surface and familiarity with the language of advertising, however it is a movement that manipulates and exposes the everyday to new narratives for social reflection and its inherent nature of colour and repetition remains a potent product in demand across creative markets. As an admirer of Warhol and Pop Art, I have been fortunate to view his prolific body of work on my travels over the years and I was very excited today to be able to merely walk up the road and come face to face with his works in my hometown of Windsor, Berkshire. The Queen: Portraits of a Monarch is a refreshing display in contrast to the more traditional exhibitions that are sourced from the collection’s vast archives for the gothic gallery space at Windsor Castle. Consisting of a variety of mediums and expressions, each with their own individual story, the exhibition complements The Royal Collection’s permanent installation in the State Apartments and reminds visitors that the story of British culture and identity is living and breathing - beyond fifteen minutes, years, decades and centuries.

I’m sure The Andy Warhol Foundation – whose original collection is currently being auctioned to fund future expansion for the Visual Arts across America – feel a sense of pride that their founder’s dream posthumously came true.

Visit Christie’s for more details on forthcoming auctions from The Andy Warhol Foundation.

Posted by Jonathan Velardi at 04:06 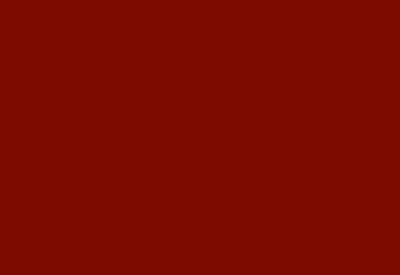 Happy Thanksgiving to all my American readers
across the pond and beyond!

Posted by Jonathan Velardi at 02:36 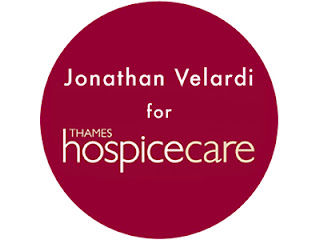 The curtains are beginning to be drawn on another year and with the chorus of Christmas now very much in the air, I thought it timely to share a personal seasonal message of my own before the clock strikes festive-mayhem and panic in a few weeks. I have been looking forward to the end of this year for some time and I may finally share with you, after a year in the making, news of the launch of my latest design collaboration with the charity, Thames Hospicecare.

Thames Hospicecare provides a palliative care service to those suffering from a terminal or life-limiting illness in my hometown of Windsor and Ascot in the Royal county of Berkshire. In 2009 my Mother, Lilli received the specialist care and support at the Hospice towards the end of her life after battling cancer for several years. I was guilty of projecting the stereotypes that many formulate around hospice care; it was not until my family had to access the support of the Hospice that I realised the overwhelming compassion and treatment that was received by all and how I am now deeply fortunate to hold what is a painful memory in a positive light.

I am eternally grateful to the Hospice's dedicated team of doctors and nurses as well as the bereavement support I received in the wake of my loss and at the realisation I no longer had family in Britain. I will never forget this time in my life and after much brainstorming on what I could do to say thank you, I approached Thames Hospicecare last year offering my design services. It therefore brings me great pleasure to announce a series of fundraising Christmas cards now available at Thames Hospicecare sites, shops across Berkshire and online. 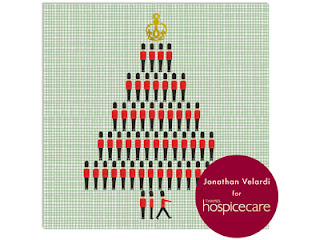 Fall In © 2012 - PURCHASE
Inspired by local and iconic scenes in this special year of both the Diamond Jubilee and Olympic and Paralympic Games as well as the Hospice's very own twenty-fifth anniversary, three contemporary designs depict Windsor Castle, the Copper Horse in Windsor Great Park and the serving soldiers that are synonymous with the town. I hope residents of Windsor and beyond will support Thames Hospicecare's invaluable work and ability to provide palliative care in East Berkshire through my exclusive designs during what is a vital source of income for the charity over the Christmas period. 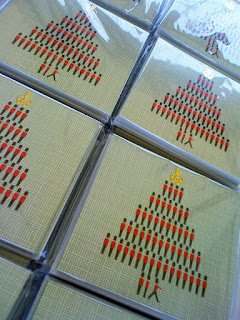 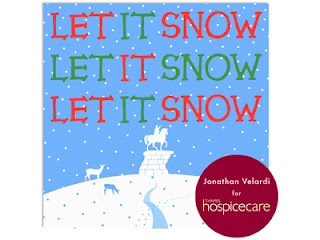 If you have been bitten by the British bug this year, please look to independent charities this Holiday season such as Thames Hospicecare by visiting their Christmas catalogue - 100% proceeds from sales go directly to the Hospice.
View the Press Release for more on the collaboration and my personal story with Thames Hospicecare.

Thank you very much for your support.

Posted by Jonathan Velardi at 04:09