When I graduated from The Slade School of Fine Art a few years ago, like any prospective professional ready to take the world by the horns, I cleaned off the slime that I was covered in after I popped the bubble of comfort that was university and the previous fifteen years of being a citizen of the state of education and began my hunt for a job. For those of you unfamiliar with the mechanics of art school, in short, it is no place to form any certified direction. I tell a lie - I earned the privilege of receiving my degree on a shred of fortune cookie paper and excelled in the laws of delusion. If this wasn't confusing enough, searching for the golden answer of "what do you want to do now?" coming at me from every direction was practically paralysing, but I looked for anything remotely creative and as far from a desk job as I could muster. When I found a job to assist a hotel with its design and brand marketing I applied immediately - tweaking my CV riddled with art exhibitions and Photoshop proficiency accordingly - I managed to secure an interview. The hotel in question was a well-known boutique firm that I was very familiar with. I knew the company was small with only a handful of locations in London and it had created a reputation of personality and taste that was reflected in all aspects of its brand. The interview went well - the compact team were friendly and I thought everything was encouraging. A few weeks later I was invited again for a second interview, this time with the wife of the husband-wife partnership and head of everything-design; a person of little time that I expected from someone at that position. Having reintroduced myself to her, rolling with the spiel of what I can do, offer and learn I sensed my time was up and I was more than happy to thank her for her time and return to the drawing board. What I didn't expect coming was the disapproving shift to her assistant who was sat beside her, "what about the telephone?" she said, as I sat across the small mahogany table, the room so silent with the heavy padding of magazines and design samples. While I may be able to write clearly, ask me to read aloud what I have just written now, or my last two-hundred and seven posts, I won't be as clear. I will probably stumble on the words beginning with vowels, hesitate if I'm feeling tired at anything that needs an "h" sound and force every plosive out as if it's my last. I have a stammer. It's been with me ever since I can remember. We have good days and bad days but since it is all that I know, it's most definitely a part of me and has not and will never stop me doing anything I want. While I thought I was having a 'good day' on the day of the interview, I will never forget the words uttered by the head of the design (who shall remain nameless) posing a question only I had the answer to yet it was as if I wasn't in the room, deaf to her own fluent speech. No one warrants that treatment, stammer or no stammer. Fortunately, this was one of the first instances I had experienced anything like this in all the then twenty-two years of my life. Thanks to my supportive upbringing I travelled through playgrounds and classrooms free from any bullying - if I was lucky enough not to be made to feel noticed amongst misinformed adolescence, why was such an ill-educated adult behaving this way? I have chosen to share this story on my blog because although I do not publicise my stammer, I thought it was apt since I went to see The King's Speech last week and ironically, I passed one of the hotels I had interviewed with many years ago, and noticed they were screening the film in their cinema room. I look back at that day and have to laugh about it - I hope that anyone else who has been in a similar position can laugh too, or at least swear profusely (and conveniently fluently) into the wind! 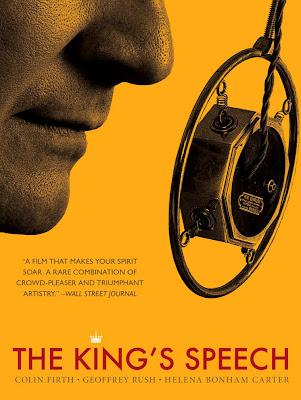 Practically a life's work for writer, David Seidler, he had admired King George VI since his childhood when he had developed a stammer and was inspired by news that the King had overcome his impediment. In adulthood, Siedler discovered the critical role speech therapist Lionel Logue had played in the King's life and only understood the true extent of this battle when The Queen Mother, the King's widow, had been consulted about the proposed film and asked for the story not to be published in her lifetime. Siedler's respect for this moving request is a testament to the inner struggle the King combatted and the strain it had on his life and that of his family. The film is typically British in every way, and its subject matter only adds to the charm and probably sympathy towards a story about class, privilege and the ability most taken for granted, speech. With Colin Firth's performance on the lips of everyone from The Mall to Hollywood Boulevard and a trail of critical acclaim, a growing cabinet of awards and approval from Buckingham Palace, The King's Speech is destined for success at this year's 83rd Academy Awards. 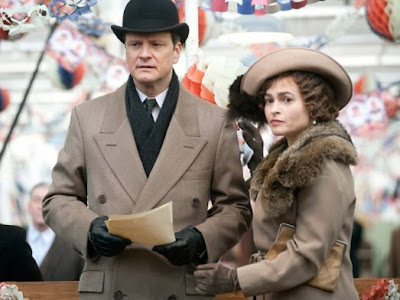 United front: Colin Firth & Helena Bonham-Carter
2011 will also be marked as one of the most important periods for one of the oldest firms in the world with the marriage of Prince William and Catherine Middleton taking place in April; the release of Madonna's anticipated cinematic offering of the controversial love affair between King Edward VIII & Wallis Simpson in W. E., that also features in The King's Speech, due for release later in the year and the Queen's historic Diamond Jubilee in 2012 - anything relating to the British Monarchy receives the golden touch. So while director, Tom Hooper will be placing his bets for golden statuettes for all his cast - from Firth, Helena Bonham-Carter and the humorous Geoffrey Rush as Lionel Logue - the awareness of stammering will also take a gamble, placing itself centre stage in order to reach out to the young, old and misinformed. 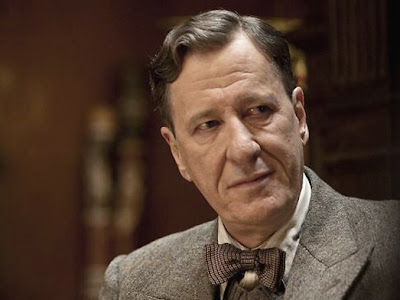 Geoffrey Rush as Lionel Logue
Place your bets now for a straight flush for Britain on the 27th February at this year's Oscars - if you would like more information about stammering visit the British Stammering Association here where you can also find out more about Lionel Logue and his unique approach to speech therapy that gave King George VI his voice back. The King's Speech is showing at cinemas nationwide.
Posted by Jonathan Velardi at 14:57