Big, brash and attention seeking are adjectives commonly used to describe hoardings, let alone a city that is reflected in the very make-up of its landscape. The Los Angeles skyline is famously known for its billboard culture across its sprawling topography with a rich history of roadside temptations aimed at residents and transients alike. Nowhere is this vie for attention more prolific in the city than on Sunset Boulevard, which cuts through L.A. from East Downtown to the Pacific Ocean on the Westside. 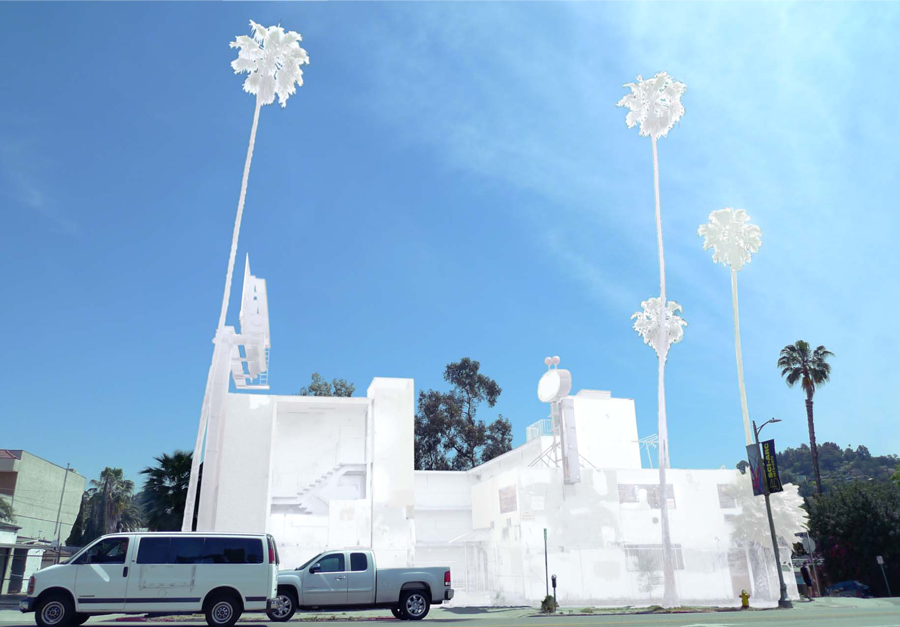 Artist impression: 'Projection', 2015
On a stretch of the boulevard running through the neighbourhood of Silver Lake, French artist Vincent Lamouroux will transform the skyline this April and May with a unique site-specific intervention at the former Sunset Pacific Motel. The site, located on the corner of Sunset Boulevard and Bates Avenue, has been the scene of much unrest in the community for over a decade. Having earned the unfortunate moniker of the ‘Bates Motel’– less for its address and more for its reputation à la Hitchcock’s ‘Psycho’ during its neglected course – the three-storey building has been boarded up and fenced off since 2002. With all of its shortcomings however, there remains much nostalgia for the motel, which retains its original futurist sign topped with decorative antenna globes. Development is rife across L.A. and the residents of Silver Lake are no different to other neighbourhoods who are voicing concern when applications for new development tread on community conservation. Demolition of the motel was granted in 2009 and the future of the site is in its final stages. In the meantime, Lamouroux will shroud the motel and its adjoining accoutrements of billboard, vegetation and palm trees in a lime whitewash, in what will be his most ambitious work of art to date: Projection.

The Paris-based artist has known the site for nearly fourteen years, witnessing its dilapidation year after year. He began to think about creating an artwork in L.A. inspired by his minimalist practice that used the ecologically-safe and biodegradable solution of a limewash, previously applied in several public artworks in France, such as in a forest with ‘Aire 23’ in 2010 as well as interior interventions in ‘Attenuate’ and ‘Passage’ in 2014. “This particular site was the best place to conceive the ideas that encapsulated everything that interested me: this city and its landscape; the idea of space and driving your car; these elements in conjunction with the building, the palm trees, Sunset Boulevard and the Sunset Pacific Motel sign”, explains Lamouroux. Familiarity, perception and ephemerality are key elements to the work. He continues, “we are constantly looking for symmetry and something we can connect with in the past: something we already know”. The action of whitewashing is a conceptual means for the artist to, “free the landscape in time and space… to make something appear in the middle of the urban landscape”. ‘Projection’ will be the first time he will work with an exterior architectural space – “when I’m working in an interior space, there is a frame: the walls, the floor and the ceiling. On this project I am outdoors but the concept of the frame remains: the horizontality of L.A., the fence around the motel. The frame is something that I will define myself by playing with these physical properties”. 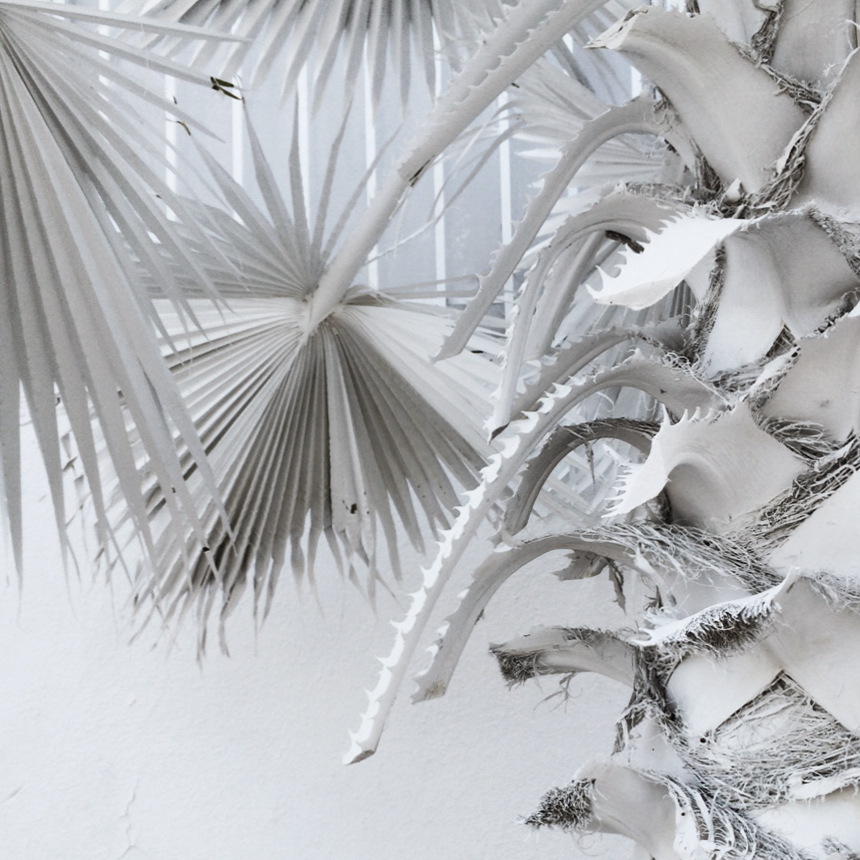 Lamouroux believes the palm trees on the site, which line this entire section of the boulevard, will draw the eye of drivers and passersby down to ground level to reveal not only the extraordinary matte white covering in full but of a building that has lost its power to engage since its all too familiar, neglected state. The platinum palm trees against the famously blue L.A. sky will interrupt the horizon and create an impressive visual amongst their natural counterparts. While the whitewash invites a revaluation of our surroundings, it also performs a negative gesture of erasing the appearance of the familiar. Nicolas Libert, co-founder of curated space Please Do Not Enter in Downtown L.A., who is producing the installation with the support of Creative Migration, illustrates how ‘Projection’ represents the story of Sunset Boulevard: “all the businesses try to catch your eye with huge signs, billboards, neons – Vincent’s simple manipulation on the appearance of the building with this whitewash will result in generating a greater statement than all the other distractions on Sunset. It’s more powerful than any advertising strategy. This negative gesture will celebrate the architecture and the old way of life in the city of L.A.”

The artist’s intentions are honestly declared in the artwork’s title. Inspiration, aspiration and hope are all concepts to be projected onto the blank architectural canvas. Lamouroux cites society’s unease with change or transformation as a means of positively reengaging with the greater public – “most of the time we don’t want to see transformation, but it’s always happening. Looking at the motel today, it’s definitely not the same as it was fourteen years ago. It’s degraded in time. I’m trying to beautify this site – to inspire what is now a lost site”. On why the site is lost to begin with and its future as a redevelopment, the installation is decidedly apolitical in motive and any symbolism linked to an all-white surrender, truce or silent statement around the long-term cultural context of the motel is not to be misinterpreted. “When Vincent talks about how transformation and change is hard to accept, this is what is happening now, especially in the Silver Lake community as well as across many communities of L.A.” Libert explains. “The work is able to be read in so many ways. Vincent is not taking a position on these issues, but he is pointing out the idea of appearance and disappearance. ‘Projection’ implies a screen that one can project what is on one’s mind: one’s dreams, expectations, nostalgia – it is inevitable that viewers who are struggling with the change in the community will project a political layer on the artwork”. 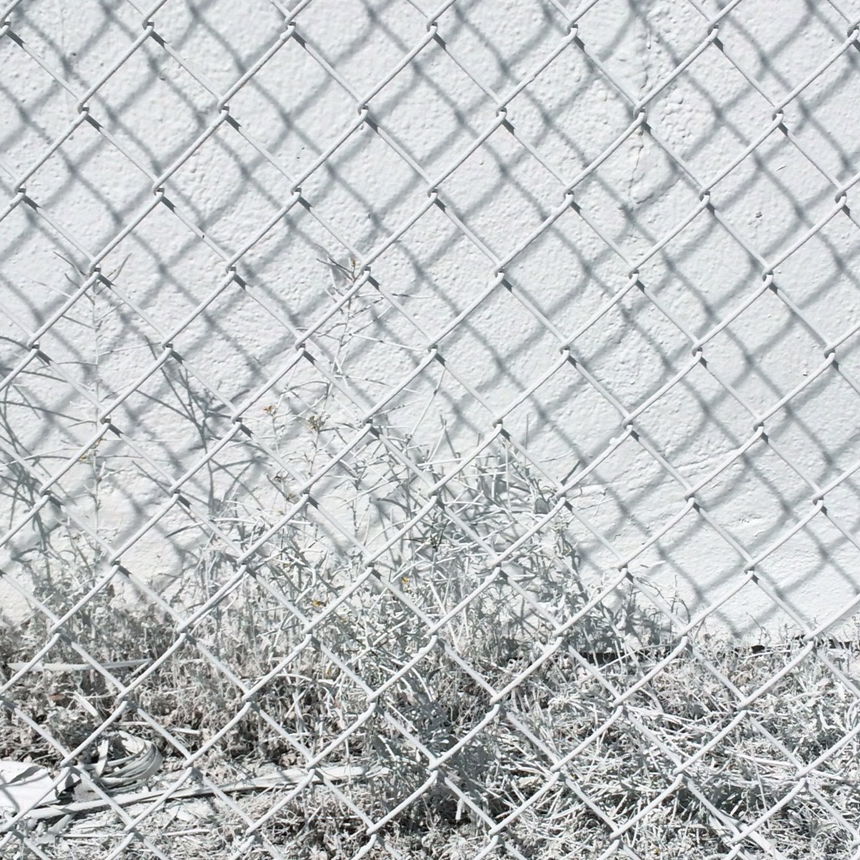 For Lamouroux, ’Projection’ is about “something you carry in your mind”, whether it be passing in your car for a brief moment or walking and experiencing the building head-on. After two weeks the lime whitewash will gradually fade, leaving a limited window for visitors to project onto the motel’s all-white surface. Until then, the site will unquestionably emit a curiosity never before seen along Sunset Boulevard under the bright Californian light, casting crisp silhouettes. When the sun sets on Sunset, the artist recognises his artwork’s vitality, avoiding any spectacle come nightfall – “Sunset Boulevard is saturated with signs in this 24/7 commercial landscape. I like the idea that the building has to sleep in order to dream. It’s the same for us; in order to dream we need to rest and this is very much how I want the building to function”. Little separates entertainment and escapism apart. As 'Projection' wakes from its daily slumber, Lamouroux will take comfort in the fact his work will have plenty of day dreamers in the land where dreams come true.

‘Projection’ will run at 4301 Sunset Boulevard in Silver Lake, Los Angeles from 26th April to 10th May – viewing is available around the perimeter of the fenced site on Sunset Boulevard and Bates Avenue.

Follow the hashtag #ProjectionLA on social media for the duration of the installation for the latest information and images.

I will be live tweeting from the press view this Sunday 26th April @jmvelardi and on Instagram @jonathanvelardi.com

Top image courtesy of Please Do Not Enter

Posted by Jonathan Velardi at 11:35