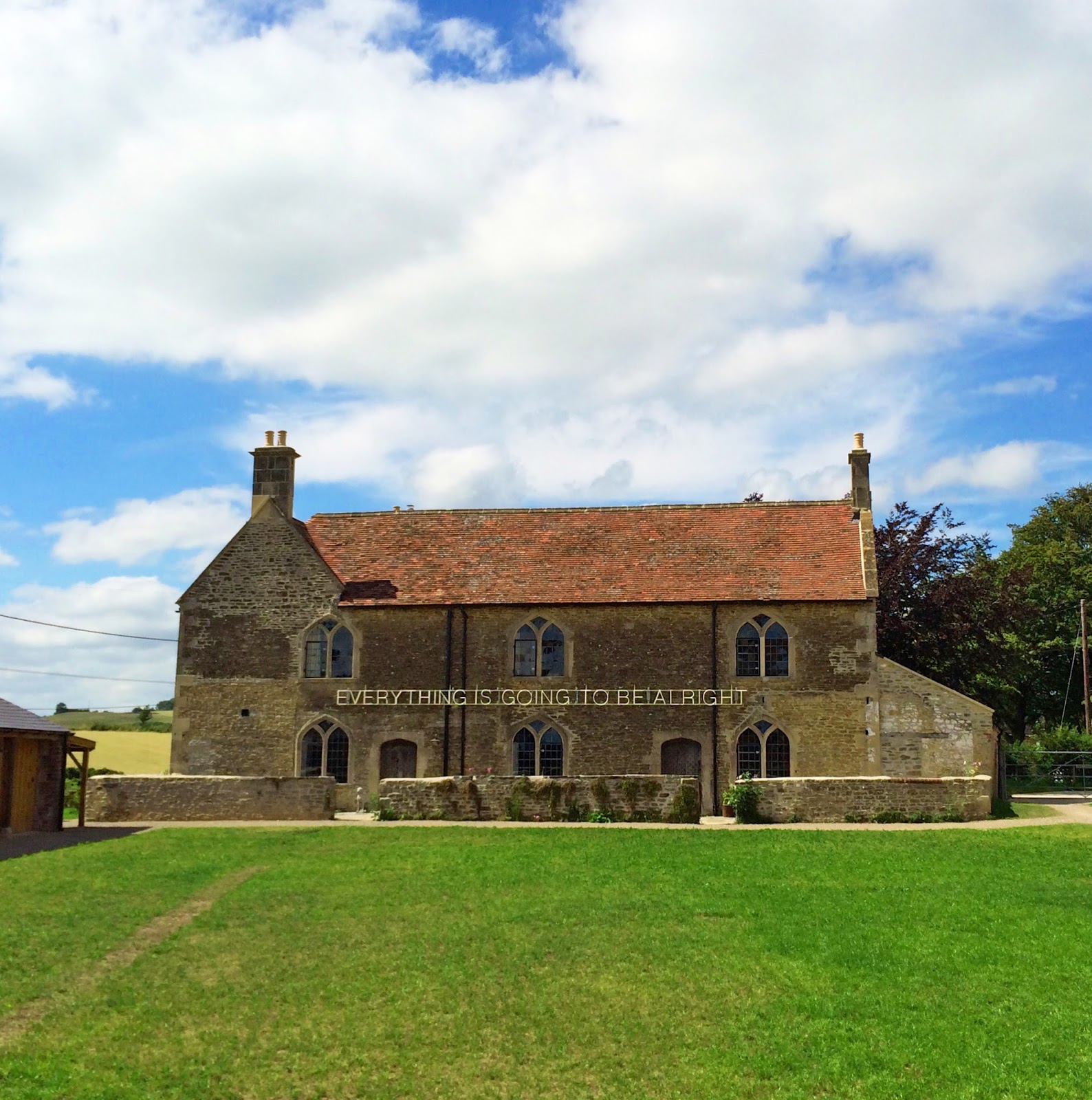 Work No. 1086, EVERTHING IS GOING TO BE ALRIGHT, 2011 - Martin Creed
For unnerved Londoners who make the two-hour journey to the historic town of Bruton from the capital, where white walls and polished concrete floors maketh a contemporary art gallery, Martin Creed’s Work No. 1086 welcomes them into the farm yard surroundings of Hauser & Wirth’s new Somerset outpost with the neon words, EVERYTHING IS GOING TO BE ALRIGHT. Whether you need the reassurance or simply appreciate the humour, visitors to Hauser & Wirth Somerset need not fret. There are no cattle grids to get your Louboutin heels stuck in and the paved paths around the green verges will avoid any soggy suede soles. As refreshing as the country air, Hauser & Wirth Somerset is not to be mistaken for a gallery exclusively catering for London-centrics on the weekends. While Bruton may seem a little out of place on Hauser & Wirth’s roster of international outposts in London, New York, Zurich and soon-to-be Los Angeles, there is more than meets the eye to this rural enterprise. 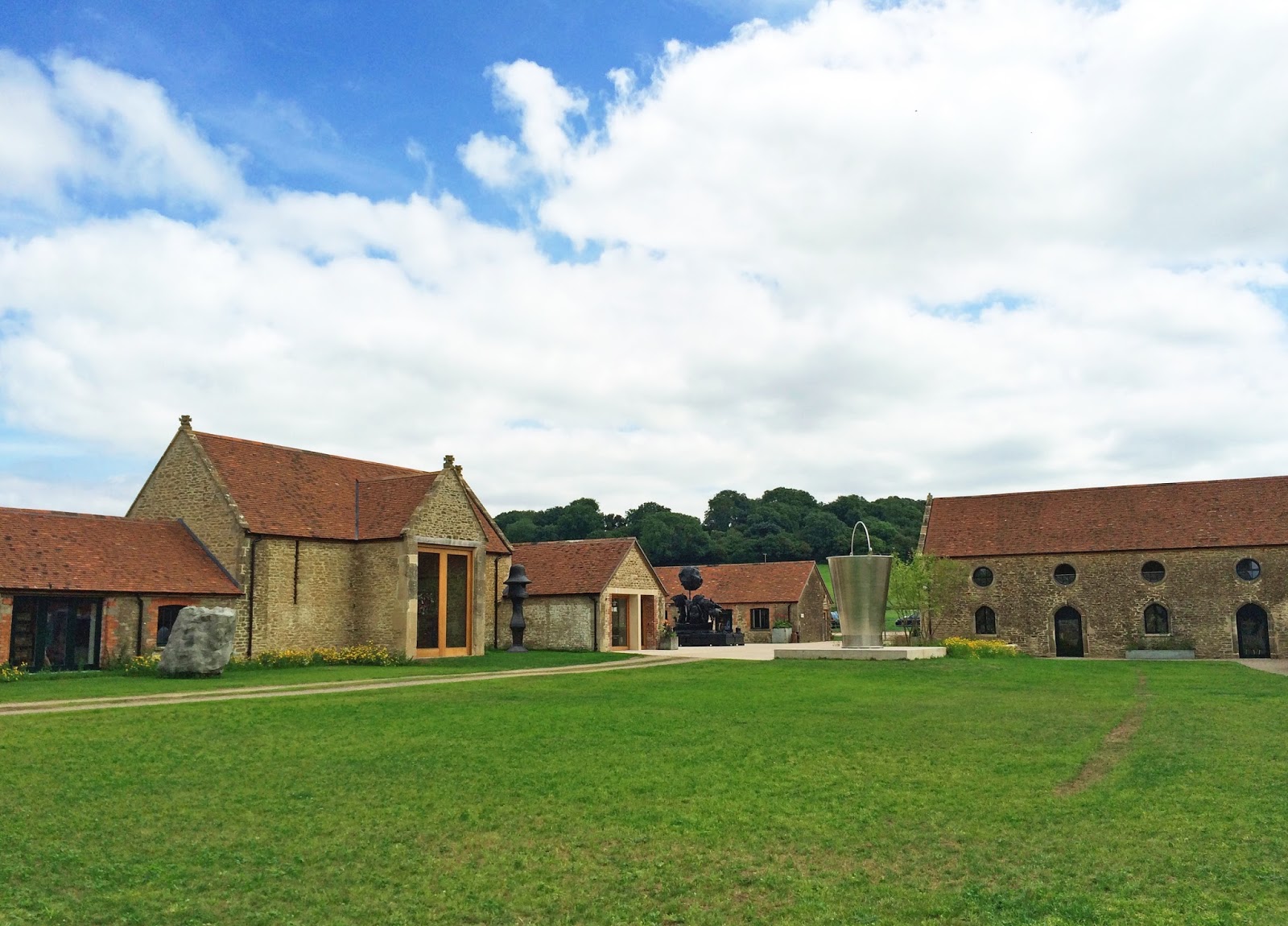 Hauser & Wirth is an influential player in the contemporary art world, which represents a collection of major league international artists and the estates of late modern masters. Iwan and Manuela Wirth are the successful power couple behind the commercial gallery and after moving to the UK from Switzerland in 2005, they subsequently discovered Somerset and the Dursdale Farm estate on the outskirts of Bruton. 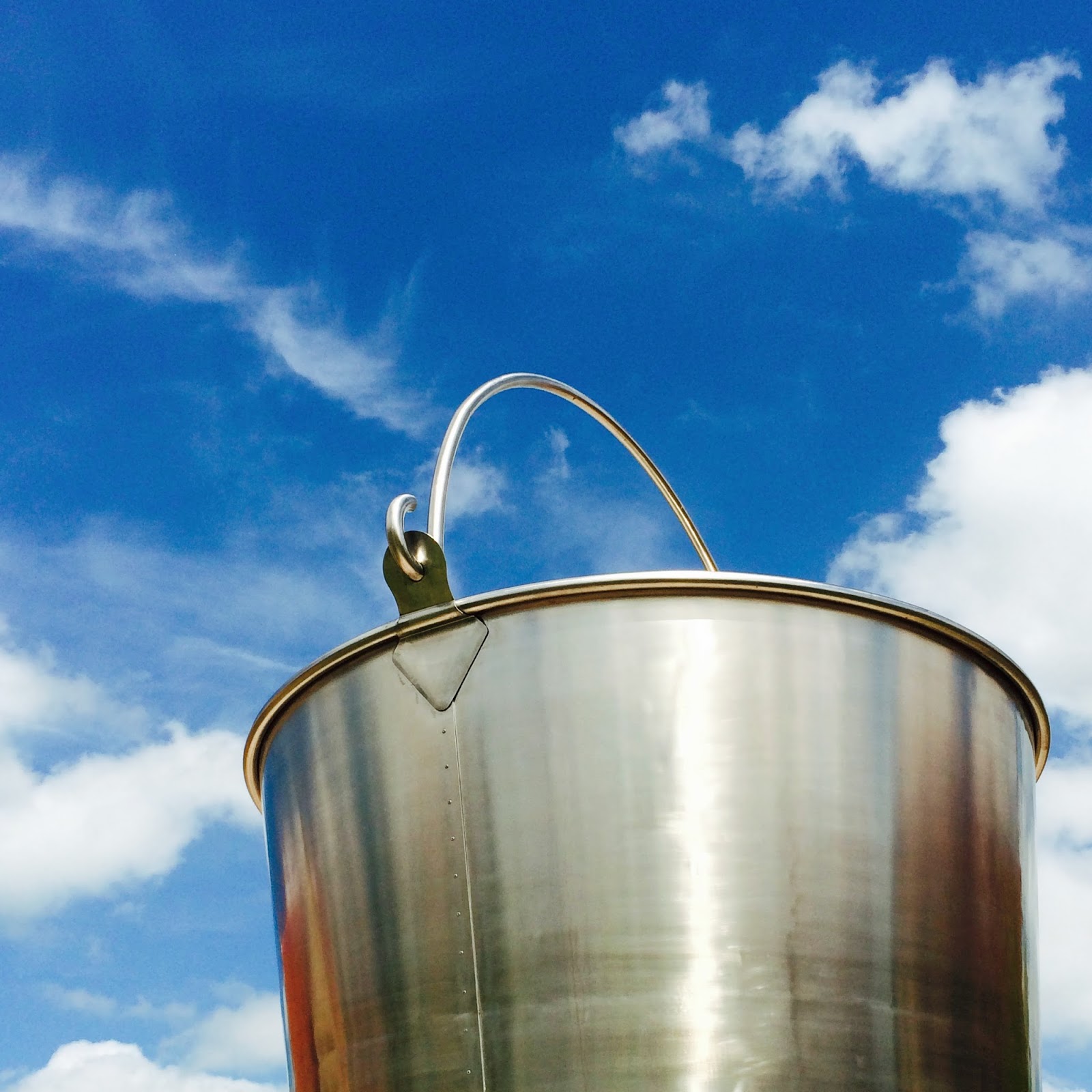 Untitled, 2008 - Subodh Gupta
Dursdale was a working farm for more than a thousand years and its history spans from the medieval and aristocratic through to the cinematic, serving as the location for Lasse Hallström’s 2000 film, Chocolat. After extensive local consultations, works began on restoring the dilapidated barns, stables, outhouses and neo-Gothic Grade II-listed farmhouse into a commercial gallery, art centre and restaurant across several buildings, all conceived by Paris architects Laplace and built by local firm Benjamin + Beauchamp. 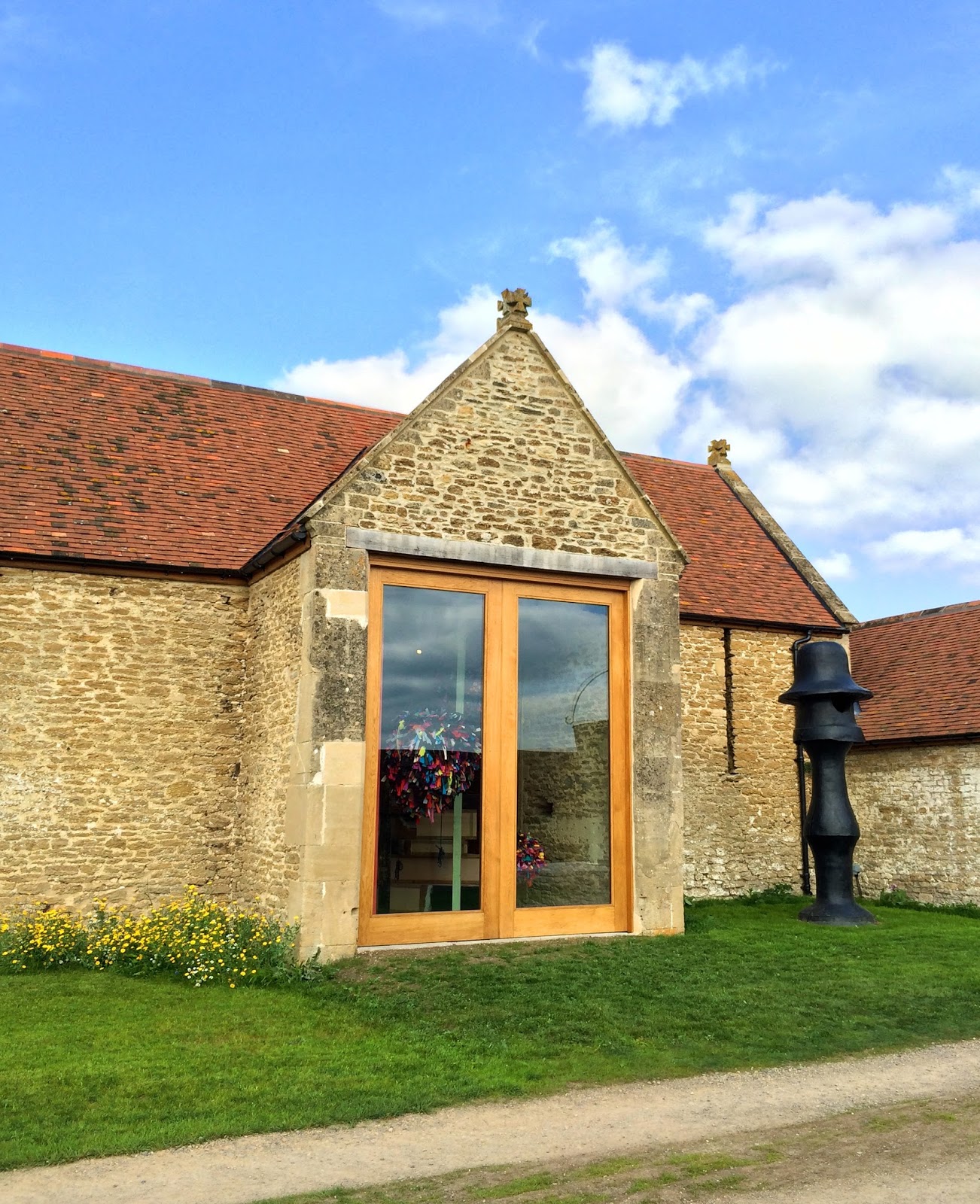 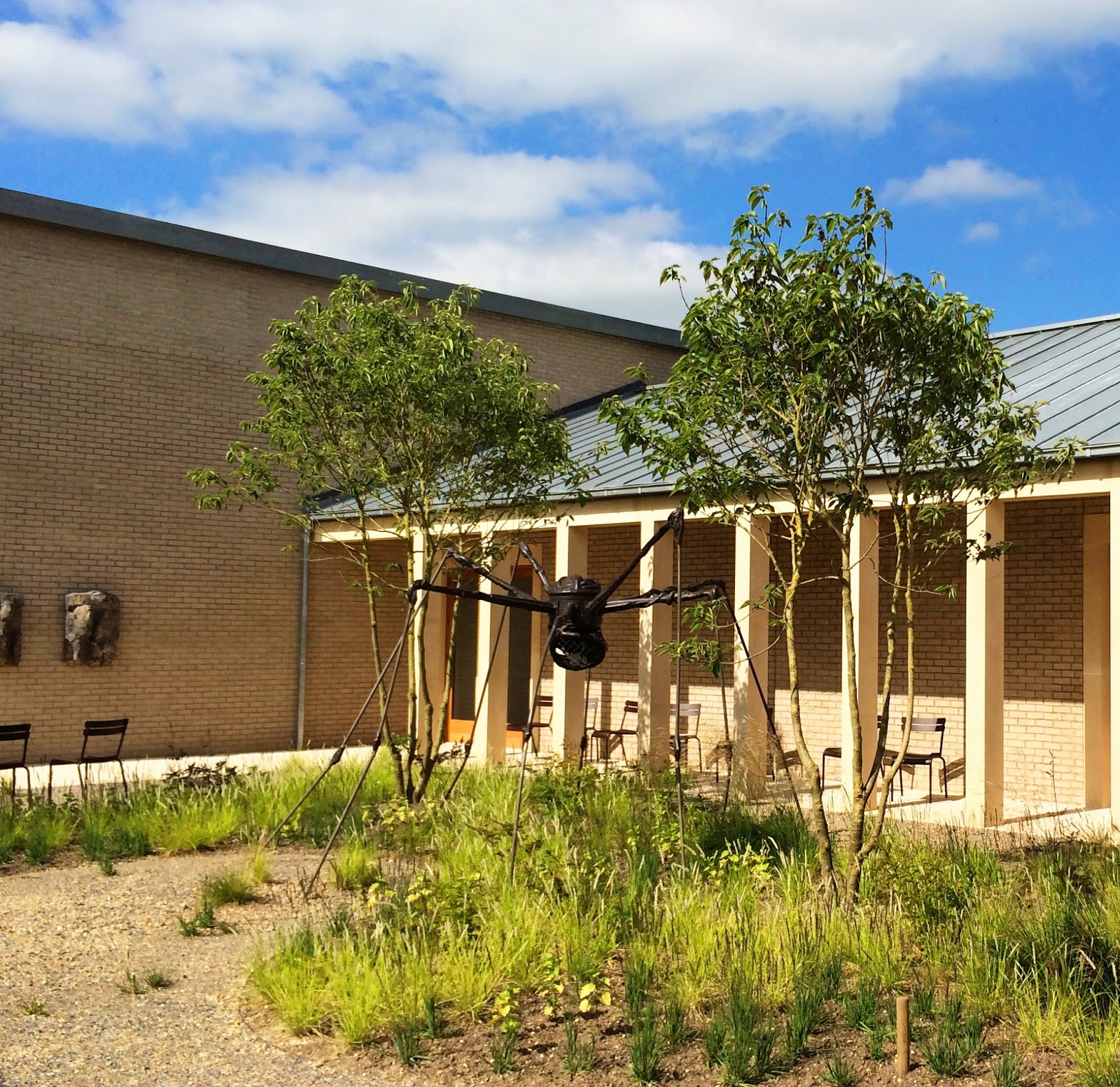 Spider, 1994 - Louise Bourgeois
The result is a beautifully executed setting where contemporary art and lifestyle meet through a middle-of-nowehere guise that is adventurous as it is familiar. Familiar, because there is arguably an air of the lifestyle destination that roving middle classes have come to relish of late. It also follows the growing trend of displacing contemporary art into alternative environments. This formula is nothing new. Works by the world’s leading artists can be found in isolated sculpture parks or converted factories and warehouses from Yorkshire and Upstate New York to islands off mainland Japan, respectively. Gagosian Gallery’s niche space in a converted hangar at Paris’s Le Bourget airport has been attracting visitors since 2012. The concept may be de rigeur, however the Wirth’s objectives in Somerset are distinct and faithful to the local community. This is reflected in the appointment of Alice Workman, director of Hauser & Wirth Somerset, who hails from Roche Court’s New Art Centre in Salisbury and Southampton City Art Gallery in the South West. Workman therefore understands the subject of art accessibility outside of the M25. The surrounding cities of Bristol, Exeter and Southampton simply cannot compete with the cultural saturation that London so easily attracts. Somerset County has also endured severe cuts to its arts funding and suffered a devastating flooding crisis last Winter. Far from being a vanity project, Hauser & Wirth Somerset is a cultural and economic lifeline for this area of South West England. Business is after all what commercial galleries excel at. Provincial attitudes are alien in a globally nomadic twenty-first century - the new gallery will introduce international art to the region in as much as introducing the region to international artists who will exhibit or take up artist residencies at the new space. 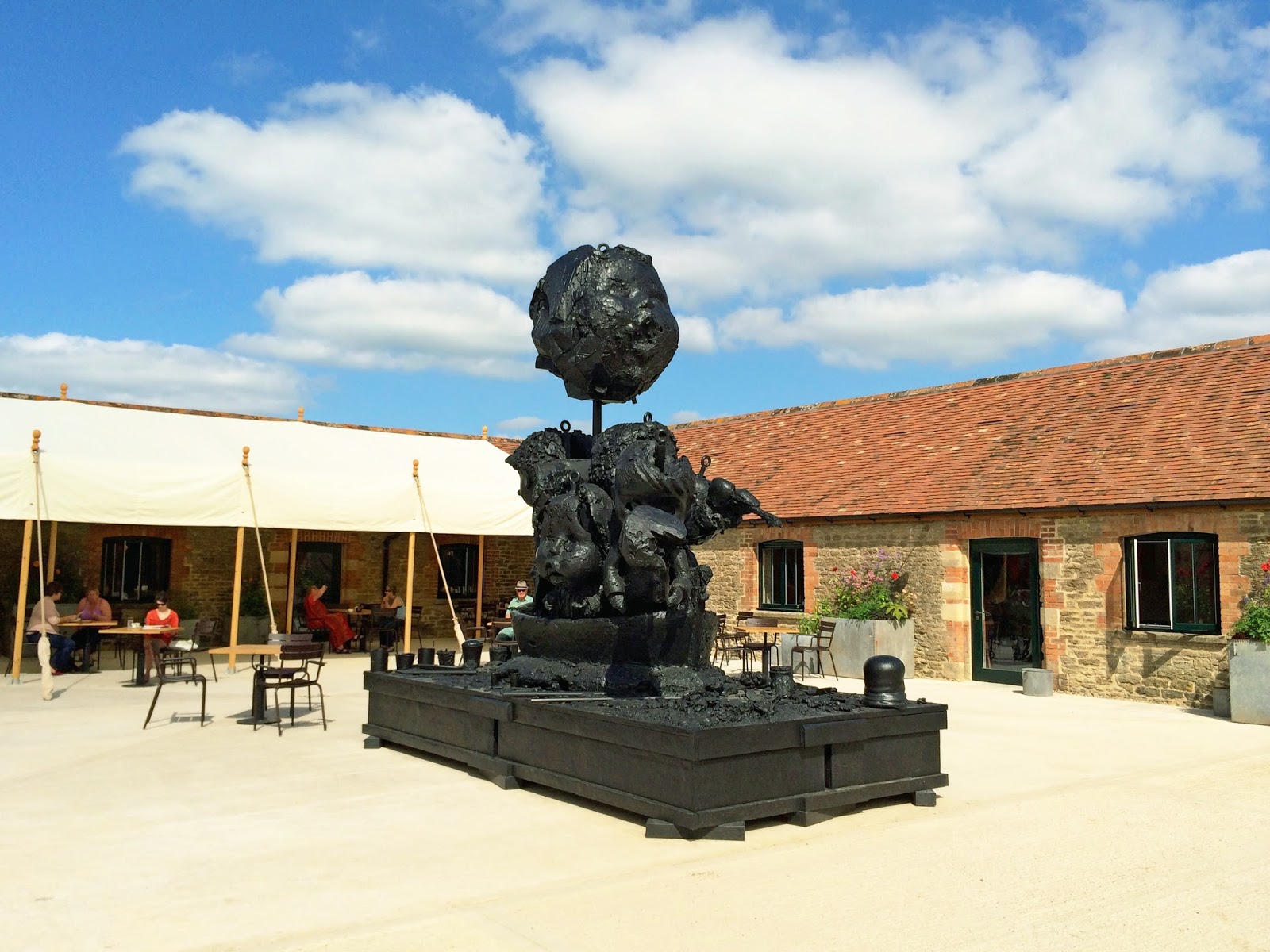 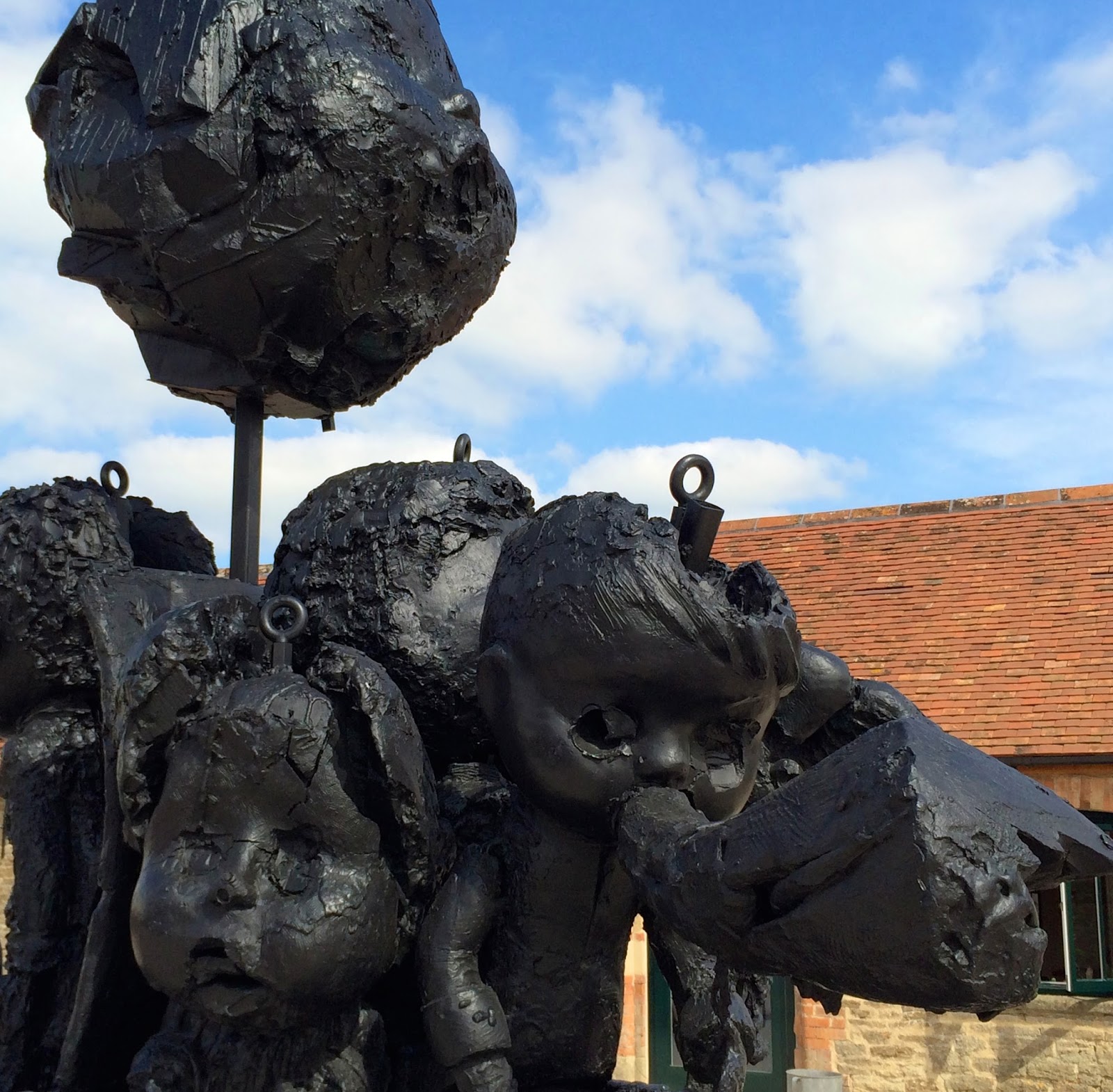 Ship of Fools, Ship Adrift, 2009-2010 - Paul McCarthy
The launch of Hauser &a Wirth Somerset features several large-scale outdoor installations by Paul McCarthy, Thomas Houseago, Louise Bourgeois and Anri Sala – statement works that create an extraordinary juxtaposition amongst the agricultural landscape. Piet Oudolf - garden designer behind major public commissions including the High Line in Manhattan, New York, Chicago’s Millennium Park and the Queen Elizabeth Olympic Park on the site of the London 2012 Olympic Games – also contributes with a sinuous garden design over a 1.5 acre meadow that will open to the public on 14th September. 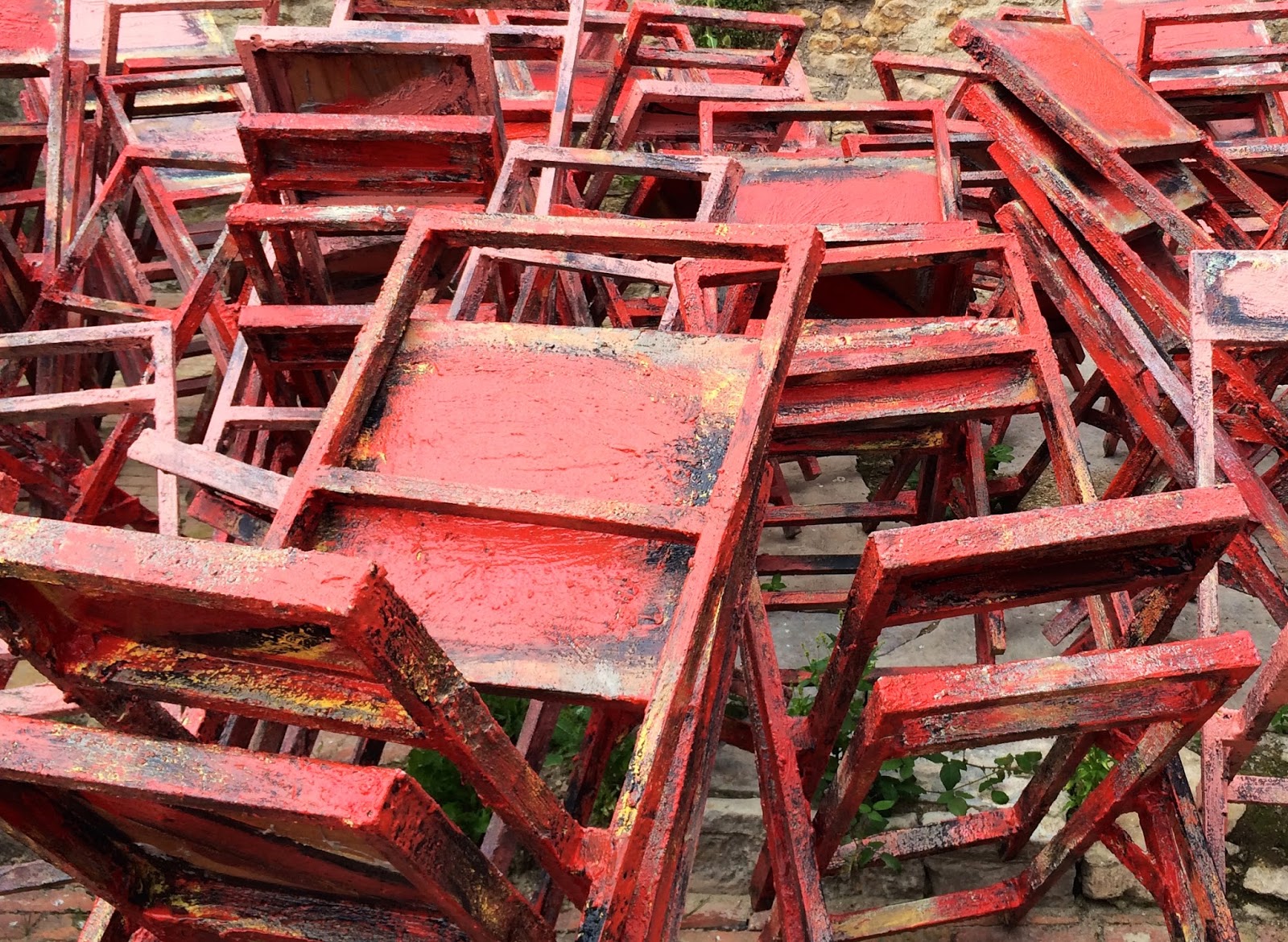 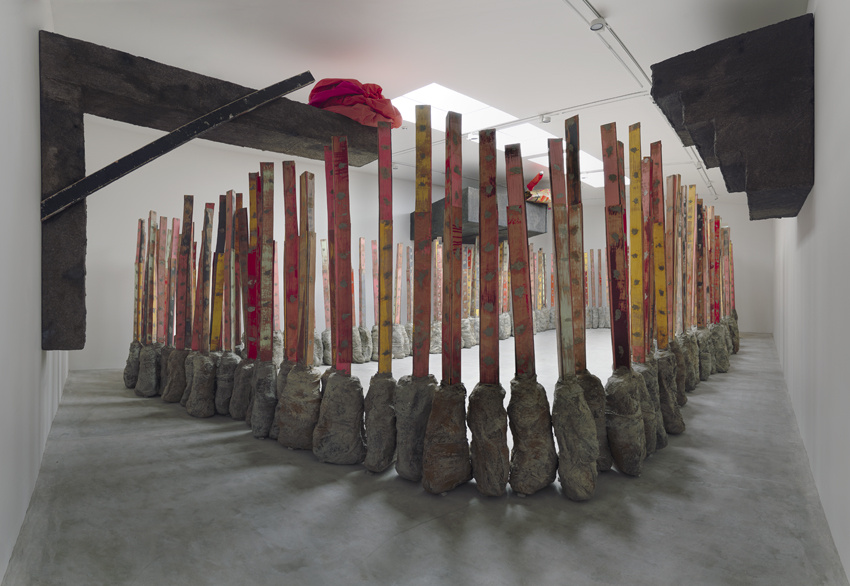 untitled: postscorral, 2014 - Phyllida Barlow
Following Barlow’s colossal commission dock in Tate Britain’s Duveen Galleries, GIG comprises of several works that were created in response to the architecture and surrounding landscape. The network of these spaces – a Piggery, Pigsty and Threshing Barn – maintain their original beams and features, and include one positively white cube space – a nod to the gallery’s distant Mayfair sibling. 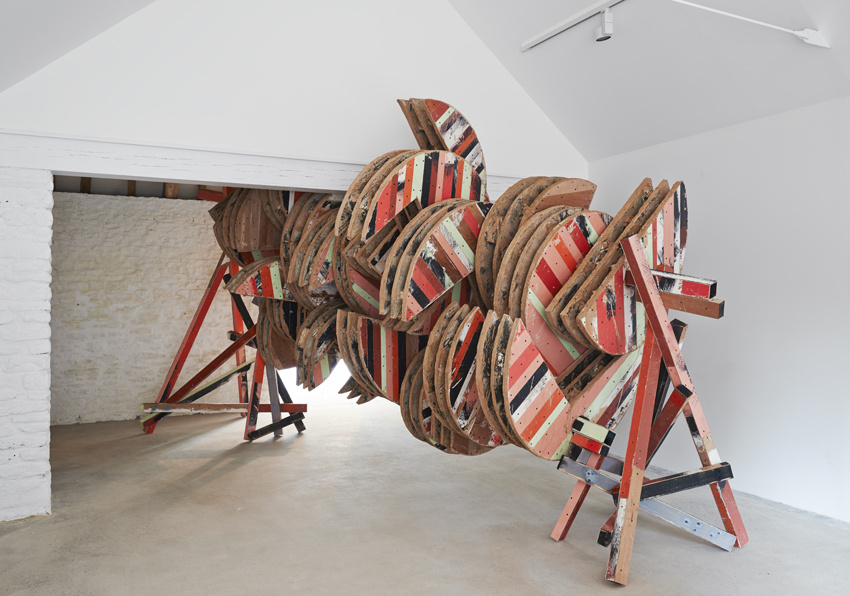 untitled: grinder, 2014 - Phyllida Barlow
The installation, untitled: postscorral, showcases a series of supersized upturned matchsticks in Barlow’s signature materials of timber, cement, scrim and wire netting. Visitors circumvent the edges of the space and encouter other gravity-defying works on the walls and ceilings. untitled: grinder is an energetic sculpture that seemingly ploughs through the walls of the Pigsty with its static cogs or fluting, each candy-striped in a multi-coloured palette of pinks and yellows. A free-standing horseshoe-shaped sculpture neighbours the space with its apertures running from top to toe along its edge. The Threshing Barn displays an explosion of textural pompoms suspended from a frame that mirrors the barn’s joists at different heights. These piñata-esque creations made from colourful fabric and paper are attached by cord whose ends hang in touching distance to the ground, tempting visitors to unravel its ties and release the pompoms from the air. They surround a stage, untitled: pianoframeandcover, with abstract representations of the work’s namesake that roots Barlow’s GIG in a visual cacophony of colour, form and scale. 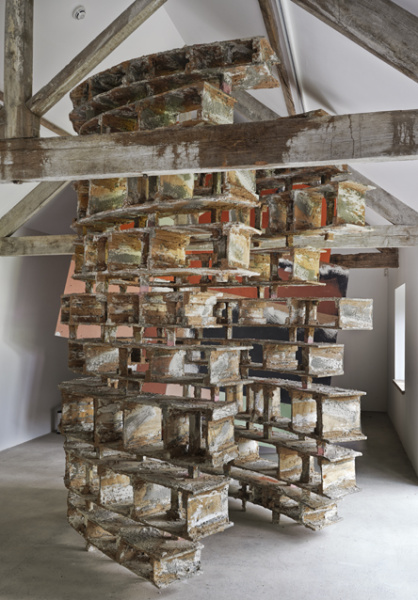 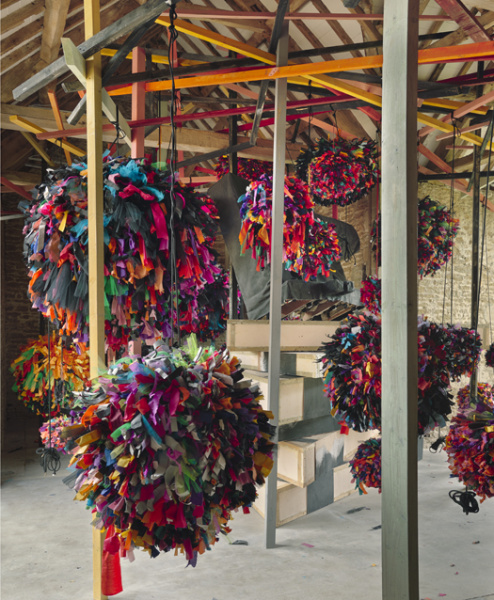 untitled:GIG, 2014 - Phyllida Barlow
Charm is not often used to describe the clinical spaces of contemporary art galleries, however Hauser & Wirth Somerset has it in bucketloads – cue Subodh Gupta’s supersize replica – from architectural preservation and sympathetic restoration, to the bespoke canvas smocks worn by the invigilators and the exposed kitchen displaying farm-to-fork produce in the Roth Bar & Grill. The lifestyle elements of the gallery complex include the walking trails through Dursdale Farm up to the impressive sixteenth-century Dovecote that looks down upon Bruton and the vales beyond. 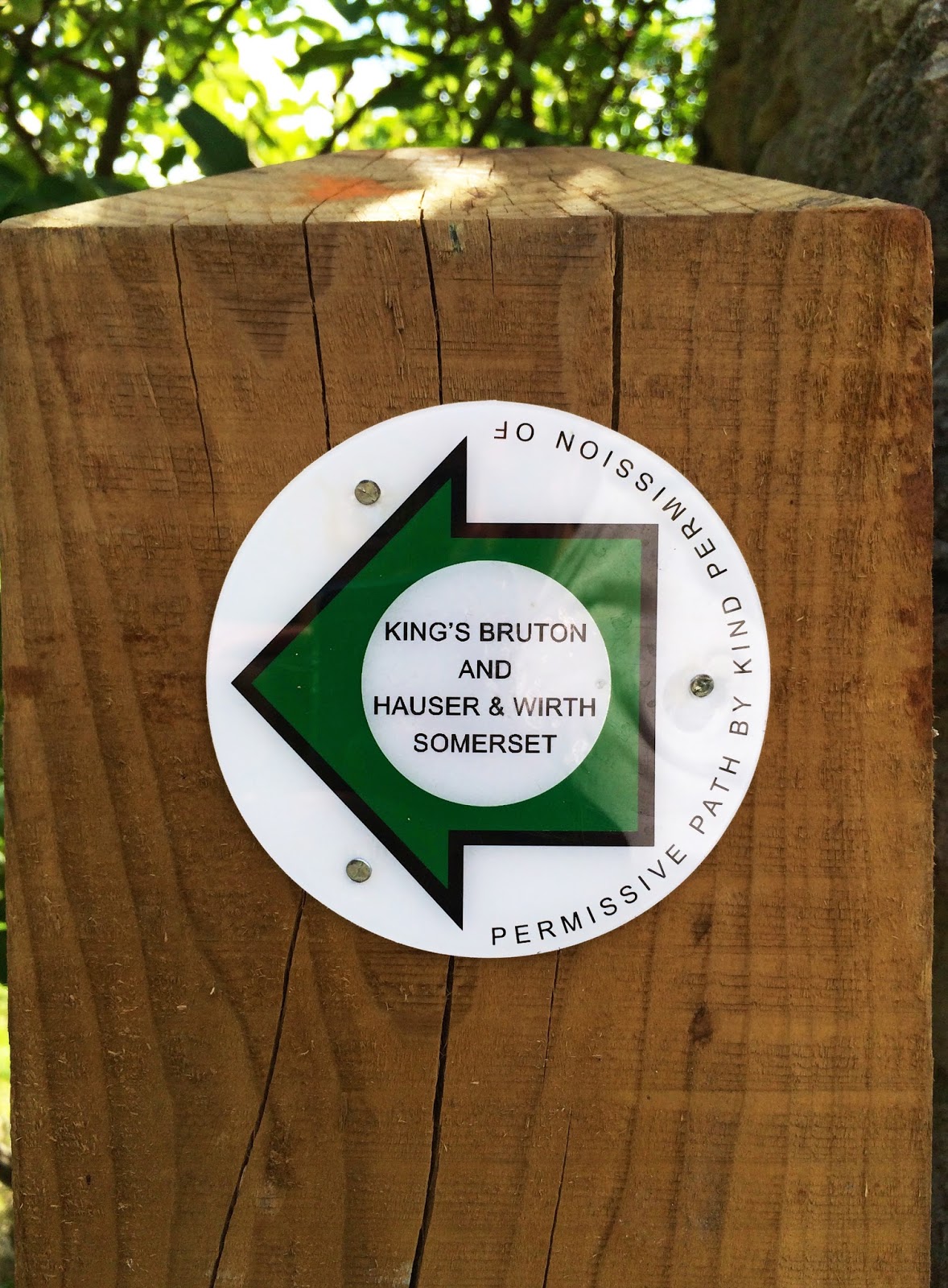 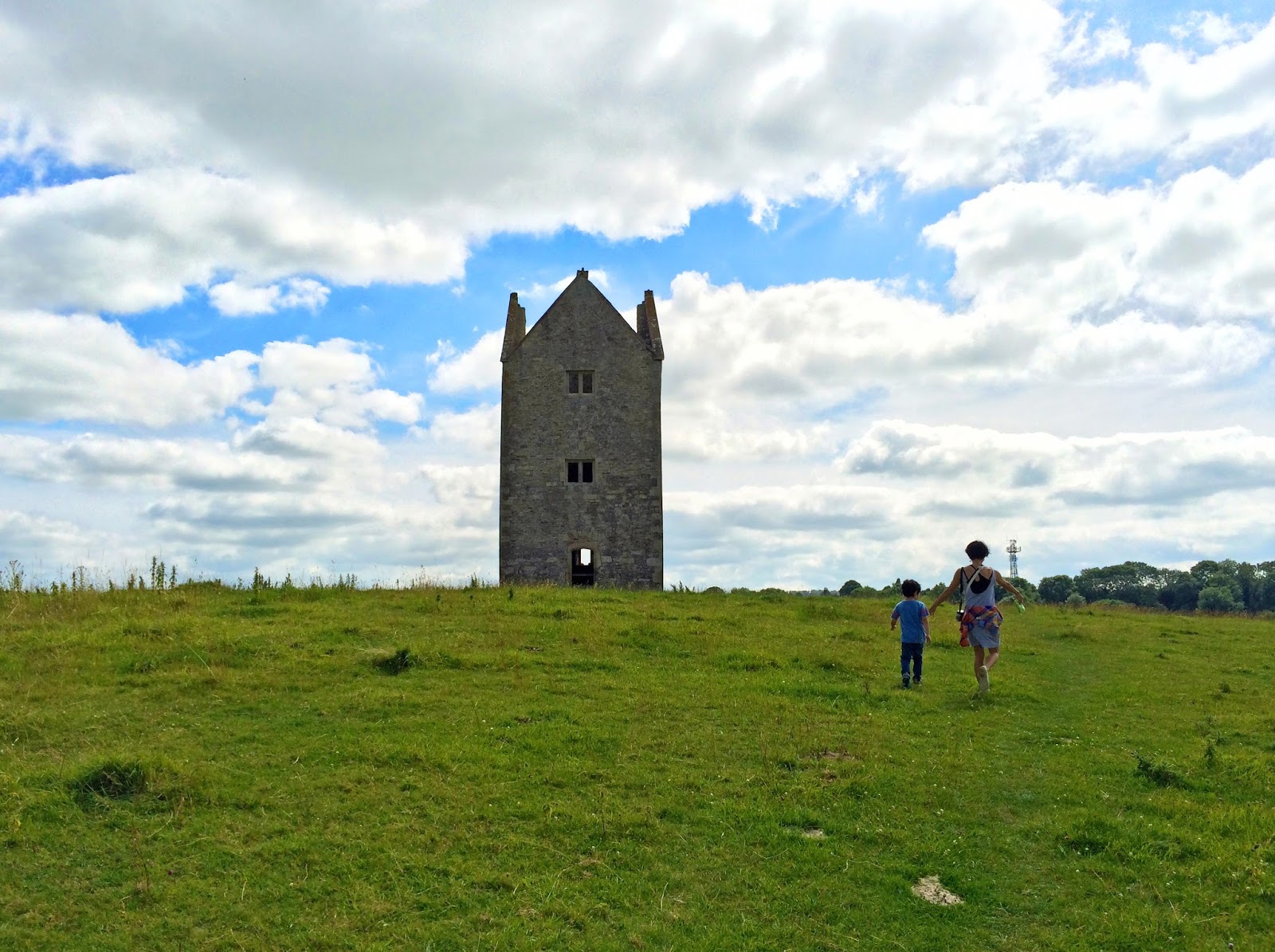 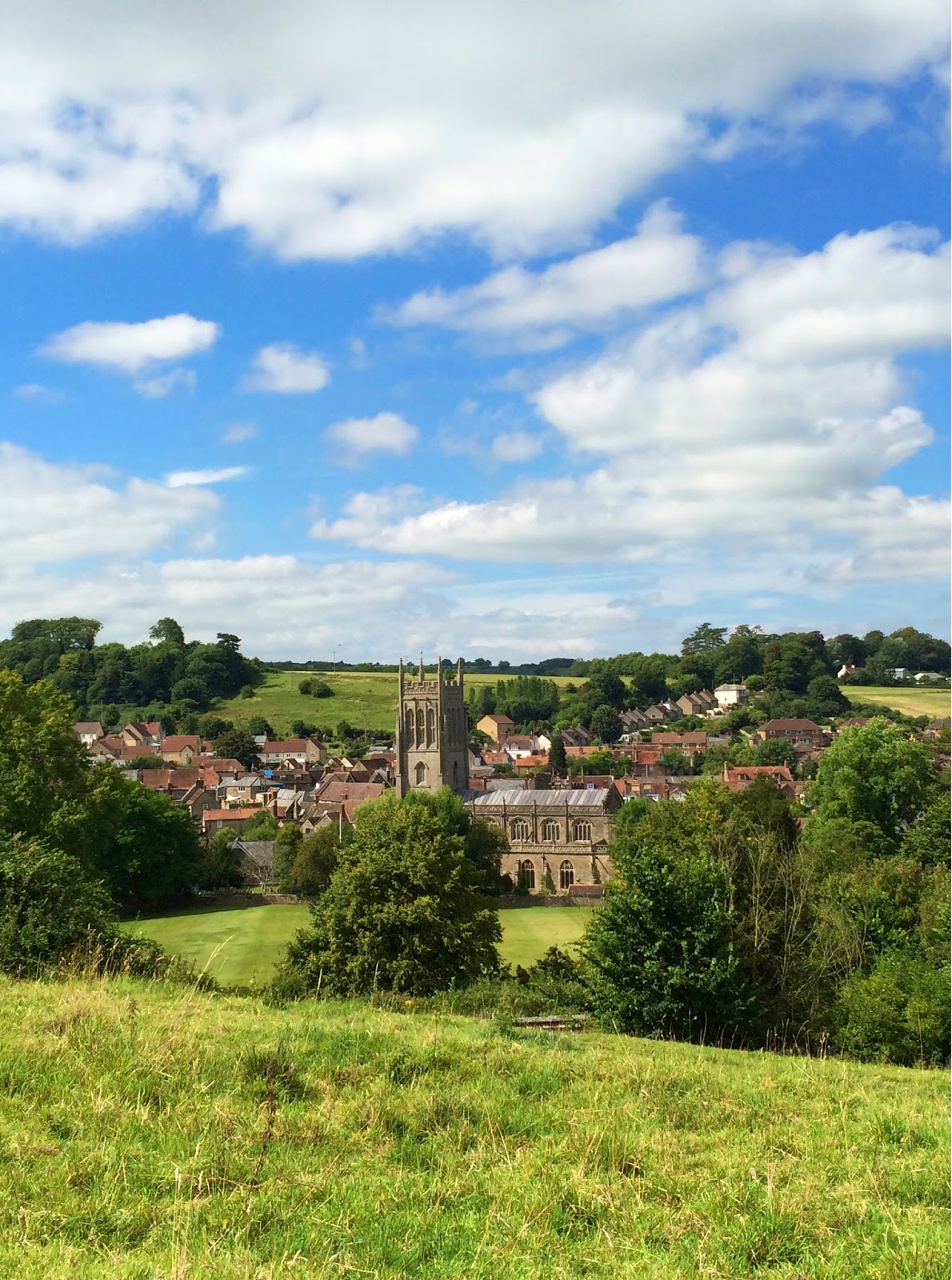 The on-site restaurant and bar, operated by award-winning local hotelier and restaurateur Catherine Butler of At the Chapel in Bruton, is a dynamic curation of gastronomy and contemporary art. Dieter Roth’s son and grandson, Björn and Oddur Roth, have designed the former cowshed into a visual feast for informal dining that serves breakfast through to dinner. Hauser & Wirth manage the late artist’s estate and continue a collaborative relationship with the Roth family. 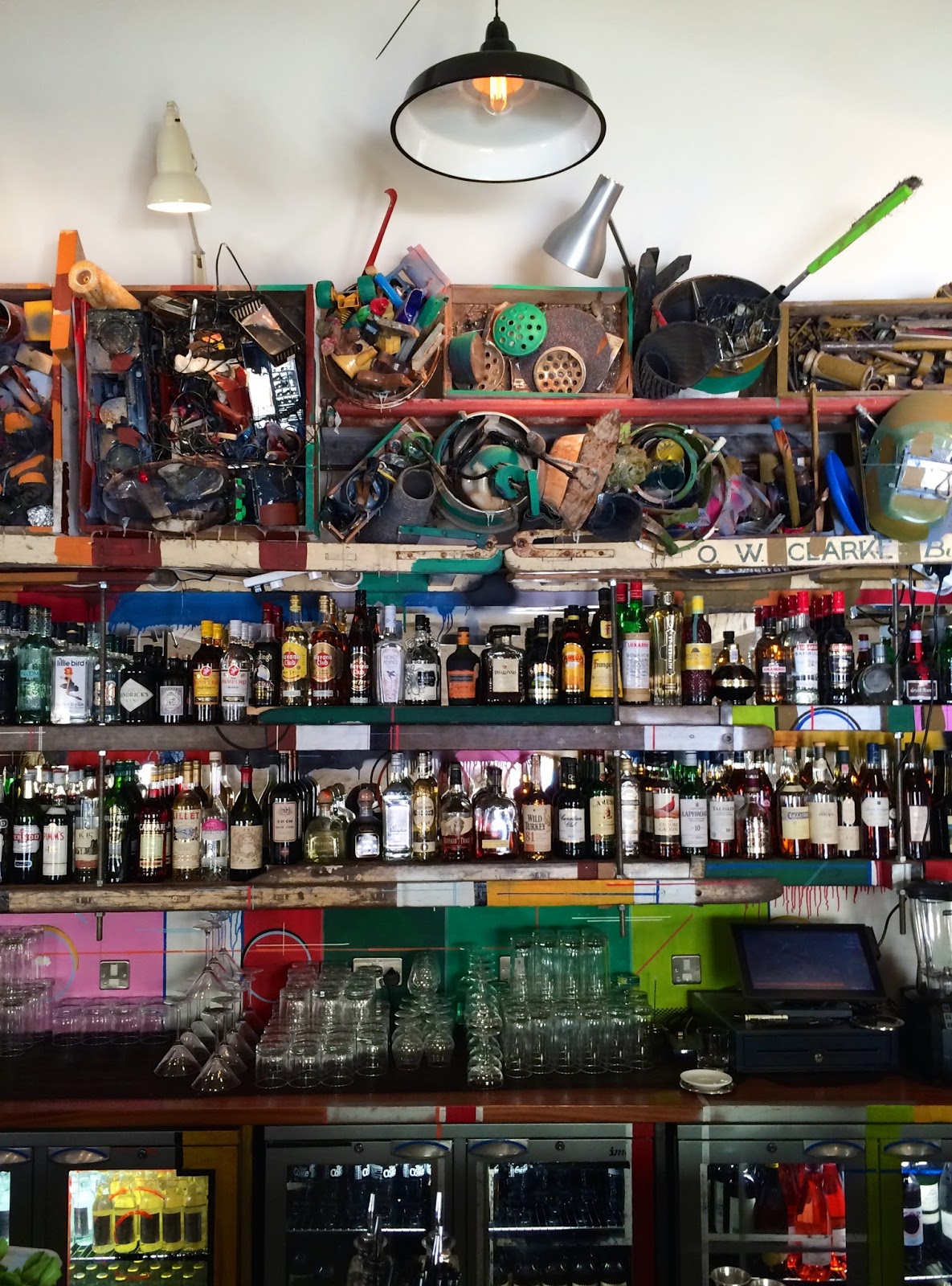 An eclectic array of salvaged materials and objects from reclamation yards from the surrounding area of Bruton echoes Dieter Roth’s own aesthetic during his lifetime. The variety of materials, textures and layers make for a unique sensory experience when paired with the hearty, seasonal menu that is sourced from the estate itself, local farmers, gamekeepers and gardeners. 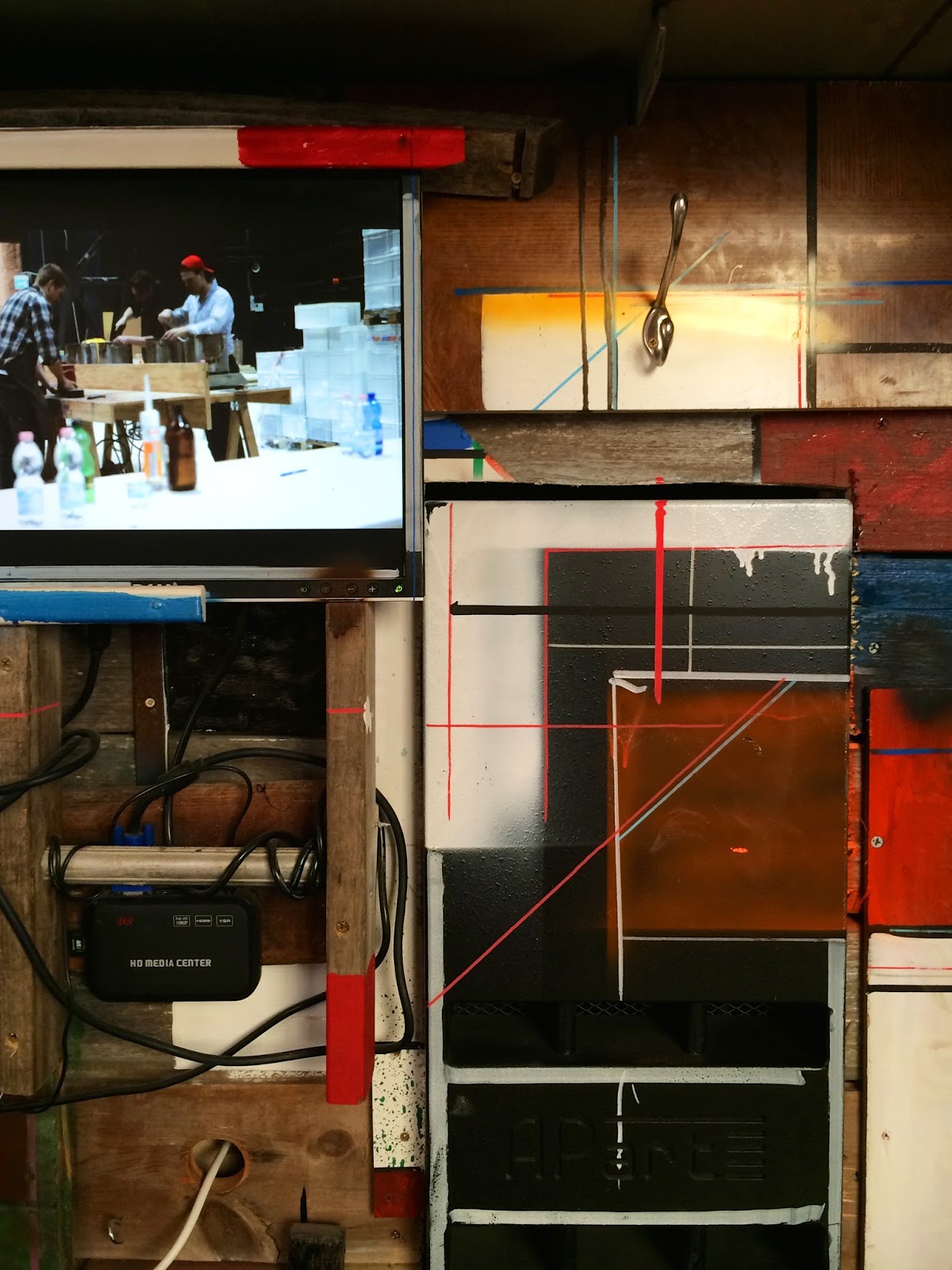 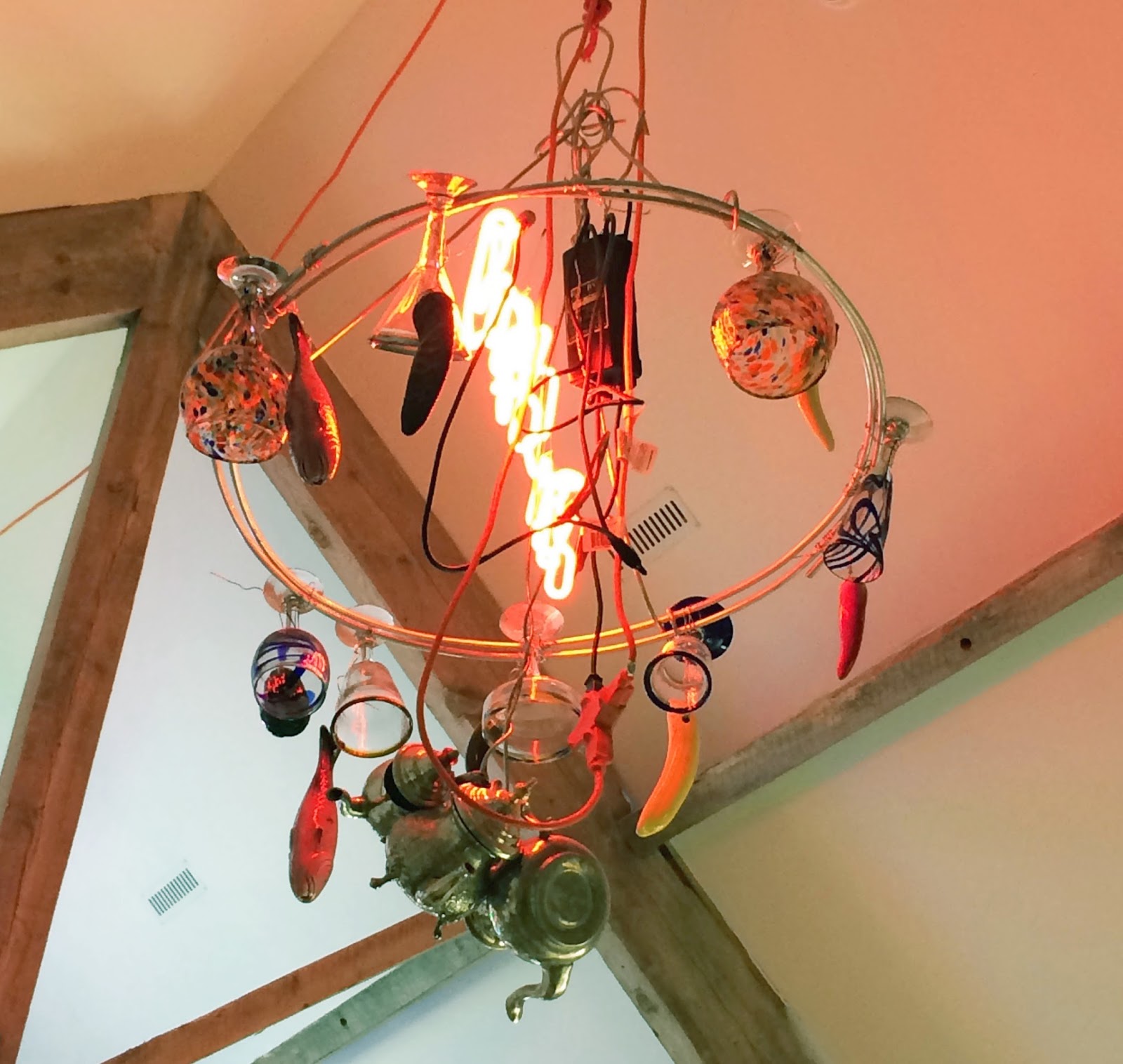 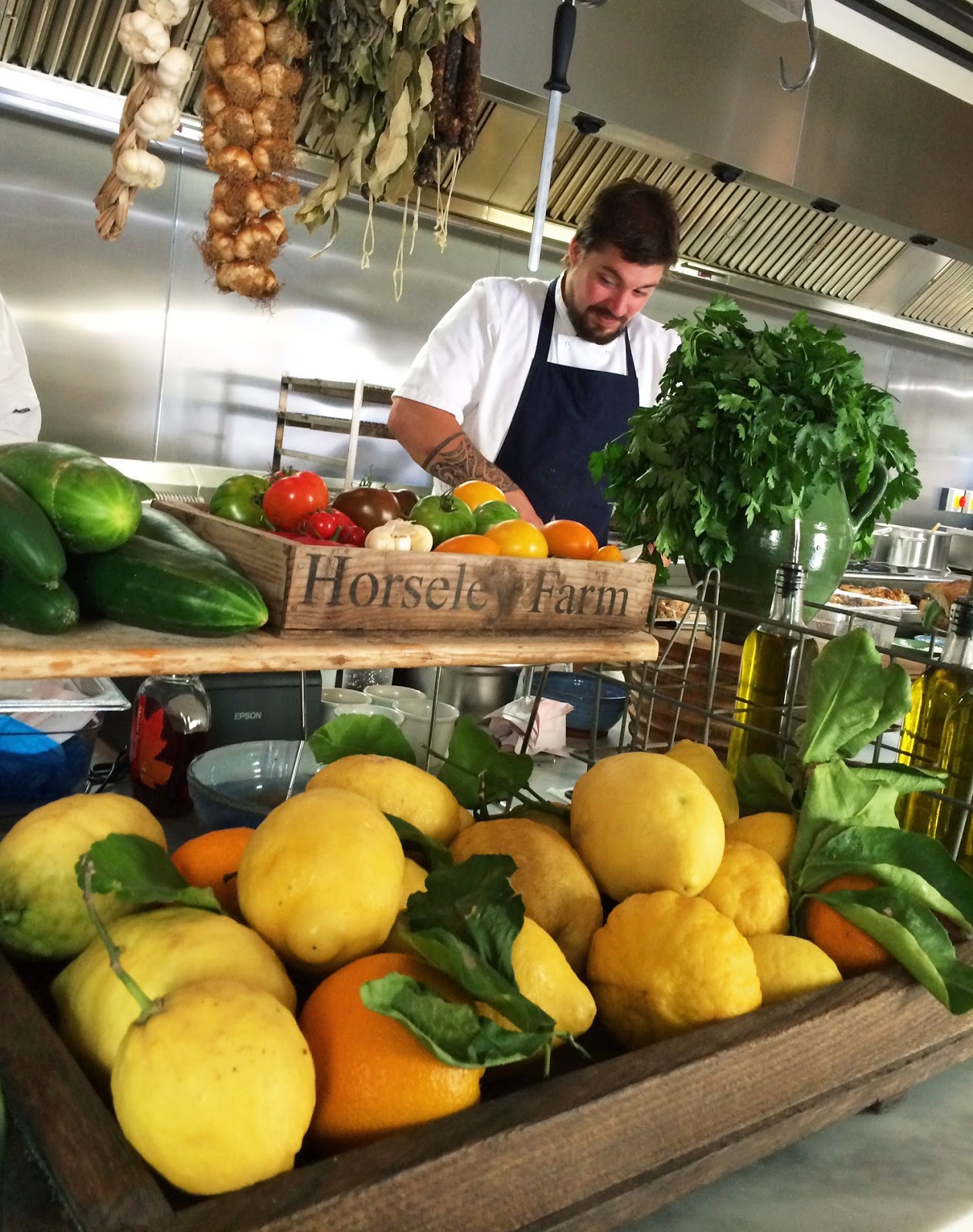 The dining room is decorated with works from Hauser & Wirth’s entire artistic family alongside pieces from the private collection of Iwan and Manuela Wirth. The unpretentious lunch menu offers a selection of chicken, lamb and beef accompanied with a generous selection of green leaves, edible flowers and vegetables du jour chosen by the chef. The monumental bar is well stocked and will make barmen from any capital jealous of the vibrant energy that has been achieved here. 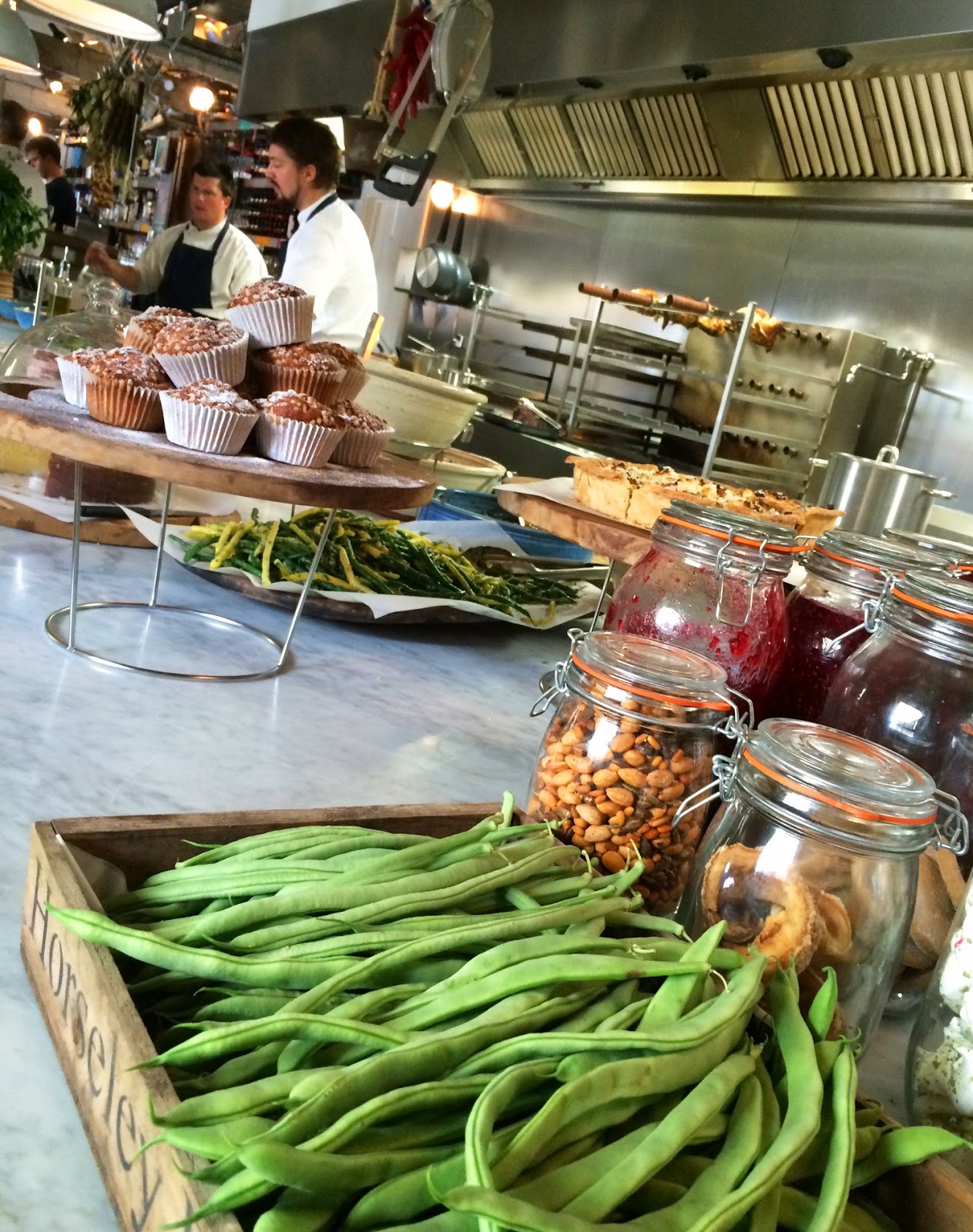 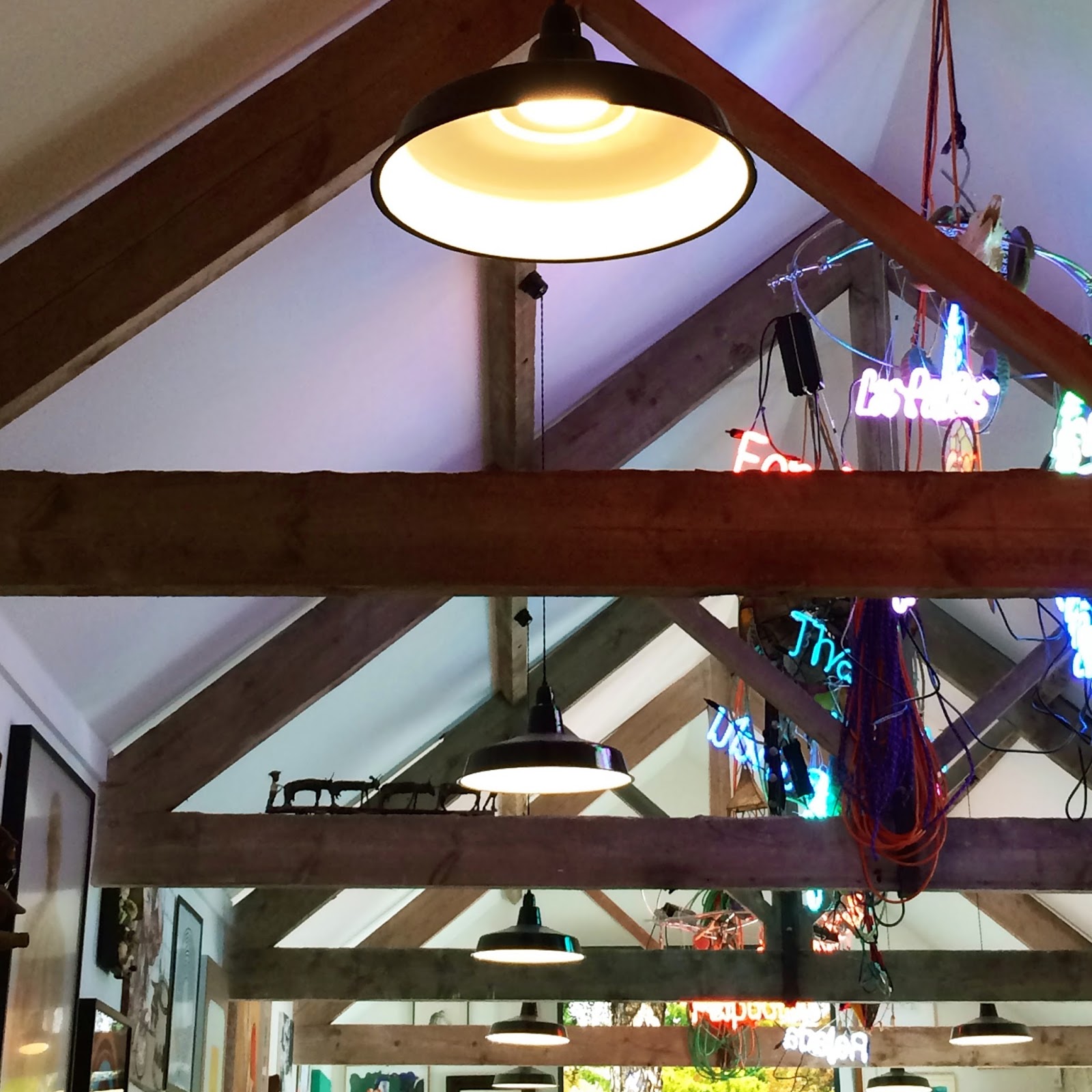 In its opening week, Hauser & Wirth Somerset is already a fine-tuned cultural centre with an exceptional level of customer service that can be found wanting in many already established institutions. Its balance between art, community, land and lifestyle also guarantees its attraction to non-traditional art audiences in the South West of England with a burgeoning educational agenda and an unprecedented programme of exhibitions by international artists to come. Visitors can judge for themselves whether Creed’s prediction that EVERYTHING IS GOING TO BE ALRIGHT is a modest understatement of an ambitious gallery that is unleashing contemporary art beyond the white cube metropolis. 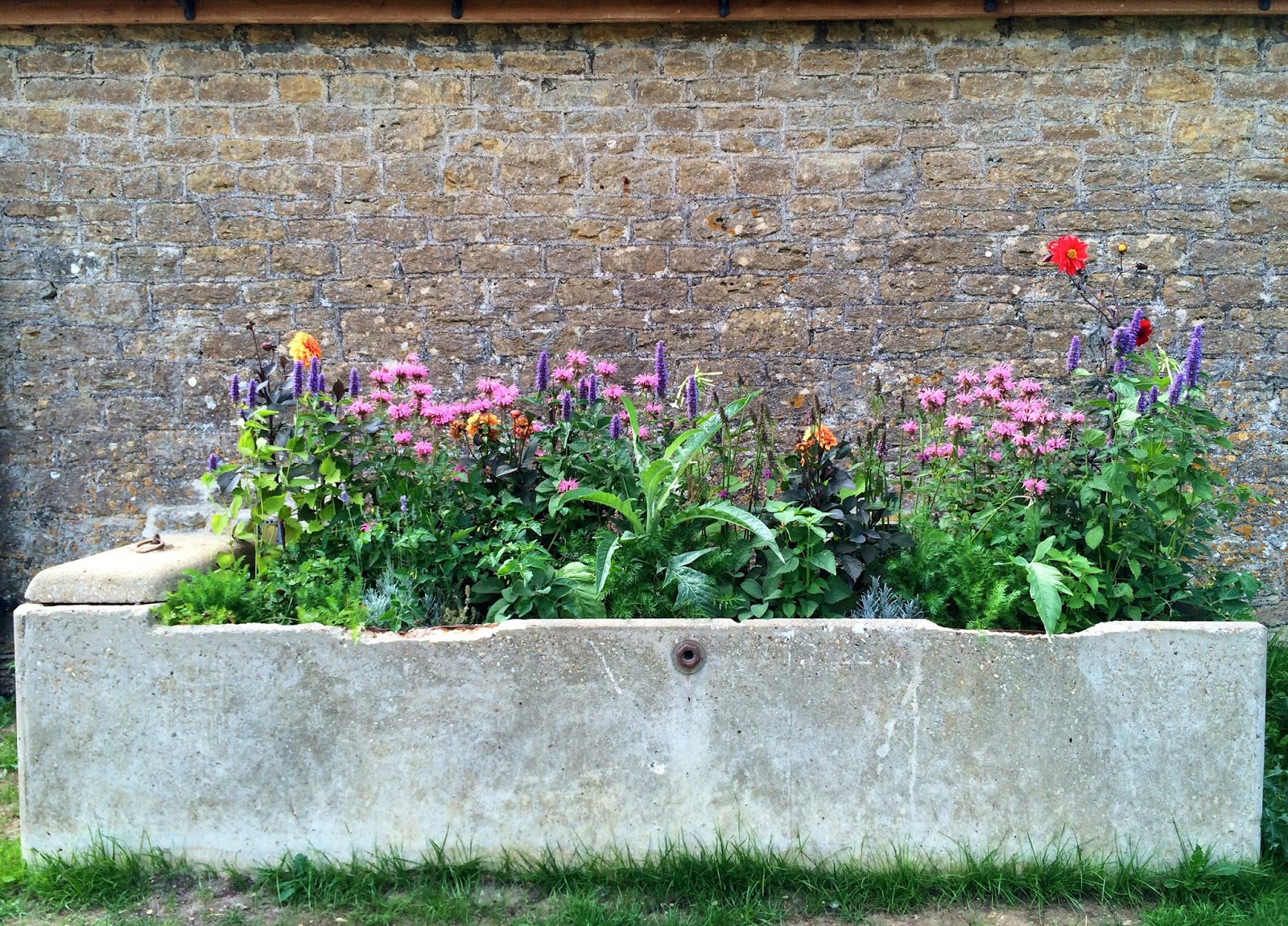 Hauser & Wirth Somerset is open to the public six days a week. GIG by Phyllida Barlow runs to 2nd November and Oudolf Field by Piet Oudolf launches on 14th September.

Posted by Jonathan Velardi at 06:19