For its latest exhibition the Royal Collection explores the sumptuous costume of British monarchs and their court during the sixteenth and seventeenth centuries. The Queen’s Gallery at Buckingham Palace has previously hosted celebrated exhibits such as Leonardo da Vinci: Anatomist and Renaissance works from Northern Europe – all of which are in no short supply in what is one of the finest, and oldest, comprehensive art collections in the world. 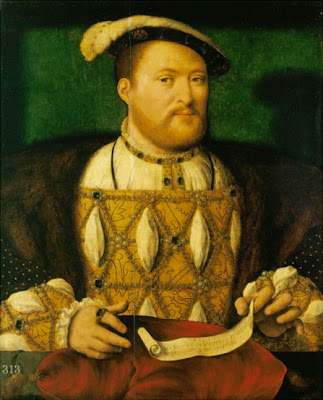 Henry VIII, c. 1530-35 - Joos van Cleve
With over sixty paintings, drawings, garments, armour, jewellery and accessories on display, In Fine Style: The Art of Tudor and Stuart Fashion documents the evolving avant-garde tastes of both royalty and the elite in England and across the Continent.

Speaking with me at a Bloggers’ Breakfast preview, the exhibition’s curator, Anna Reynolds explained the Royal Collection’s new agenda for The Queen’s Gallery as a cultural destination for all interests – akin to its London counterparts such as the Victoria & Albert Museum and Somerset House. Given the collection’s vastness of in-house content and context, traditional and academic themes have tended to be favoured over more popular avenues such as fashion, which incorrectly assumes superfluous and solely superficial status in comparison. What has been the culmination of three years of research In Fine Style is by no means art-lite. The exhibition is a first for the Royal Collection on several counts: it is the first time it has looked at fashion in portraiture; the first time objects have been loaned to the collection, breaking with longstanding curatorial mandate, and the very first time a playlist has been commissioned to accompany the exhibit. Anna proudly describes the collaborative, and eclectic, direction she has successfully achieved – working with The Blackborne Lace Collection at The Bowes Museum to XFM DJ and musician Eddy Temple-Morris and international fashion designer Gareth Pugh – to create a multi-sensory experience of fashion as spectacle as well as its depiction through art, bridging the historic with the contemporary.

As the first monarch to embrace fashion in court, Henry VIII welcomes visitors into the space by way of his potent portrait by Joos van Cleeve. Power was woven into the construct of fashion and there is no better royal than the second monarch from the Tudor dynasty to set the tone of the exhibition in all its rich, allegorical splendour. The meeting between Henry VIII and Francis I of France in 1520 in Balinghem, near Calais, was a dazzling installation by both royal courts to outshine one another using unimaginable quantities of elaborate gold cloth - woven with silk and gold thread - for costumes and the erection of temporary palaces. The monarchs had enforced so much attention to flamboyancy and presentation that the meeting place took the name, Field of the Cloth of Gold, due to is impressive execution and scale, to which this portrait is suggested to commemorate. 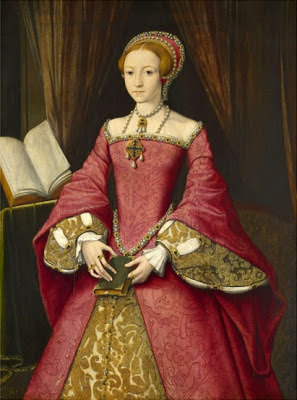 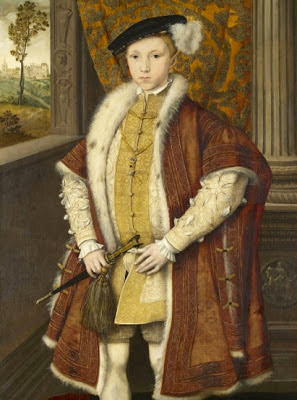 Young Royals power dressing:
Princess Elizabeth I & Prince Edward VI - attributed to William Scrots
This is a fine example of the roles fashion and taste played in communicating wealth and status – important aspects of Tudor life that can be traced down to Princess Elizabeth I and Prince Edward VI, painted by William Scrots, who flank their Father and join members of the Tudor court illustrated by Hans Holbein the Younger. Entry to the royal inner circle, which directly granted political and professional upward mobility, had been largely driven by personal appearance and the cut, cloth, colour and composition of garments and accessories became sartorial symbols of success for both sexes. 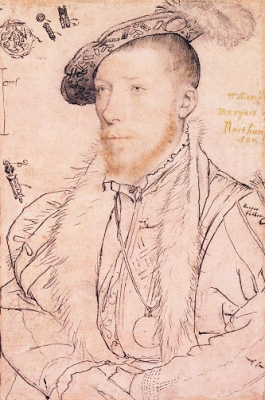 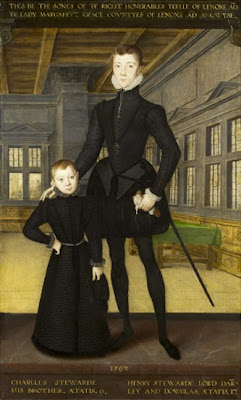 Majestic monochrome: Henry Stewart & Charles Stewart, 1563 - Hans Esworth
In the knowledge that the exhibition has fashion in its title, it certainly triggers one’s attention to the cuffs, ruffs, pattern, pleating, jewels, hats and hairstyles that command equal weight with the historical significance of the canvas within this specific context like never before. In Fine Style questions the extent of the artists’ execution of representing fashion as the genuine article or an interpretation for canvas as not to detract from the subject. This idea of painting as a reliable source is raised in works by Sir Peter Lely who controlled his aesthetic by adapting the sitters’ attire. One of the exhibition’s highlights is a lace cloak band, or collar, reputed to have belonged to Charles I on loan from The Blackborne Lace Collection. The finely embroidered needle lace of linen thread is an exquisite example of technique as well as preservation of its rarity. Its allure is greatly magnified as it stands aside Sir Anthony van Dyck’s enduring triple portrait of the monarch, with only the glass display case separating its contents from canvas with an almost identical representation in form and design of the cloak band, depicted to be worn by the monarch in his profile to the right. 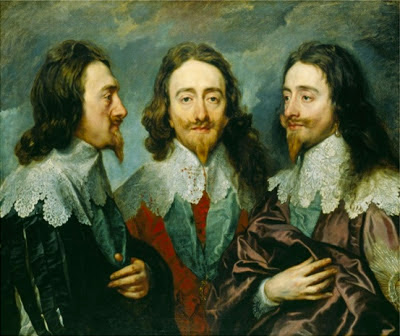 A pair of late-seventeenth century embroidered velvet mules are looked on by their owner Henrietta Maria, wife of Charles I, in a nearby painting also by van Dyck. The dainty heeled shoes that were invented in France to project one’s social standing find themselves in an installation of extremes between the feminine and androgynous as can be seen in the portraits of cover girl for the exhibition, Frances Stuart, in dress and soldier costume – painted by Lely and Jacob Huysmans respectively. Simon Verelst’s portrait of Mary of Modena in a masculine-inspired riding habit also plays with notions of androgyny, the practicality of feminine attire and in this instance, a symbol of her marriage to the Duke of York who wore a similar coat design at their wedding in 1673. 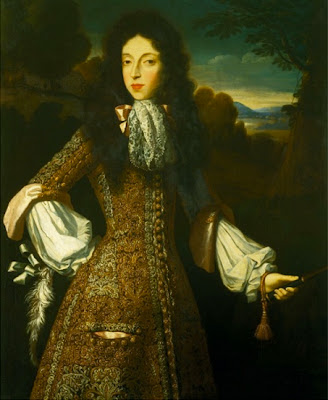 Mary of Modena, c1675 - Simon Verelst
The low hanging installation of paintings is a triumph of intimacy between viewer and canvas. Fashion enthusiasts will no doubt be in their element when confronted with the intricate patterns of stitching or formation of pearls in oil paint and the minute brush strokes that form the illusion of crisp white ruffs that alone would have cost the equivalent of between £10,000 and £20,000 in today’s money.

The detail however can admittedly be overwhelming – even after five centuries, this is a testament to precisely what the royal court intended to achieve in its day. In addition to a video interview (above) with fashion designer Gareth Pugh who points to Elizabeth I as inspiration for many of his collections in his East London studio, the free multimedia guide also provides an excellent escape from up-close examination with a twelve-track playlist curated by XFM DJ Eddie Temple-Morris.
In response to a selection of paintings that are featured in the exhibition, music by contemporary artists have been chosen to complement the works of art and introduce a unique visitor experience walking within the gilded setting that is The Queen’s Gallery. 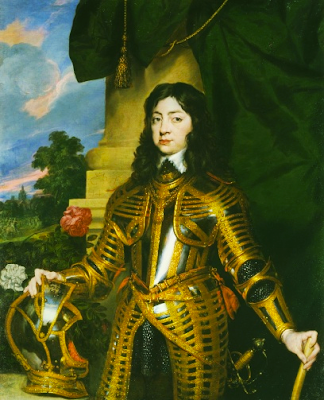 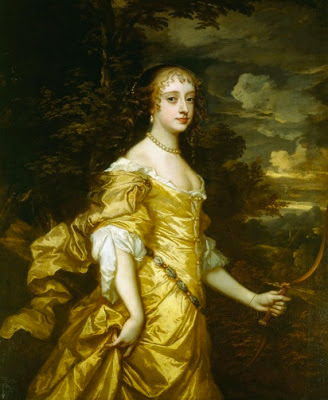 Frances Stuart, before 1662 - Sir Peter Lely
I particularly enjoyed Temple-Morris's choice of Dubstep in Nero's Innocence selected for the magnificent portrait of Charles I’s three eldest children by van Dyck. In 1635 the young Prince Charles  had come of age and therefore wears a golden doublet and breeches to display his loss of innocence, in contrast to the tradition of young boys, as depicted by his younger brother (centre) who wears a skirt. The 2010 release crescendos to a sense of foreboding that not only echoes the young Prince’s imminent future as King, but the state of the country during the English Civil War and subsequent execution of these children’s Father in 1649. 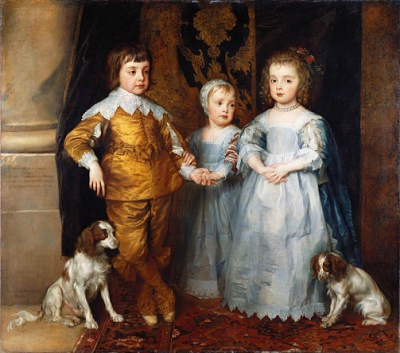 The Three Eldest children of Charles I, 1635-36 - Sir Anthony van Dyck
Armour’s design and styling on the battlefield directly copied fashionable tastes of the time, often with detail found on expensive fabric being replicated in metal through engraving and with additions to produce a highly decorative surface in silver and gilt. An extraordinary display links a miniature of Henry, Prince of Wales by Nicholas Hilliard at the age of thirteen wearing a suit of armour dating from early-seventeenth century France. 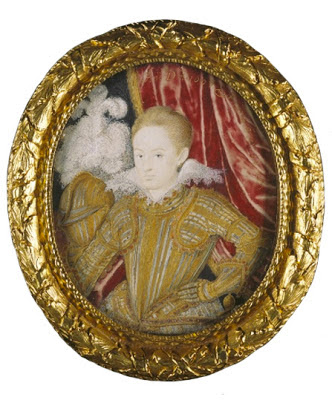 Henry Prince of Wales, 1607 - Nicholas Hilliard
The same armour, or Cuirassier, that Hilliard illustrates can be found adjacent in all its intricate beauty and attention to detail that strikes an image of pure physical strength of the young prince. 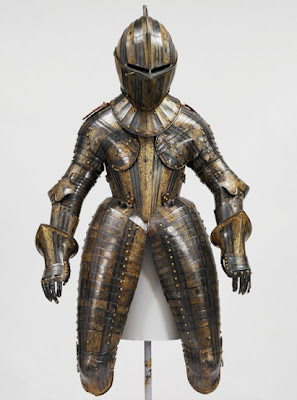 Cuirassier armour, c. 1607 - French
In the final room of the exhibition, Continental tastes are explored as closer relationships are formed between the European courts. On the Continent, fashionable styles were closely linked to political power – Spain’s strong influence coincided with its political dominance across much of Europe in the sixteenth century that was later to be succeeded by France’s supremacy in both politics and fashion under the rule of Louis XIV from the court of Versailles. The English were viewed as chameleons, adopting different elements of costume from Europe as a result of greater circulation of prints and portraiture. It was not until Charles II's reign that a notion of Englishness, portrayed directly through fashion, developed in the eyes of Europe: introducing the precursor of the men’s three-piece suit and abandoning a short doublet and cloak for a long vest and coat – a trend the diarist Samuel Pepys could not resist to replicate. On display are portraits that demonstrate the links and distinctions across Europe that include mirror images of Prince Rudolf and his brother, Archduke Ernest of Austria wearing replica fashions painted by Spanish court artist, Alonso Sánchez Coello and the subtly divine costume of Agatha Bas by Rembrandt van Rijn. 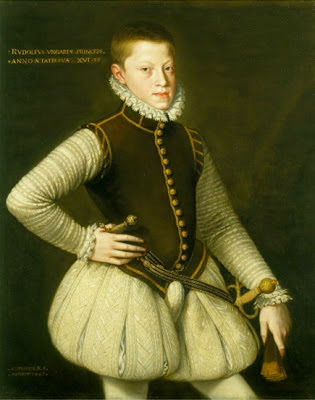 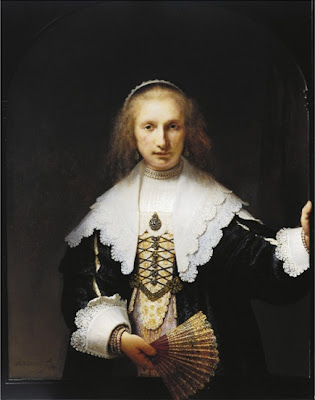 Agatha Bas, 1641 - Rembrandt van Rijn
Fashion is one of very few facets in history that is able to communicate without words by means of a visual and tactile language. When discussing royal fashion, it is impossible not to mention the phenomena of style that has accumulated throughout the centuries to the present House of Windsor who receive fanatical dissection from head to toe. While technology may have opened up the once-exclusive royal wardrobe of material and styles, personal expression through fashion is just as powerful today as it was in Tudor England. From Victorian romanticism to a dapper Duke of Windsor; a colour-conscious Queen Elizabeth II followed by a furlong of hats and fascinators in her reign, to the most recent obsession with the fashionably accessible Duchess of Cambridge. In Fine Style presents an impressive formula for future curation:  in an age when modern monarchy is seen and not heard, it will be their costumes that historians will look to for invaluable messages of evolving identity to expose the social and cultural influences of epochs past, present and future.

In Fine Style: The Art of Tudor and Stuart Fashion is on exhibit at The Queen’s Gallery, Buckingham Palace until 6th October 2013.  For further details about events, educational programmes and ticket information visit the Royal Collection's official website. 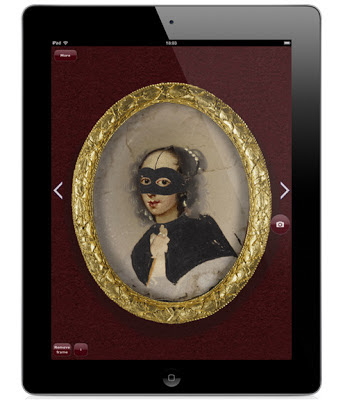 In conjunction with the exhibition, an interactive app has been inspired by a curious portrait miniature of Henrietta Maria that includes hand-painted overlays where she may be dressed in a variety of male and female costume. The free app allows enthusiasts to dress the rich and the powerful from the sixteenth and seventeenth centuries as well as take self-photos and transform into fashionable royalty of the day - available to download from iTunes. 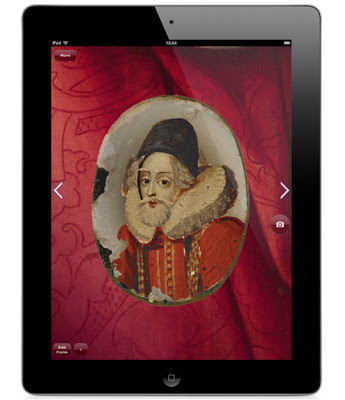 Posted by Jonathan Velardi at 06:17