It is every model and personality's dream to become 'the Face of' for a luxury brand. Every year sees the ratio of model to celebrity who front major advertising campaigns in the luxury market rise, only to be followed by media spin of how much retouching was needed to make said celebrity cover-worthy. From your Bonos to Madonnas, Clooneys and Kidmans, there is no value to what a face can do to a brand. 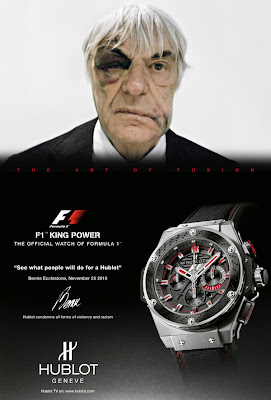 So while it is not uncommon for a charitable cause to be associated with these celebrities and their lucrative contracts, Switzerland's luxury watchmaker Hublot is on the pulse with a very unique direction for it's latest campaign - its new and not-so-perfect face has only just recently been in the media in the last two weeks. Unfortunately it had nothing to do with Bernie Ecclestone's Formula One empire but of news that he was attacked by four men in Central London. With nearly £200,000 stolen, Ecclestone was nonchalant about the incident saying,
"I can understand people wanting to rob me when they are poor and they want some things for the kids with Christmas coming along, but what they did was unnecessary."

Even though the eighty-year-old's face told another story, it was precisely these horrific injuries that Ecclestone decided to contact Hublot and suggest the brand should use his Police booking photograph to advertise the company's official watch of Formula One, which also happened to be the one Ecclestone was wearing at the time of the attack. While the campaign also states to condemn all forms of violence and racism, ever the entrepreneur, a tag line from Ecclestone reads, 'See what people will do for a Hublot'.
Desire, luxury and wit without a trace of retouching: the perfect formula for an iconic campaign. Bravo Bernie!

Posted by Jonathan Velardi at 12:52